This is a spoiler-free review of the first three episodes of Peacemaker. The show premieres on Binge January 13.

The Suicide Squad went down as one of 2021’s best comic book movies. The soft reboot helmed by James Gunn won over critics and audiences with its hyperviolent scenes and adult tone. Gunn further expands the universe with John Cena’s character Peacemaker starring in his own spinoff show. The show utilises the same formula as the film, although leaning more heavily into adult territory through language, violence and some dark themes that aren’t often explored in superhero television.

There are a few familiar faces from The Suicide Squad film and some new additions that deliver a comedy-action series with a twisted James Gunn edge worth watching.

Picking up right where TSS left off, Peacemaker (John Cena) is recovering in a hospital ward from Bloodsport’s bullet under the watchful eye of Emilia Harcourt (Jennifer Holland) and John Economos (Steve Agee). They are being punished by Amanda Waller (Viola Davis) for their part in the revolt in TSS. When Peacemaker is discharged from hospital, he returns home to his father, Auggie (Robert Patrick), who has been taking care of his sidekick, a bald eagle named Eagly. Not content to let him live out the rest of his prison sentence, Peacemaker is recruited by Clemson Murn (Chukwudi Iwuji) for another black ops mission called Project Butterfly. Together with Agent Adebayo (Danielle Brooks), they form a group to erase the threat, enlisting Peacemaker as the hitman who under his motto of “Peace at any cost.” 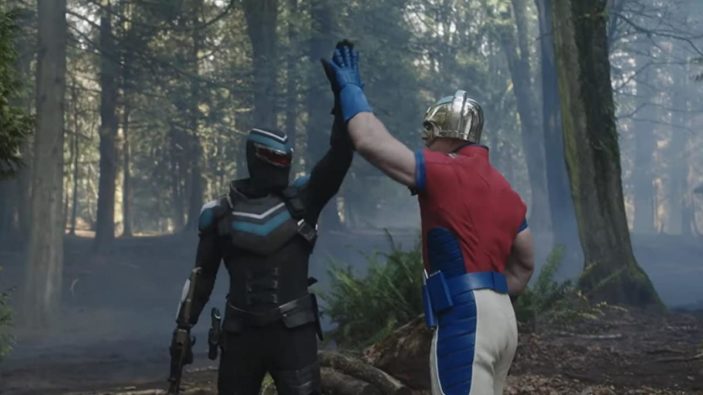 What’s clear the second from the show’s introduction of Chris Smith standing in a hospital nightgown, his bare bum exposed talking to the janitor Jamil (Rizwan Manji) about getting high together and their banter, you immediately pick up on Guardians vibes with an edge. The dialogue rolls quick and fast with punch line after joke after insult combined with gun-wielding, blood-splattering action. The main difference I found in the character of Peacemaker, he is a lot more sympathetic this time around. An apparent effect of what happened in the film is starting to question his “Peace at any cost” approach. This allows for a deeper dive into his character and Smith’s relationships with the team, particularly that with Adebayo to be the story’s heart.

Speaking of Adebayo, Brooks is the perfect fit for this role. She brings a wide-eyed innocence to the character, desperately trying to fit in and make a name for herself. The two agents, Harcourt and Economos, are uptight and feeling the weight of their punishment for being there, while Adebayo has something to prove. Her view of Chris as being “sad” and wanting to explore further while she is discovering all of the things that Amanda Waller has done takes her on a journey of self-discovery that holds the team together. Cena is in full swing, fitting comfortably into the role, his comedic timing is perfect, and there is a level of confidence that cement this shows reason to exist. 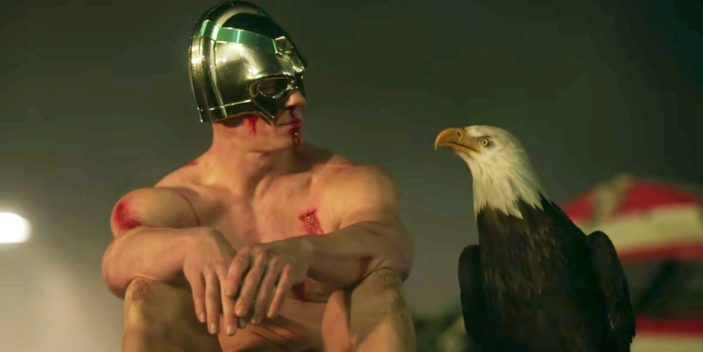 By far, the most surprising part of the three-episode arc is how Chris, aka Peacemaker sees himself as a superhero. He truly believes in what he is doing, Peace at any cost, no matter how many men, women and children he has to kill to get it. To see that with a question mark after it and the morality that Adebayo’s character brings into question in the ruthless world of Amanda Waller is just beginning to unravel in the first three episodes. Gunn has ensured that the dialogue is sharp and fast and then allows for things to slow down with emotional scenes between Chris and his openly racist father and any scene with Adebayo and Chris showcases a softer side and allows the dialogue to slow down and breathe. I would be remiss if I didn’t mention Eagly, the beautiful effects on the eagle are spectacular. Some of the most intimate moments with Chris are with Eagly.

Peacemaker is a sure-fire hit with razor-sharp dialogue, bloody over the top action and an engaging story that allows a deeper dive into these characters and the world around them. The first three episodes offer a glimpse into this world and will have you wanting more. The scope of the world is quite contained and this works to its advantage. There is a hint at darker themes to come and we can only hope that the laughs and action keep up with these first three episodes.

The first three episodes of Peacemaker premiere Thursday, January 13 on Binge. The season will then release with weekly episodes.