Being a fan of a good binge, and also a fairly avid fan of the Marvel universe I took the plunge and I’m here to give you my top 5 (in no particular order) reasons you too should watch Jessica Jones – if you haven’t done so already. I’ll try to keep this as spoiler free as possible but please be mindful that discussions relating to characters and traits will crop up so minor non-plot related spoilers may arise.

1. A plethora of badass and complex female characters

In a time where the push for feminism and equality for women in media and entertainment has been gaining more awareness we are finally given a show that does a damn good job of packing all the ladies in. Firstly you have our lead in anti-hero Jessica Jones (Krysten Ritter), there’s her best friend Trish Walker (Aussie actress Rachael Taylor), then the cunning hot-shot lawyer Jeri Hogarth (Carrie-Ann Moss) fills out the main trinity. Then there’s also Pam (Susie Abromeit), Jeri’s secretary and mistress, as well as Jeri’s wife Wendy Ross-Hogarth (Robin Weigert), innocent victim of manipulation Hope Shlottman (Erin Moriarty) and Dorothy Walker (Rebecca De Mornay), Trish’s mum, to add to the female casting list. All of these women have significant onscreen time, and have meaningful discussions that aren’t about men and even though technically this isn’t a film, it pretty much smashes the Bechdel Test.

Jessica’s “superpower” is that she’s physically strong enough to throw guys double her size across the room and jump ridiculously high. Trish is Jessica’s best friend and plays the voice of reason and after years of living with Jessica is immune to her snark and scathing remarks. Jeri is a partner at one of the leading New York law firms and nobody gets to that high level without a fierce streak and a high IQ. They did a gender-flip with Jeri’s character too, turning her from a man (in the comics) into a woman and making her a lesbian which also adds to the diversity. These three lead women in particular are all littered with flaws and extremely complex in many ways and thankfully having a 13 episode series enables us to delve occasionally into their back stories or personality traits to make them feel fleshed out rather than superficial. 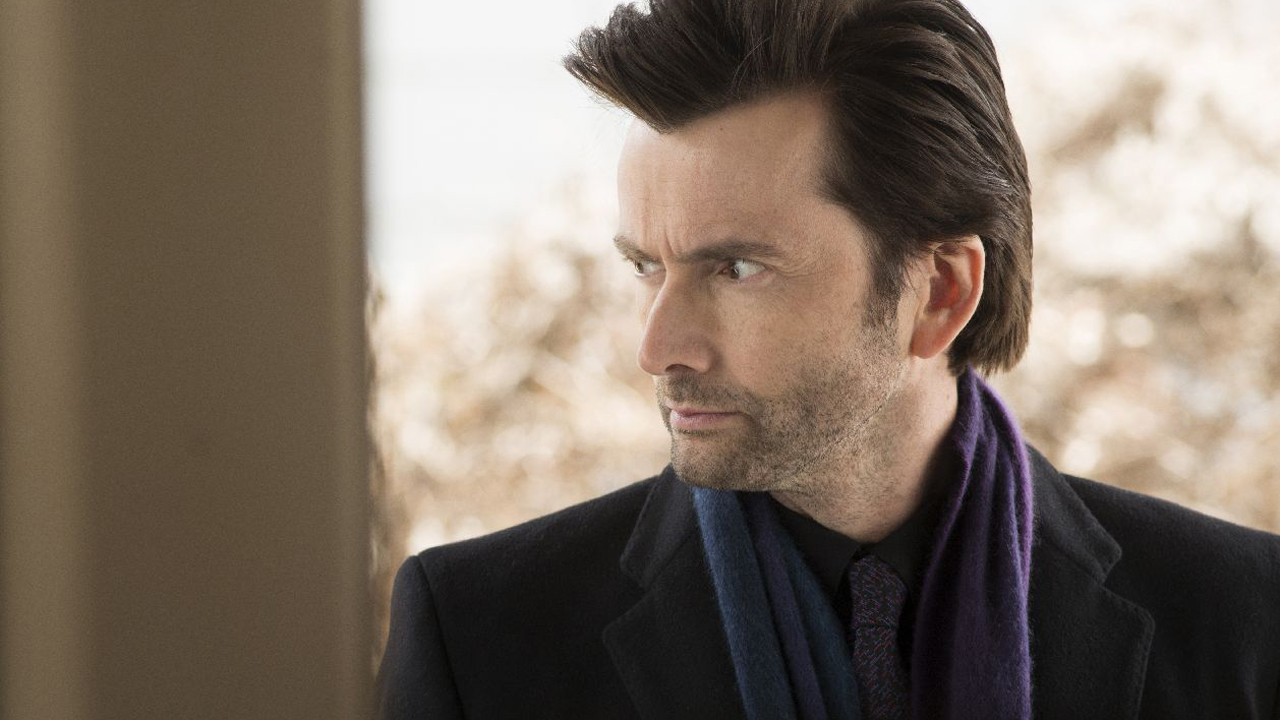 2. David Tennant as Kilgrave (aka The Purple Man, aka The Villain)

I’m sure most people would be familiar with David Tennant’s stint on Doctor Who. Playing the rogueish alien-conquering Doctor travelling through time and space. British drama fans would also be familiar with his work on Broadchurch (or the US spin-off Gracepoint) as a broody police detective. But Tennant has done a couple of roles that delved into the ‘dark and creepy’ territory, there was his brief stint as Barty Crouch Jr in the Harry Potter franchise and also portraying a psychotic stalker in a little known TV movie called Secret Smile.

This latter work very much mirrors a lot of Tennant’s stint as Kilgrave, the man with mind control power. Kilgrave is driven by obsession and prepared to do anything in order to get what he wants. He knows no bounds and Tennant’s performance excels at tiptoeing the charming / creepy line at every single turn. One minute he’s being all sweet and lovely, the next he’s ordering people to kill themselves. He’s almost like a petulant spoilt child but trapped in a man’s body. But the thing that ultimately is the masterpiece here is Tennant’s ability to make you sympathise for the character. If you doubt his villainy or treachery for a second or you feel your heart break as he describes his tortured upbringing, Tennant’s performance and the script has done its job of convincing you that there are far more layers to this “bad guy” and that not everything is quite so black and white. 3. The characters are real people too

Yes this is a comic book adaptation, yes this is set in a fictional universe, but it’s also supposed to be a reflection of our reality. With Jessica Jones we’re thrust into the world of the dirty and grimy detective work of being a Private Investigator. Jones even makes a comment about how it’s a job and it has to pay the bills. Throughout the course of the show we’re introduced to characters who are going about their daily working lives and trying to make it in New York. Trish Walker is a radio talk show host, Jeri Hogarth an influential high-end lawyer, while her wife Wendy is a doctor. We meet Luke Cage (Mike Colter) a bar owner, and fellow “gifted” invidual. There’s Malcolm Ducasse (Eka Darville), Jones’ neighbour and drug addict who with Jessica’s help manages to get clean.

Also unlike in the film universe where it seems saturated with superpowers, the TV shows prefer to push the normal aspects and day-to-day lives that our heroes lead. This happened with Marvel’s Daredevil, where Matt Murdock’s lawyer by day contrasted with his vigilante by night activities. Though in a slightly different turn, Jones’ character heavily uses her PI skills and know-how to tracking down her target. The only time she uses her abilities is when she meets an obstacle like a padlocked door or leaping up to a second storey balcony. Then of course there’s her alcoholism, not that we’re condoning that, but I’m pretty sure if you’d spent your time being mind controlled by somebody to kill people you’d end up drinking litres of whiskey every night too. It just feels refreshing to see characters so affected both physically and mentally by the fallout of all the crazy going on around them.

4. The debate and psychology of mind control

In Episode 8 of the series Jones confronts Kilgrave over their earlier relationship. One of the most emotionally gripping scenes is where she basically drops a truth bomb, calling his behaviour and their relationship a form of rape. The fact that they had sexual intercourse but that his ability to control her mind left her without consent is tantamount to it. There’s no skirting of the issue, there’s no sugar-coating it, Jones and the scriptwriters call it for exactly what it is. There’s also the hallucinations and PTSD she suffers from in the early episodes. The writers clearly make a case for the fact that being emotionally and physically manipulated can leave you messed up. And let’s not forget the oh so subtle dig at misogyny and sexism with Kilgrave forcing Jones to “smile”. Its presumption of famliarity and also dictation of behaviour is something that happens to women frequently.

Then of course on the flipside of this is Kilgrave’s inability to build adequate social relationships with those around him because they’re all robotic drones to his commands. He’s unable to have any sort of normal interaction because whenever he tells people to do something they do it. At one point he comments about how boring it is, and he’s right because he’s trapped in a world where nobody can argue against him or lie to him (unless he tells them to). It would probably be an extremely difficult way to live and you’d need a strong moral compass to not exploit that power. The series definitely attempts to examine the darker side of the psychology behind the notion of mind control and portray characters onscreen who are struggling with these issues. 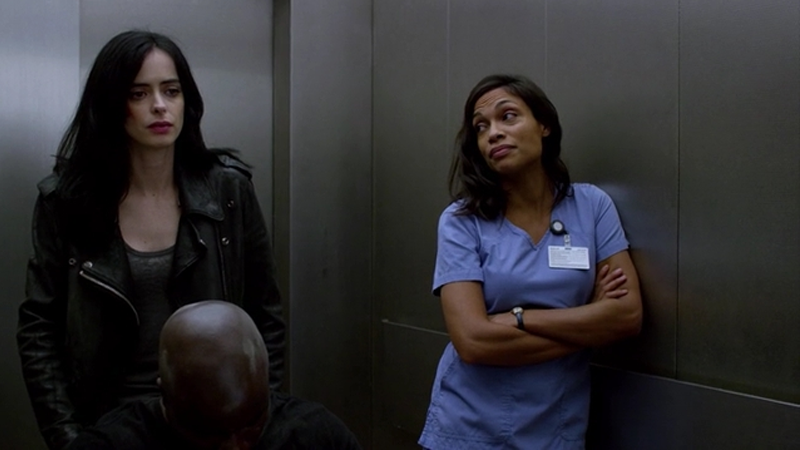 For those who watched Marvel’s Daredevil earlier this year we were introduced to the first TV series to come off the Netflix / Marvel collaborative train. Not only did Daredevil set the bar ridiculously high for any Netflix/Marvel shows to come after, it raised the bar for shows in general period.

Thankfully, Jessica Jones has managed to maintain those expectations. If you’re a fan of the Marvel Cinematic Universe (MCU) you may have noticed a few easter eggs and hints being dropped through the course of Daredevil and the same goes with Jessica Jones. Mentions and alluding to the events of the war against the alien Chtauri from The Avengers (often referred to as “The Incident”), as well as seeing kids dressed up like Captain America and The Hulk we are reminded repeatedly that people are becoming aware of these superheroes and their powers.

But we have a direct and specific crossover with the appearance of Claire Temple (Rosario Dawson) in the Jessica Jones world. She never says his name but mentions “her friend who could maybe help” who clearly is Matt Murdock/Daredevil. The Marvel camp has hinted at the possibilities of these characters eventually teaming up but first we’d want an actual episodic crossover to happen where the characters show up in each other’s shows. At least we know that it’s leaning into the “more than likely to happen” category.

There are quite a few other reasons I could’ve listed but these are some of the strongest as to why you should check out Marvel’s Jessica Jones if you haven’t already. Don’t be fooled or put off by the trailer and it’s dark overtones. This series tackles some of the hard hitting issues like trauma and abuse in a way that makes it accessible and even on the odd occasion witty or funny. Also the storytelling and narrative is compelling and by the end of each episode you sink deeper into it and are compelled to watch another, it’s always the sign of a good binge watch when you can’t stop and Netflix caters to this perfectly with it’s 15 second autoplay feature. So put yourself in a comfy spot and settle in for a good 13ish hour marathon, it’s unlikely you’ll regret it.

Jessica Jones is available on Netflix now and presumably forever.