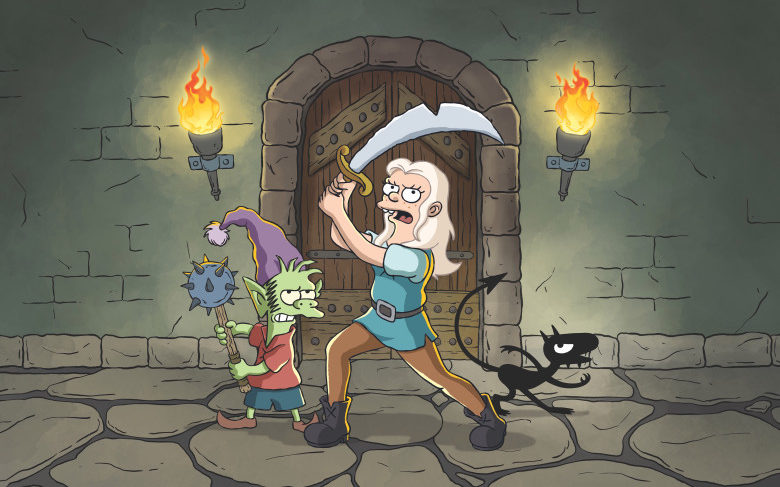 The Simpsons creator Matt Groening is back with Disenchantment, his first new animated series since Futurama dropped way back in 1999. Disenchantment is a medieval fantasy which follows the adventures of rebellious princess and self-proclaimed alcoholic Bean (Abbi Jacobson), her elf sidekick Elfo (Nat Faxon), and her trusty personal demon Luci (Eric Andre) through the kingdom of Dreamland.

Note: This review is covering episodes 1-7 without spoilers.

With Disenchantment being released on Netflix, one of the most major differences to Groening’s previous shows is how the overall structure is handled. As oppose to the 20-odd episode seasons of The Simpsons and Futurama, Groening has opted for 10 episode seasons with each episode pushing 25-30 minutes in length. This is somewhat similar to how other modern adult comedies such as Rick and Morty are delivered.

These changes affect the way storytelling is approached throughout the season; thankfully in a good way. As oppose to the more episodic focus of the previously mentioned shows, Disenchantment has more of a serial format over the course of the season. This helps to introduce the lead characters very efficiently within the first few episodes, and we see them develop from there. You get to know them more and see how they grow or don’t grow from episode to episode based on what happened previously. There are smaller secluded stories within each episode, but there is still a larger plot at play that links all of the episodes and allows things introduced in episode 3 to play a part in episode 7. I mentioned it helps with character growth but it also gives the audience added incentive to tune in to every episode and not miss a beat.

Not all of the stories within the episodes work, however, some are great and stand out above the rest, but then you get the occasional episode where the focus isn’t as engaging. There isn’t an episode in the season (so far) that I couldn’t find any enjoyment in whatsoever; each entry having at least one hook to keep me engaged to its end. But there are still noticeable dips in some of the episodes where the comedy or the story isn’t as strong. 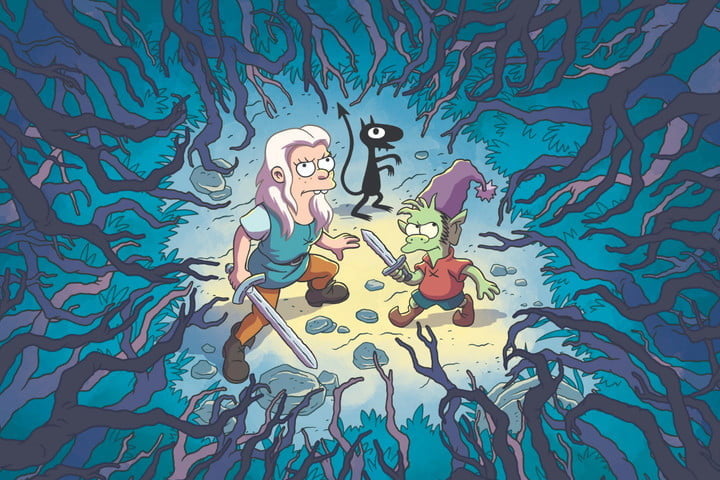 Going into the season I wasn’t entirely sure what the tone of the comedy would be, but I had my assumptions based on the fact that the lead character is a drunk. The tone is reminiscent of Futurama, in the way it’s delivered, but is most certainly a little more on the darker side than Futurama was. There are some certainly grim themes throughout the season, which I guess is derived from the fact that the medieval period wasn’t exactly overflowing with joy. But at the same time, it isn’t dark to where it forgets to deliver laughs, which it does well within each episode.

When it comes to adult animated sitcoms, there are the occasional jokes that don’t work or don’t hit quite as well as expected and Disenchantment is not exempt from this. Some jokes do fall flat but they don’t leave a stink on the episode as the pace is so quick that before you can be disappointed they’ve moved on. The quick and witty delivery of the comedy does catch you off-guard most of the time and there are definitely some good laughs to be had.

The voice cast is another strongpoint of the season as the leading trio of Abbi Jacobson, Nat Faxon, and Eric Andre have some strong chemistry and make this unlikely group of friends work. Abbi is the strongest of the group from a performance standpoint. Being the focus of the show, she really brings Bean to life and makes her a very likeable protagonist you can’t help but root for. Luci is maybe my personal favourite character and Eric Andre is the perfect choice to play the mischievous hell-spawn. His dry delivery of comedy is an entertaining contrast to what Nat Faxon does with Elfo and they bounce humour off each other in a number of scenes. I need to mention John DiMaggio who plays King Zøg and does a great job at really making this secondary character memorable. His relationship with Bean is one aspect of the season I liked as it takes the heartfelt route sometimes and delivers a bulk of the emotion but also doesn’t stray from the overall tone.

In the end, Disenchantment is an enjoyable series with some good adult humour and a strong group of lead characters to follow through the season. The serialised approach to storytelling as oppose to the episodic storylines of Groening’s last two projects helps to retain engagement in the show all the way through. The characters develop through each episode and it’s nice looking back at earlier episodes and seeing growth in the relationships. Some storylines and dips in comedy hold it back, but I’m interested in seeing how it develops going into future seasons.

At 10 episodes, it’s a quick watch and fans of Groening and this style of adult comedy will no doubt find themselves very much at home with Disenchantment.

All 10 episodes of Disenchantment will be streaming on Netflix from August 17. Images courtesy of Netflix.