Maika is a flawed family film that has plenty of energy and charm but not enough innovation: Sundance Film Festival Review 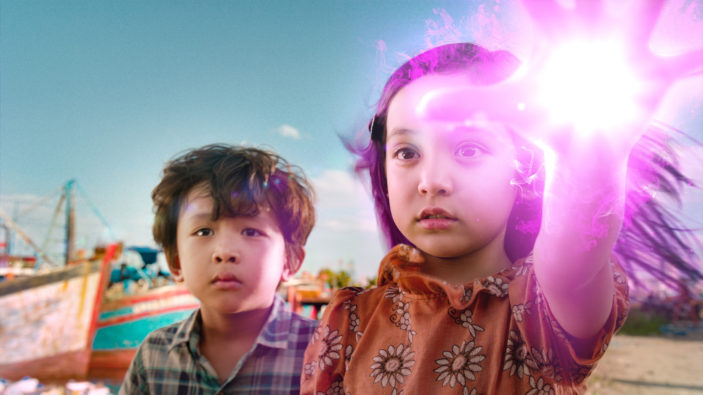 Maika tells the story of Hung (Truong Phu), an 8-year old boy who is grieving over the loss of his mother who had died almost a year ago due to a severe illness. One would think that this type of emotional baggage is bad enough. However, it not only rains but it pours. His best friend is moving away, the family is in massive debt, his relationship with his father (Ngoc Tuong) is distant and greedy landowners are bullying the family into selling their apartment in order to build a new complex.

One evening, he sees a meteor shower and a falling star that lands near the vicinity of a lake. As he ventures over to the blast area, he realizes that what landed is not a falling star, but an extra-terrestrial being known as Maika (Chu Diep Anh). She is on a quest to find her comrade in order to go back home and Hung decides to help her after establishing a friendly bond. But with authorities, greedy thugs and numerous suspicions from loved ones, it is going to be a tumultuous journey for the intrepid pair.

Maika is the latest film from Vietnamese-American director Ham Tran, who is best known for making commercially successful pieces like the light-hearted caper Bitcoin Heist, the spooky horror flick Hollow; as well as gaining fame and kudos for his breakout film Journey From the Fall. For his latest, he takes inspiration from a popular Czechoslovakian TV show of the same name and has made a sci-fi family film. The genre of sci-fi has not been explored that much in Vietnam so the venture into the genre sounded quite interesting.

Even with its five credited writers and its credited source material for inspiration, the film still feels quite derivative and restricted by formula. The comedy may be completely low-brow (with numerous fart jokes and slapstick) but the timing of it is solid and the cast deliver it with solid conviction. The screenplay is incredibly derivative and predictable. Child makes friends with alien creature? Check. Child helps alien creature evade authorities in order to get back home? Check. Child learns life lessons? Check. Child repairs bond with parental figure? Check. Alien creature ends up in jeopardy? Check. All the cliches are present here and are executed with almost checklist-like precision; including morals being mentioned out loud. Consequently, it will disappoint those who expect something different.

However, the film almost overcomes the flaws with a charming cast, infectious enthusiasm and energy and a decent amount of heart. The screenplay does show minor amounts of creative inspiration. The best example is the motivation of the villains. While the motivations of the land developers are clear-cut (to an almost Home Alone, pantomime-like degree), one other villain’s motivation squares around bringing Vietnam on the international map along the lines of nationalism. The fact that it was more than greed and about something much more ideal and bigger than him does hint of social commentary of how Vietnam fits in international culture.

As for the cast, Truong Phu displays enough emotional intelligence and rapscallion energy to be an engaging lead while Chu Diep Anh is good with her otherworld presence and understated physicality in portraying the alien creature. Tin Tin steals the show as spoiled rich kid Beo (his name translates as fat) while the supporting cast including Ngoc Tuong (as Hung’s father) and Kim Nhan (as a family friend) provide dramatic credibility; particularly in the case with the former who shares a compelling bond with Phu as father and son that makes the drama feel genuinely heartfelt.

As for the film’s flaws, the CGI is very spotty that it distracts audience from the fantasy of the story. The runtime of almost two hours will definitely wear out viewers including both its target audience and adult viewers. For a story as simple as the one in Maika, some of the comedic hijinks and dramatic subplots could be shaved off for a suitable ninety-minute runtime, easily. Another major flaw is the anti-Japanese sentiment running throughout the film. The land developers are led by a boss character with a Japanese fetish (complete with yelling incredibly offensive words, using samurai swords and referencing ritual suicide) and it is all played for laughs; resulting in a very bad aftertaste.

Overall, Maika is very modest with its goals as a family film and on that bar, it succeeds with genuine charm and energy. Unfortunately, the over-long runtime of close to two hours make the pacing feel interminable and the anti-Japanese sentiment is just in very bad taste.

Maika is screening as part of this year’s Sundance Film Festival, which is being presented virtually between January 20th and 30th, 2022.  For more information head to the official Sundance page.