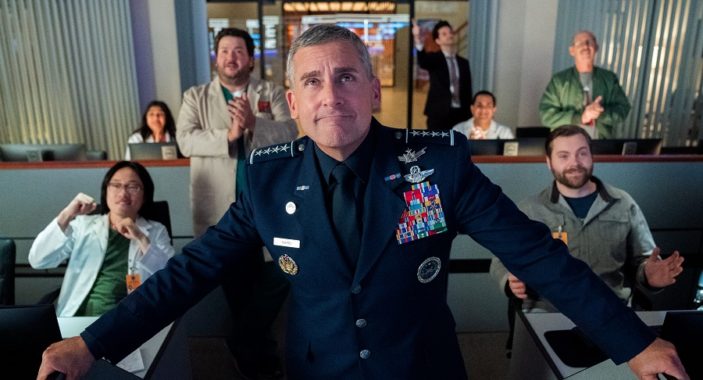 With the creative pedigree of both Steve Carrell and The Office’s Greg Daniels behind Netflix’s latest comedy series, and attach that to a send-up of the recently canonized Space Force, the newest military branch of the United States defence forces. The result is a series that doesn’t entirely misfire but also fails to reach the stratospheric heights of other comedy or satire series that have come before.

Newly minted four star General Mark R Naird (Carrell) is tasked to lead the new Space Force, a disappointing blow considering that he thought he was next in line to chair the Air Force. Forced to ship his wife Maggie (Lisa Kudrow) and teenage daughter Emily (Diana Silver) out to a remote not-so-secret base in Colorado. A year later and he has barely managed to achieve a single successful rocket launch, the agency is hemorrhaging money and it’s the laughing stock of the other military leaders. Yet despite the absurdity of the agency’s existence, Naird makes the best of a bad situation and consistently tries his best.

The idea of lampooning the real Space Force seems, on the surface, to be an easy target. Daniels and Carrell teaming up with a variety of directors and writers though means the tv show result is a little tonally messy. The series also lacks the true bite and spite of a show that wants to satirize the whole scenario. Instead opting for obvious nods like stilted tweets signed off by “POTUS”, the ‘Angry Young Congresswoman’ who is clearly an Alexandra Ocasio-Cortez double, and the not-so-subtle political jabs Chinese and Russian operatives.

There are times when the show slips into trying to be heartfelt and warm which helps to give it a sense of depth and humanity. Like Naird trying to help his frustrated daughter with trigonometry homework or struggling to keep his marriage going when his wife is in prison (we are never told why she’s in the clink). But this is then quickly gear-changed back to its humour mode. The series feels more like a workplace comedy but this time set in a government facility. So a bit like The Office meets Veep, but not as funny as the former and not as savage as the latter.

The cast of the series is by far it’s strongest point. Carrell leading the way, and also teaming up with John Malkovich as Dr Adrian Mallory, Naird’s civilian scientist advisor and basically second in command. Malkovich almost steals all the scenes he’s in, but having him and Carrell together elevates both of their performances. There’s also Captain Angela Ali (Tawny Newsome) and Dr Chan Kaifang (Jimmy O. Yang) who end up an unlikely pairing. Also many of the supporting characters are made up of stellar names including Fred Willard (this is his last onscreen role), Jane Lynch, Patrick Warburton, and Ben Schwartz.

At 10 episodes and with each episode at a tight 30 minute runtime, it’s fairly easy to binge through this show. It’s light fair for the majority of the season and easy to throw on for comfortable viewing. It’s certainly not groundbreaking in style and could do with a bit more direction for where it wants its characters to go. But the pairing of Carrell and Malkovich along with its supporting cast makes it easily palatable. But with a cliffhanger ending to Season One, we’ll have to see if Netflix sends a rescue shuttle for a follow up.