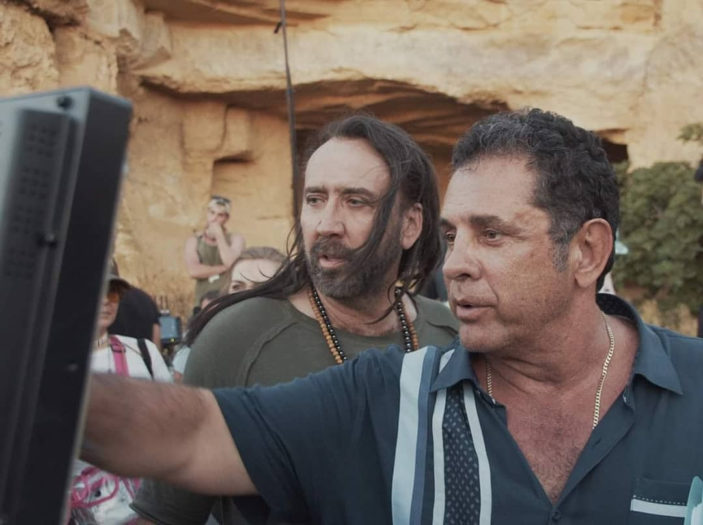 In this writer’s opinion, a new upcoming film starring Nicolas Cage is a cause for celebration. But when you have the eclectic actor starring in a film that features martial arts, aliens and ass-kicking, that sounds like a jam-packed smorgasbord of fun. And that is what the sci-fi martial arts flick Jiu Jitsu is.

We were fortunate enough to speak with the writer/director of the film, Dimitri Logothetis, as he discusses how the wild project came about and how true martial artists were essential for his film to come to life.

Seeing how this film was based on a comic book of your creation (with screenwriter Jim McGrath), what was the genesis of the idea for Jiu Jitsu?

I thought it would be a fun idea to combine science fiction and martial arts. I called my writing partner, Jim McGrath, and said why don’t we do a comic book? He thought I was crazy. However, the comic book gave me the ability to visualize the film. Once we finished the comic we went right to script.

From the numerous singular takes to the amazing POV sequence with Alain Moussi and Tony Jaa, what was it like to devise the complex action scenes in such a tight schedule? Were there moments of improvisation on set?

I was lucky to work again with Supoj Khaowwong, a terrific stunt coordinator who is Muay Thai based. We designed the action sequences a few months before shooting the film.

Supoj and I discussed the look and feel of each action sequence months in advance of shooting. Then he worked with his team to pre-viz them and cut them together, and send them to me.

There is so much martial arts talent on display in Jiu Jitsu. Being a martial artist yourself, what was it like to assemble such a talented cast? and how were they to work with?

I knew I wanted to have some true authentic martial artists in this film. For instance, Alain is a 6th degree Jiu Jitsu Master. I was lucky to get Tony Jaa who I’ve been wanting to work with for a while.

Then I got Juju Chan, and Frank Grillo. Finally, I was fortunate enough to land Nic Cage, who delivers all the heart and passion in the story.

You have worked with lead actor Moussi on various projects. What is it about him that makes him special that you want to keep working with him and does he surprise you on each collaboration?

I don’t feel that you can make a martial arts film without a true authentic martial artist as the lead. As I’ve mentioned before, Alain is a 6th degree Jiu Jitsu Master. He’s an exceptional martial artist as well as a stuntman. Alain Moussi performs all of his own action sequences himself. We both try to design new, fun, highly complicated action sequences with every project and the enthusiasm that he brings into the set is contagious.

Between Jiu Jitsu and the recent Kickboxer films, it’s clear that you love the martial arts genre. What are your genre influences in making such entertaining martial arts films?

My genre influences are, of course, Enter the Dragon; the original Kickboxer with Jean-Claude Van Damme; Bloodsport, The Karate Kid, Fists of Fury, Ip Man with Donnie Yen, Shanghai Noon with Jackie Chan, and on and on.

Having the presence of Nicolas Cage on Jiu Jitsu must have been incredible. What was it like to work with the acclaimed actor? Did he provide many improvisations on set?

I was fortunate enough to get Nic Cage; who wasn’t available at the time we were going to shoot the film. Then he became available because the project got pushed back.

Nic really embraces the genre and delivered an exceptional performance. He does it with such passion and always gives 100%. In addition to that, he trains in Jiu Jitsu so he was able to do 80% of his own stunts himself.

Considering the premise of the movie, do you have any plans or ideas for a sequel if the film is successful?

I’ve got some ideas that I’m not ready to discuss. But I’m always open for a fun sequel if the audience demands.

Any news on upcoming projects? Is the sequel to Kickboxer: Retaliation still being made?

I keep getting asked the same question. We have Kickboxer: Armageddon coming, which will be the final film in the Kickboxer Franchise. I hope we can start shooting in 2021. I have got some incredible martial artists lined up for that.

Jiu Jitsu is available now On Demand. You can read our review of the film HERE.