I Nearly Shed a Tear While Playing The Spyro Reignited Trilogy

Growing up, I played the Spyro and Crash trilogies annually. It was a family tradition that had long fallen by the wayside in the wake of jobs, university studies and adult responsibilities. When the Crash Bandicoot: N-Sane Trilogy was released, the tradition was revived, and many great hours were spent pouring over the remarkable and spectacular new visuals of the game.

Spyro Reignited Trilogy is likely to spark that tradition once more, if the demo I was privy to is anything to go by. The three levels that filled out the preview were Toasty, Tree Tops and speedway level, Sunny Flight. Strangely, all three levels came from 1998’s Spyro the Dragon, the first entry in the series.

What struck me most was how familiar the worlds felt. My history with Spyro extends far back, being one of the first games I ever played on the original PlayStation, and memories have a tendency to warp with age. When I first played Spyro, I was astounded by the colourful and beautiful visuals, and though video games could never get any better. The Spyro Reignited Trilogy has brought this feeling, and this potential to a whole new generation of gamers.

I’m so excited for the kids who get to experience this game for the first time. While it was one of the first games I ever played, it has remained a consistent and solid favourite throughout my gaming experiences. I can only hope that this generation of kids can see the fun and beauty of the Spyro series with this release.

The visuals are truly spectacular – vibrant and full of life. Little details make the game shine, such as the grass burning when Spyro uses flame breath, or the night sky twinkling with half a dozen lights.

Tree Tops looked spectacular with a brand new lighting and colour scheme, trading in its original murky browns and mustard greens for lush forest hues and a sky filled with the aurora borealis. Enemies, too, have undergone a visual overhaul, with the strange, hulking blob creatures reimagined as gorillas and apes. 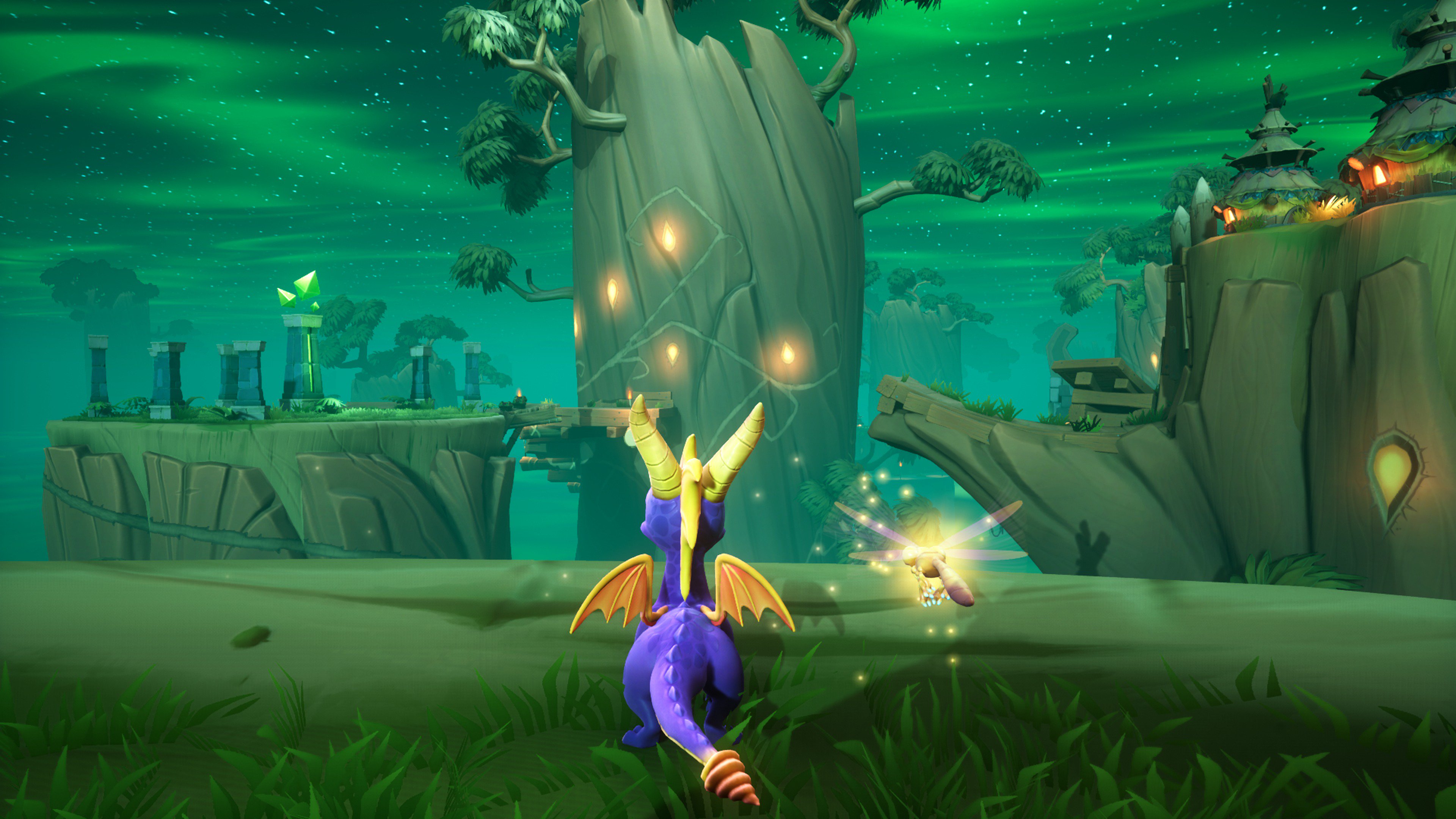 All the same shortcuts, secrets and tricks are there as you remember them (even if I momentarily forgot the three-speedway supercharge secret for freeing the final dragon), with an extra layer of style. The dragons have undergone the most surprising changes, with each now having their own style and unique personality. Unfortunately, some of them seem rather cartoony and exaggerated, in opposition to their original, sterner counterparts. That said, not all change is bad, and it was fun to see these dragons reinterpreted as they were.

The one bugbear that may rear its head for long-time fans of the franchise is the control scheme. This was an issue that plagued the Crash Bandicoot remaster, largely because the control scheme from Crash Bandicoot 3: Warped was ported over to the earlier titles, rendering certain jumps nearly impossible. Thankfully, the controls of Spyro feel unchanged, despite someone differing visual cues. It took me only a moment to adjust to the updated and more stable camera and controls. This adjustment came in handy for my final challenge – taking on the Sunny Flight speedway.

Speedways feature regularly throughout the Spyro franchise, and follow the same basic rule – you must destroy all the objects in a set amount of time without touching the ground. Sunny Flight is fast, and made faster by the updated visuals and controls.

Making a single mistake means wasting precious seconds and delaying your eventual victory. Despite having played a version of the level nearly a dozen times, I still had difficulty completing it. The third time was the charm, after memorising the best order for completion. For reference – tackling the trains first, then the chests, followed by the portals and then the planes will set you on the right path.

The preview of the Spyro Reignited Trilogy was far shorter than I expected, but it left me giddily excited for the final product. Everything I played was tight, gorgeous and ridiculously fun. If these levels are anything to go by, this game will be a triumphant and celebrated return for a much-loved character.

Spyro Reignited Trilogy is releasing worldwide on 21st September for PlayStation 4 and Xbox One. It is currently available to pre-order online, or from your local games retailer.