Film Review: The Quiet Girl is a low-key gem that proves the smallest gestures can warm the biggest hearts 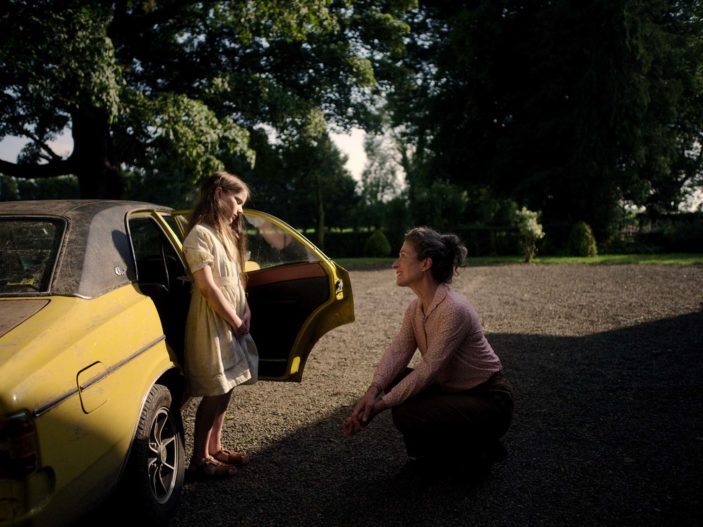 Set in 1980’s Ireland, The Quiet Girl tells the story of Cait (Catherine Clinch), an emotionally and socially withdrawn child who lives with her destitute family in a rural village. The family is vast with many siblings and are struggling financially, leaving Cait feeling neglected and forgotten. When her mother becomes pregnant again, Cait’s parents decide that it is best for the family to send Cait to live with Eibhlin (Carrie Crowley) and Sean Cinnsealach (Andrew Bennett), a married couple who will serve as foster parents for Cait.

Eibhlin gets along with Cait by showing love, affection and teaching her how to do her daily chores. Sean, on the other hand, keeps to himself and gives Cait the cold shoulder. Over time, the two eventually come out of their shells and Cait begins to grow and blossom. But a dark family secret hidden within may put their relationship to the test.

The Quiet Girl (An Cailin Ciuin) is the directorial debut of Colm Bairead, who is best known for his short films and documentaries that highlight Ireland of either its beauty, political context or social context. For his narrative feature, Bairead manages to marry the three layers into a motion picture that is visually wondrous in its splendour, emotionally dense in its humanity and assured in its sparse storytelling.

Without spoiling much of the plot, a lot can be said for how wonderful the film is from the very opening shot. The film opens in 4:3 Academy ratio to a vast field that is aurally occupied with the sounds of nature (gusts of wind and birds chirping) and followed by the calls of Cait’s siblings, as she lies in her quiet solitude. That shot alone (lensed by Kate McCullough, whose on-screen work is both incandescent in its staging and pensive with its blocking) provides the perfect introduction into the psyche of Cait – a young girl whose silence speaks loudly as a yearning of escape and a longing for reciprocation through love.

The cinematography also does a wonderful job in utilizing the aspect ratio in making the world that Cait explores feel extremely vast – a whole new world that is open for exploration as well as highlighting how Cait feels about herself in feeling insignificant. However, the settings of the quaint housing, the plentiful greens in the mystical forest, the darkness in the family home that often shrouds over Cait and the luminous portrayal of water that Cait gathers alongside Sean as part of the chores; all of it lends the film a fantastical fairy-tale-like quality that conveys the mindset of Cait as she sinks into and eventually grows accustomed to the surroundings.

The film also proves that even the smallest victories and gestures in life can prove to be effective in making an impact that can last a lifetime. Whether it is running down a path in a forest to gather the mail or something as simple as offering a biscuit; actions speak louder than words here and Bairead and the cast make the most out of the emotionally covert approach to the film’s storytelling.

Crowley exudes remarkable warmth as the nurturing Eibhlin while Cinnsealach is compellingly subdued as the taciturn Sean. But the standout is Clinch as the titular character, Cait. A lot of her performance is reliant on her eyes and her physicality through movement. Whether she is enclosed as if she is self-institutionalized inside her head or running with utmost glee (in a great scene involving Cait running through the forest, gathering the mail) or navigating cautiously through new settings and people with her eyes, Clinch lends remarkable weight to the role and makes the film take flight with her emotional honesty.

Overall, The Quiet Girl is a low-key gem of a film that is powerful on its restraint, heart-warming in its character depictions and wondrous in its presentation. Films with the smallest victories can have the biggest hearts and The Quiet Girl is one of those films that will stay with you long after the end credits roll. Highly recommended.

The Quiet Girl is now showing in selected cinemas, courtesy of Madman Films.