Film Review: Venom (USA, 2018) is a wasted opportunity at a more irreverent antihero 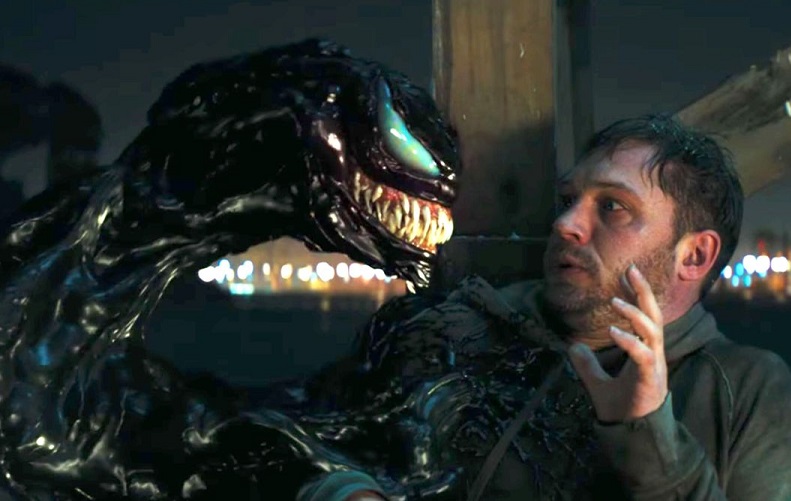 I’m going to preface this review by saying, I’m not a comics person, I just enjoy comic-adaptation movies. So my reviews tend to have this film-centric lens rather than delving into how aspects of specific comic editions or stories can be seen threaded through the movie. So now that I’ve gotten that out of the way, let’s take a look at the latest comic adaptation to spew forth on to the big screen, the Sony-in-conjunction-with-Marvel film Venom.

When investigative reporter Eddie Brock (Tom Hardy) gets a little too investigate-y with The Life Foundation and its big boss Dr Carlton Drake (Riz Ahmed) it costs him his job, and his wife Anne Weying (Michelle Williams) and he’s turfed out, deservedly so, on his butt. So when Dr Dora Skirth (Jenny Slate) ends up confirming Brock’s suspicions about the shady shenanigans and assists him with sneaking in to the facility, he comes face to face with Drake’s experiments. It’s here he happens to get infected by an alien symbiote parasite who calls himself Venom, and after a brief adjustment period it’s up to Brock and Venom to stop Drake.

The screenplay by Scott Rosenberg, Jeff Pinkner, Kelly Marcel and Will Beal feels like a stock-standard origin-story that struggles to make any real impact or provide any sense of urgent stakes. The film goes from 0 to 100 in what feels like an almost whiplash inducing sharp right turn about an hour in. It starts off as a very distinct, let us show you the ways in which Eddie Brock is a good guy but a bit of a deadbeat. Despite having a fairly successful journalism career, he goes and screws it up by exploiting his wife’s connections and thus takes a one way ticket to Loserville. So when Venom (voiced by Hardy also) shows up, it’s a pretty abrupt nosedive into a whole other tone as it goes from serious to silly self-awareness. And frustratingly the film never seems to lay any ground rules or in-universe logic down so there are some gapingly wide plot holes.

Hardy is a brilliant actor when given a chance to portray somebody with depth. Here however he gets an opportunity to ham it up instead, and the best parts of the film are when he’s having to field conversations with a secondary character who isn’t there. Suffice to say that the character of Venom is wickedly funny with his perpetual need for food (preferably still living, preferably human heads), his insanely long tongue, and a surreal curiosity for trying to fix Brock’s relationship. It’s almost Hardy playing against Hardy, and if you want more of that watch the criminally underappreciated 2015 film Legend where he plays twins. So it’s somewhat a shame that it takes a while for us to get to this point.

The rest of the cast are just going through the motions or are written with so little backstory or development that we barely care for their trajectories. Williams is fairly bland, and despite her character dumping Brock, she’s also the first to try and get him out of trouble. Once again we’re treated to a fairly cookie-cutter female significant other.  Ahmed weirdly switches between religious or environmentalist zealot to evil scientist but never truly comes across as sinister or threatening, or dangerous. Skirth and other briefly onscreen character Dr Dan Lewis (Reid Scott) are both likable but not around enough for us to care more.

Sony’s decision to go with a PG rating to try and keep it open to possible Spiderman crossovers and to tap into a younger audience market was (probably) a detrimental move. The potential for more humour, more irreverence, more violence, more craziness, was there for the picking but only for it to be dashed. Director Ruben Fleischer has crafted an origin story that isn’t entirely faithful to the comics, but also doesn’t have enough guts to stand on its own as a unique or interesting take. At times the CGI is just horrifically messy and difficult to watch. Almost all of the exciting action set pieces are in the trailer so no exciting surprises there. But one up side is the sound design work that in a large cinema setting, we get Venom’s voice emanating from various corners of the room.

Venom had the potential to embrace its own silliness and be another darkly humorous take on a comic book antihero a la Deadpool. But the film begins as a boring origin story mess and feverishly tries to make up for it in its second half. If you lower your expectations down enough to go in to watch something a bit silly and stupid you’ll probably be a bit entertained. But the wasted potential that can be seen lingering in those funnier moments leaves you with a frustrated bitter aftertaste.

PSA: There are two credit stingers, a mid and an end credit, so be sure to stick around.

Venom is out in Australian cinemas from today through Sony Pictures