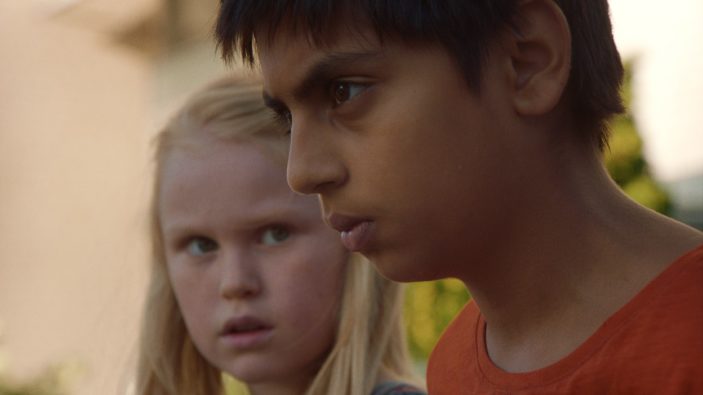 Set in present day Norway, The Innocents follows the story of Ida (Rakel Lenora Flottum), a young 9-year old girl who is angry with the state that she is in. Her family has moved into an apartment complex with new surroundings and she can no longer play with her older sister Anna (Alva Brunsmo Ramstad), who has reached into a regressive state of autism that makes her no longer able to speak.

While her parents (ably played by Ellen Dorrit Pedersen and Morten Svartveit) focus on Anna, Ida travels around the complex to find other kids to play with and finds Ben (Sam Ashraf), a withdrawn child who has powers of telekinesis; and Aisha (Mina Yasmin Bremseth Asheim), who can read minds and listen to people’s thoughts. Eventually, the four intrepid youths eventually get along smoothly. But the simmering anger within them begins to show and it heats up to a boiling point that will change their lives forever.

The Innocents is the latest film from writer/director Eskin Vogt. Best known for his writing collaborations with filmmaker Joachim Trier including 2021’s The Worst Person in the World and 2017’s Thelma, Vogt is back in the director’s chair once again with a truly chilling piece of work. The ideas behind the film revolve around pedophobia (the fear of children) that are situated around the emotional intelligence of children, or lack thereof. Because of their living situations which involve lack of empathy/understanding from their guardians, physical/emotional abuse, dealing with foreign surroundings and facing fears; our leads are lured by their sense of adventure and the unknown and they irrationally lash out in ways that are confronting, shocking and believable.

Nothing in the film gets sugar-coated or contrived to spare the audience of its existential dread. Scenes involving broken glass inflicted on loved ones, animal abuse and child-parent violence are appropriately provocative and yet are grounded thanks to the concrete characterizations in Vogt’s screenwriting that avoids veering into exploitation. We get enough background from the characters to form a sense of empathy and even sympathy for these children and the child performances are compelling enough to be both genuine and terrifying. Flottum is an absolute natural on-camera, Ashraf is compellingly angsty, Asheim is amusingly wide-eyed and thoughtful and Ramstad deftly avoids histrionics in her portrayal of neurodiversity.

On the technical front, the immersive sound design by Gisle Tveito and Gustaf Berger is wonderfully vivid as it adds substantial credence to the power of suggestion; making the scenes of violence stand out. The cinematography by Sturia Brandth Grovlen manages to capture the mindsets of the children by opting with close-ups that makes the characters feel enclosed with their emotions; as well as wide shots that peculiarly make the settings feel vast. There is an eerie circular logic that makes the environments feel similar to limbo; a never-ending sense of repetition and ennui that threatens to push the children to their breaking point and that is credit to Grovlen’s lensing and Vogt’s direction.

Overall, The Innocents is a haunting film that marries both tried-and-true genre tropes and striking artistic expressionism successfully with identifiable emotions, solid storytelling ideas and remarkable directorial prowess. It is the one horror film in 2022 that you do not want to miss.

The Innocents is showing in Australian and NZ cinemas now, courtesy of Rialto Distribution.