Film Review: The Hustle (US, 2019) is a swindle with very little payoff 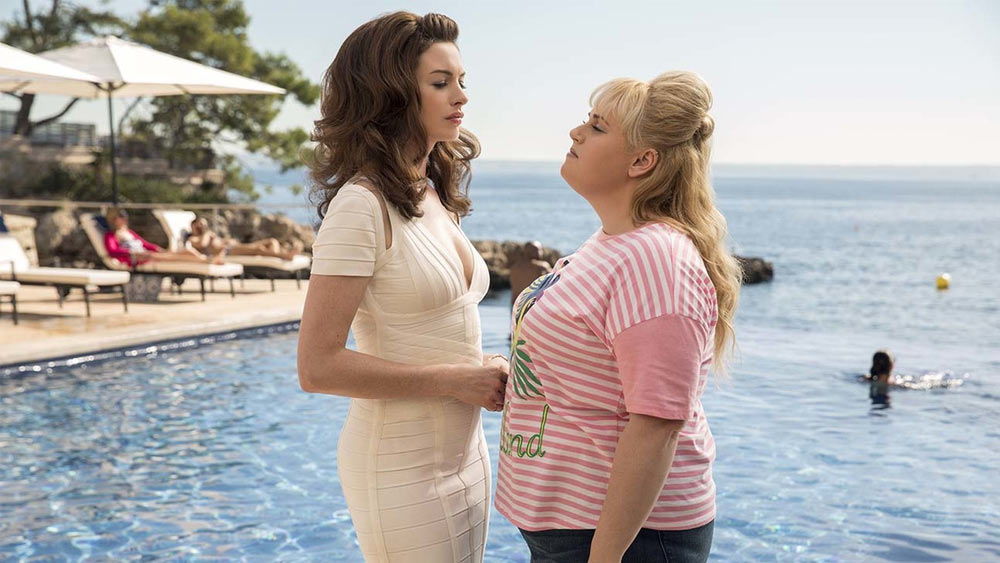 After several release date pushbacks and a title change (its working title was Nasty Women, a now outdated reference to one of Donald Trump’s many insults thrown at Hillary Clinton), The Hustle finally plods into cinemas this week. A female-centric remake of 1988’s Dirty Rotten Scoundrels (which was itself a remake of 1964’s Bedtime Story), the film attempts to flip the script and allow the women to take the spotlight as the shrewd con women in charge.

While there is great chemistry between the two leads, Rebel Wilson and Anne Hathaway, and the occasional moments of hilarious mismatched absurdity and physical humour, the overall product is a relatively disappointing affair. With a neverending series of gags that mostly fall on their face and a muddled screenplay that can’t quite pinpoint its true intention, The Hustle is a swindle with very little payoff.

In a New York City bar, we meet crass, “low-rent” Australian con woman Penny (Wilson), as she attempts to elicit a few hundred bucks from a lovesick target (a brief cameo from Veep‘s Timothy Simons) she’s been catfishing online. When the police bust in, Penny grabs the cash and escapes to France, with her sights firmly set on scamming Europe’s richest men.

While aboard a train to the French Riviera and working her routine on an unsuspecting Frenchman, Penny catches the eye of Josephine (Hathaway), a posh, high-class British con artist who doesn’t take kindly to another hustler cutting in on her turf. When the pair arrive in Josephine’s dazzling hometown of Beaumont Sur Mer, Josephine pretends to be impressed by Penny’s skills (keeping her true identity a secret, of course) and points her in the direction of the local casino where the town’s wealthy men are just waiting to be conned.

With the help of local policewoman Inspector Desjardins (Ingrid Oliver), who is really under Josephine’s employ, the con goes pear-shaped, which Josephine uses as a ruse to get Penny out of the country. But the Aussie swindler proves to be sharper than she looks, almost immediately returning on Josephine’s doorstep and demanding to be taught the ways of hustling like a boss or she’ll dob her con artist counterpart in.

And, thus, an unexpected con woman partnership is formed, as the pair join forces to elicit jewels and dollars from anyone dumb enough to fall for their wicked schemes, particularly internet whizkid Thomas (Alex Sharp), who becomes the unwitting target of a bet between the two ladies. But with each con woman with her own particular goal in mind, just who is playing who?

Wilson offers up yet another performance that plays on her penchant for self-depreciation and goofy physical comedy, centred squarely on her plus-size stature. She does this schtick well, even if it is growing somewhat tiresome by now. You know exactly what to expect when a film casts her in such a role and there’s nothing new to see here that we haven’t seen before. Penny is unrefined and crude. Her fashion sense is garish and uncouth. She’s meant to shock and offend an audience. It’s essentially the adventures of Pitch Perfect‘s Fat Amy after she left her acapella days behind. It’s a fine performance, if not entirely expected and safe.

Standing as the crux of the comedy of The Hustle, Hathaway is the complete contrasting antithesis to her co-star, providing the cliché mismatched humour expected of such a film. In an array of glamorous costumes, Hathaway consistently looks regal and stunning, exuding elegance at every turn. It’s just a shame her character isn’t given much else to do but just look great. We’ve seen Hathaway’s gift for comedic timing elsewhere, notably her scene-stealing turn in last year’s Ocean’s Eight. Sadly, the material just isn’t here for Hathaway to sink her teeth into. But when she is called on to play a series of wildly different characters during each con, Hathaway finally shines, particularly as a doe-eyed idiot American socialite or a brutish Hungarian psychologist with outlandish therapy techniques.

Hathaway’s gaudy British accent sounds more like a woeful Julie Andrews impersonation (who Penny even references, at one point), which isn’t surprising, given Hathaway has struggled with the British twang in the past. Anyone remember 2011’s One Day? Now, here’s the thing. In press interviews, Hathaway has been touting this accent as being purposely woeful to lead audiences to believe Josephine is not actually British and it’s just another element of her con artist routine.

Seems like a great artistic choice, similar to what Amy Adams offered up in American Hustle. The big difference here is Adams’ character’s cover is blown and the audience does indeed learn she’s not British. That does not happen here. If this was indeed a purposeful choice on Hathaway’s behalf, a word to the screenwriter to add in a “big reveal” moment to the script wouldn’t have gone astray. It’s just one of the screenplay’s numerous issues, which reaches for bold feminist statements that are consistently muddled by the narrative’s unclear intentions.

There is the occasional glimmer of gold dotted throughout a film that proves overwhelmingly flat, despite great chemistry between Wilson and Hathaway. A gruelling (and entirely obligatory) training sequence offers Wilson the chance to showcase her slapstick comedy skills, which is one of her greatest assets. As the incongruous pair constantly bicker and quarrel, they trade vicious barbs of dialogue, like when Josephine refers to Penny as a “big-titted Russell Crowe.” Wilson’s take on the South African accent is deliciously hilarious, but it comes far too late in the film to save what’s come before.

But a bafflingly long sequence in which Penny masquerades as Josephine’s mentally ill sister, who believes she’s actually a Victorian-era princess, is decidedly unfunny and woefully stupid. For every joke that lands, there are simply too many that don’t. A playful and lively French-inspired score from Anne Dudley and some gorgeous production design from Nigel Phelps are not enough to save this uninspired comedy from itself. By the time The Hustle reaches its silly (and pointless sequel-bait) conclusion, you may feel like the one who’s been duped.

The Hustle is in cinemas now.