Film Review: The House With A Clock In Its Walls (USA, 2018) Ticks With Magic; Tocks With Horror 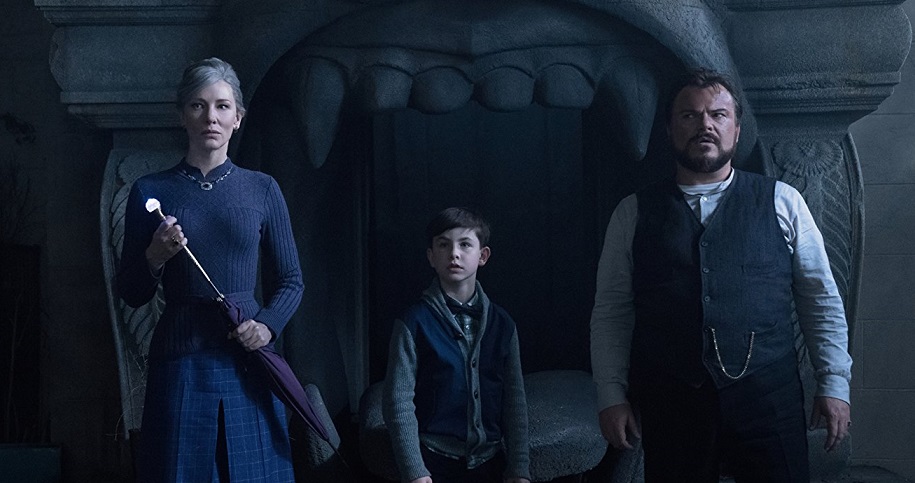 When you mix up Harry Potter with Goosebumps you end up with The House With A Clock In Its Walls. A film that combines magic with a haunted house and the tried and true need for our young hero to find his courage and rise up to save the day.

When orphaned 10 year old Lewis Barnavelt (Owen Vaccaro) is sent to go live with his quirky Uncle Jonathan Barnavelt (Jack Black) he discovers that not everything is quite what it seems. The house Jonathan lives in is magical, he’s a warlock, his next door neighbour and best friend Mrs Florence Zimmerman (Cate Blanchett) is a witch, and something dark and sinister is coming. To add to Lewis’ troubles, trying to fit in at school is so much harder when you’re a bit weird and living in the infamous house on the street.

Make no mistake, The House With A Clock In Its Walls is a film that is definitely squarely aimed at families, and pre-teens. But also be warned, that when you’ve got director Eli Roth (Death Wish, Hostel) and a screenplay by Eric Kripke (tv series Supernatural) that this film is going to be anything but rainbows, fluffy bunnies and sunshine. This film is dark, albeit Roth has opted to tone his usual flair down to suit the PG-13 rating. But thematically it touches on a lot of those dark things, such as loneliness, death, being an outsider, being bullied and world domination via the complete elimination of the human race.

Based off the children’s book of the same name by author John Bellairs, the storyline teeters between two subplots that only briefly intersect. There’s an incessant ticking going on in Uncle Jonathan’s magic house, which he is desperate to uncover. Turns out it’s a Doomsday Clock built by his former best friend now turned evil warlock Isaac Izard (Kyle McLachlan). Whilst Lewis is now living in a new town, he’s trying to make friends, but his bug-eyed goggles, and social ineptitude makes it almost impossible. Somehow he falls in with fake-nice-but-actual-bully Tarby Corrigan (Sunny Suljic), the consequences of which become the crux of Lewis’s self discovery.

Black is pretty much hamming it up as we know him to do, swanning about in in a kimono, eating choc chip cookies for dinner and playing terrible Jazz music at 3am. But the true gift is the universal treasure that is Cate Blanchett, who adds a streak of sass and snark to her constant jibes towards her best friend. The banter and interplay between Black and Blanchett is both hilarious and adorable as they trade insults. And isn’t that the truest sign of friendship, when you can call each other such names? Faring less well is the young lead Vaccaro, who spends far too much of the film cowering, screaming or ugly crying and there are only fleeting moments where we get see his charm or “indomitable” nature. He’s supposed to be relatable and endearing because of his awkwardness. But that only serves to remind us that he’s a weirdo amongst other weirdos which doesn’t make him unique.

Visually the film prefers to utilise the more humble earthy approach of real sets, props, and a Baroque 1950’s aesthetic rather than excessive CGI. It’s not quite as flashy but it still gets the job done. The highlight of course being a bunch of old dolls, puppets and toys that definitely earn their creep factor. Much of which can be attributed to cinematographer Rogier Stoffer’s keen framing and eye.

The House With A Clock In Its Walls mixes up fantasy, magic, coming of age with horror, and paranormal. And whilst the story does have a tendency to fumble due to mixing its subplots rather loosely together. Pre-teens and young adults will enjoy getting to see a movie that is actually a bit dark, rather than covered in sugar-coating.

The House With A Clock In Its Walls is released in Australian cinemas today through Entertainment One.