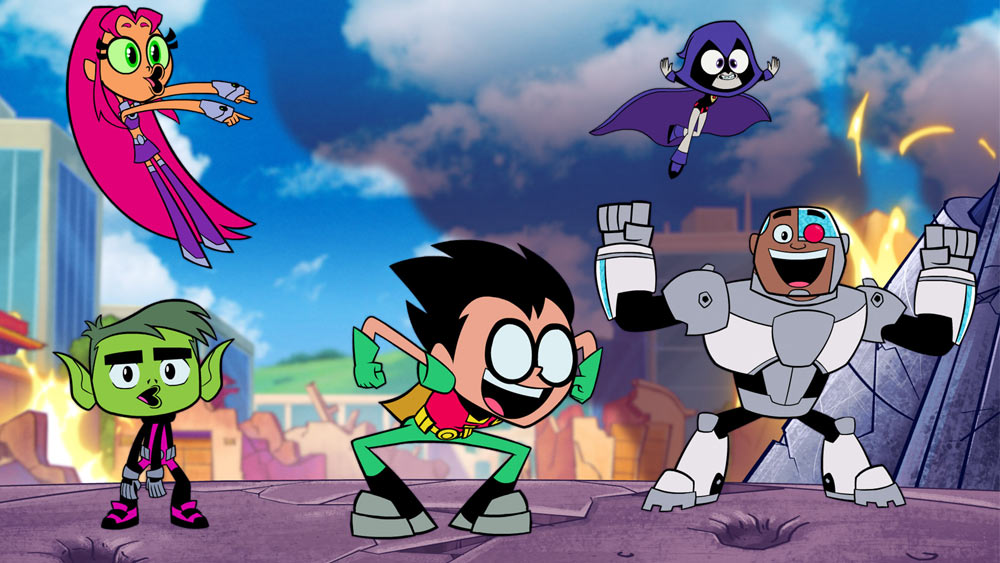 There are children’s animated movies made exclusively for kids, which generally lead to a rather torturous experience for parents and caretakers alike (I’m looking at you, Hotel Transylvania 3). Then there is something deceptively ingenious and utterly delightful as Teen Titans GO! To the Movies, which successfully entertains both young and old, whilst also offering up a comic book fanboy’s joyous dream. With its tongue firmly planted in its cheek, Teen Titans GO! To the Movies is DC’s self-deprecating, meta-aware, kid-friendly Deadpool equivalent. It’s also exactly the breath of fresh levity that this cinematic universe desperately needs right now.

While it may not technically exist within the same realm of those other live-action superhero franchises, the film takes a sharp poker to the never-ending wave of superhero films DC and Marvel have dished up over the last ten years. Barely anything escapes a good skewering here, with directors Peter Rida Michail and Aaron Horvath and screenwriters Michael Jelenic and Horvath crafting wave after wave of delicious satirical fun. From the infamously awful “Martha!” scene in Batman v Superman to the soul-crushing disaster that was Green Lantern (“There was a Green Lantern movie…but…we don’t…we don’t talk about that.”), everything is fair game. The result is one of the year’s most refreshing surprise packages. Can you tell I loved this film?

Based on the enormously popular Cartoon Network series, Teen Titans GO! To the Movies is, unsurprisingly, concerned with the Jump City (a town that boasts its “safer than Gotham”) misadventures of our titular superhero gang, comprised of Batman’s beleaguered sidekick Robin (Scott Menville), impassive goth-girl Raven (Tara Strong), brawny half-cybernetic half-man Cyborg (Khary Payton), perennial jester Beast Boy (Greg Cipes), and the perpetually positive Starfire (Hyden Walch). Despite considering themselves on-par with that other DC supergroup, the Justice League, the Teen Titans aren’t taken particularly seriously by their fellow superheroes, thanks to their lack of a big-screen adaptation like so many other heroes.

That message truly hits home when the gang are embarrassingly rejected from the lavish Hollywood premiere of the latest Batman film (hilariously titled Batman Again), despite seemingly every other obscure DC character being welcomed onto the red carpet. After using Raven’s portal power to sneak inside the cinema, Robin embarrasses himself by wrongly assuming a preview trailer will finally announce his silver screen debut (I won’t spoil what the trailer is actually for but it’s rather hysterical). Feeling defeated, he’s forced to admit the Titans are being ignored by the superhero movie phenomenon sweeping Hollywood.

After a pep talk from his fellow team members, Robin becomes determined to convince Hollywood’s hottest superhero film director, Jade Wilson (Kristen Bell), that he and the Titans are indeed deserving of a blockbuster film adventure of their own. There’s just one small problem – every epic superhero needs an equally-epic arch-nemesis. Batman has Joker. Superman has Lex Luthor. The Flash has…uh…Rainbow Raider. As fate would have it, the Titans are handed the perfect opportunity to gain their much-needed adversary, and Robin’s chance at stardom, when the villainous Slade (Will Arnett) arrives in Jump City to create all sorts of havoc.

What follows is a hysterically funny and infectiously entertaining piece of cinema, overflowing with pop culture references and hidden easter eggs for keen-eyed fanboys. While the film is naturally aimed squarely at the children’s demographic, the bulk of its biting humour will likely sail right over the heads of younger viewers, and instead intentionally land with those generations more familiar with these characters and franchises. When a film references “Gene Hackman’s real estate scheme,” the Warner Bros. lot being referred to as “where the Animaniacs live” and the iconic Back to the Future score playing over a time-travelling sequence (the film’s comedic highpoint), we’re clearly in older fanboy territory.

Even something as subtle as Nicholas Cage being the voice behind Superman is a delicious meta piece of casting, given that superfan Cage infamously lost his chance to play the icon, after Tim Burton’s planned audacious production of Superman Lives, starring Cage as Kal-El, was unceremoniously scrapped in the late 1990’s. Twenty years later, and Cage is finally (somewhat) given the role he’s always wanted to play. It’s this acute sensibility and awareness of the pop culture world within the film’s screenplay that creates such a dazzling delight for those deeply familiar with decades of comic book and cinematic lore.

That’s not to suggest one essentially needs to be a comic book and/or Hollywood historian to understand and enjoy Teen Titans GO! To the Movies. Far from it. Whilst the film naturally works on another level for those who pride themselves on pop culture knowledge, there’s still plenty here for those outside that bubble, especially the young ones this film is really intended for. There are still plenty of goofy jokes and sequences (a brilliant The Lion King parody is a particular highlight) crafted exclusively for the kids in the audience. Poop jokes and silly dance sequences abound, eliciting uproarious laughter from the children attending my screening. And any adult who can’t give in and laugh along with them at an extended fart gag needs to severely lighten up.

As with most kid’s films, there’s a concerted effort to provide a deeper moral message amongst the silliness. While it may not reach the lofty heights of Pixar’s trademark teachable moments, the film ultimately wants children to remember you don’t have to be a superhero, just be yourself. It’s a charming and endearing mantra, but it’s probably unlikely to mean much to the superhero-idolising youth of today. The production may not have the visual gravitas of Pixar’s 3D wonderlands, but we’re in rare 2D territory here, and the animation is every bit as dazzling and colourful as its 3D counterparts. Its musical perceptiveness is also wildly impressive; particularly the hilariously camp number “Upbeat Inspirational Song About Life,” delivered by Michael Bolton, of all people.

It’s no exaggeration to say the world is in a state of superhero genre fatigue, with no signs of Hollywood slowing down production anytime soon. Teen Titans GO! To the Movies sharply satirises this current cinematic climate, while also providing the DC franchise with the refreshing antidote it’s so achingly in need of. Marvel took this path with the irreverent comedy of Deadpool and Ant-Man. At long last, DC has something to match those cheeky examples, and their entire universe suddenly seems that much fresher for it. Whether this influences future DC projects remains to be seen. Lord knows they could all use a dose of this film’s fun right now.

From start to finish, Teen Titans GO! To the Movies rightly refuses to take itself seriously, ultimately delivering one of the most joyous experiences of the year. It lambastes the entire Hollywood studio system and its exhausting obsession with superhero films. It cranks the satire and parody to pitch-perfect levels, thanks to one of the sharpest screenplays this year. And, most importantly, it’s wildly entertaining and boisterously hilarious. Kids will find it a hoot, but you’ll probably love it just that little bit more. Who would have thought?

Teen Titans GO! To the Movies is in cinemas September 13.