Film Review: Sonic the Hedgehog 2 is a fast, zippy and frothy sequel that runs circles around videogame film adaptations 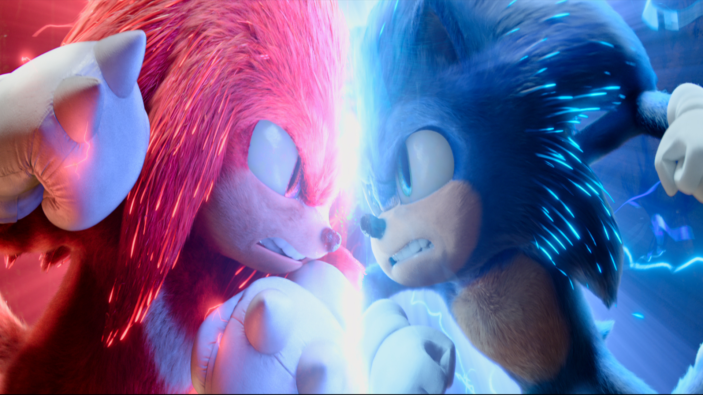 Sonic the Hedgehog 2 picks up after the events of the first film as the titular character (voiced by Ben Schwartz) has taken the mantle of being the hero for the people in the town of Green Hills. But his recklessness and overeager bravado has consequences as he wreaks unintentional havoc while trying to do the right thing. His family including Tom and Maddie Wachowski (James Marsden and Tika Sumpter) are loving, nurturing and give life lessons to Sonic about waiting for the opportune moment for his heroic destiny.

Meanwhile, evil villain Dr. Robotnik (Jim Carrey) has returned into the fray but with a new compatriot by the name of Knuckles (voiced by Idris Elba), a red echidna who bears a long-lasting grudge toward Sonic. Their plan is to gather a certain artefact that can allow Robotnik into a path of awesome power. With Tails (Colleen O’Shaughnessey, reprising the role after numerous appearances) as an unlikely ally and long-time fan by his side, Sonic is facing his biggest challenge yet.

The first film was a financial success and had garnered better than expected reviews due to the negative reception of videogame film adaptations, which is saying a lot considering the bad buzz it got due to the bad reception of the titular character in the trailers that led to the special FX department into damage control. As for the continuation, the film follows the formula expected of sequels to a T: aiming to be bigger-er, better-er and longer-er [sic] in scope, action and budget.

While the film is certainly bigger-er and longer-er; better-er is not the best term to describe the sequel. In terms of positives, the new characters in the film truly make their mark and provide a lot of fun to the proceedings. Tails provides a good foil and temperament to the enthusiasm and hijinks of Sonic while Knuckles adds a weight of menace and weight to the story; making the pathos and drama more felt than it otherwise could have been. Fans of the videogame will be delighted by the faithfulness of the depictions of the characters as the film does not dumb down their backstories as well as their motivations i.e. the sternness of Knuckles and his hatred toward Sonic.

The action is more inventive as it involves compelling obstacles that Sonic has to face which relies on more than just his super-speed to solve the problems i.e. a set-piece involving an avalanche and saving a potential casualty. The film also thankfully relies less on the slow-motion style that had reached its peak in repetition in the first film. In addition, the performances from the cast are more confident and assured this time around; even with the variable screen-time from all involved.

The nominal human roles by Marsden and Sumpter are good while Carrey is still a pantomime hoot as Robotnik as he chews the scenery as if it was his very last meal. His impression of a rabid dog will have you gasping for air after undergoing fits of laughter. Having additional screen-time for both Lee Majdoub and Natasha Rothwell (as Agent Stone and Maddie respectively) was a wise decision as both tackle the humour with aplomb.

As for the film’s negatives, the storytelling lacks focus as it diverts to subplots and comedic set-pieces that add nothing to the story i.e. Maddie’s wedding and a dance-off. With a bloated runtime of 120 minutes, those scenes, while enjoyable on their own terms, could have been cut out entirely to make the pacing more effective and it would have no effect on the plot whatsoever.

Overall, Sonic the Hedgehog 2 is an entertaining, frothy sequel that provides requisite entertainment for the masses as well as fans of the videogame. The film may be lighter than air and it will race out of one’s mind as soon as one leaves the theatre but it provides sufficient amounts of fun while it lasts and it is miles ahead of other videogame film adaptations.