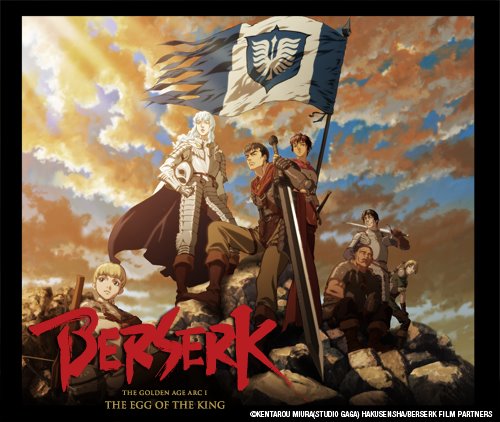 Set in a European style medieval world, the story revolves around a brutal and unrivalled mercenary, colourfully named Guts, and his quest to become ‘The Black Swordsman’. His ferocity, cockiness and reckless disregard prove appealing to Griffith, highly skilled leader of ‘The Band of the Hawk’ mercenaries, who enlists him, against the wishes of fiery second in command Casca.

The Midlands Army, whom had initially hired the unstoppable band of mercenaries, are slightly fearful and angered when Griffith’s undeterred ambition, combined with his possession of the Crimson Behelit (the king’s egg) see his rise in rank from commoner to nobility. Griffith’s unquenchable desires and risky behaviour becomes more apparent, as he sets his sights on the king’s daughter. Casca and Guts start to question Griffith’s motives, when they are left to deal with the consequences of his actions.

Having not read the series of books, it’s difficult to comment on whether this first attempt at animating the epic adventure series has been accurate enough for fans of the manga. However, for those who have just been introduced to the series, it is fair to say there is no pre requisite to have read the books, in order to grasp the storylines and characters of this film.

For those who enjoy high violence and excessive amounts of bloodshed, this will be an entertaining film to watch. However, there are some elements that may be hard to stomach, including the rather graphic accidental murder of a child. There is also a strong sense of male prowess, pride and the need to dominate others, including the female characters in this film, which would have been common to the era it’s set in.

‘The Egg of the King’ is a rather adult film which brings up mixed feelings; it deals with the complex nature of relationships and comments on manipulation, jealousy, humiliation and vengeance. The characters come across strong and are not as black and white as they initially appear. The blunt and gritty style of animation does well to suit the horror and fantasy elements of the story and is not for the faint of heart. Being the first part of a series the story line is set-up well, only hinting at things to come.