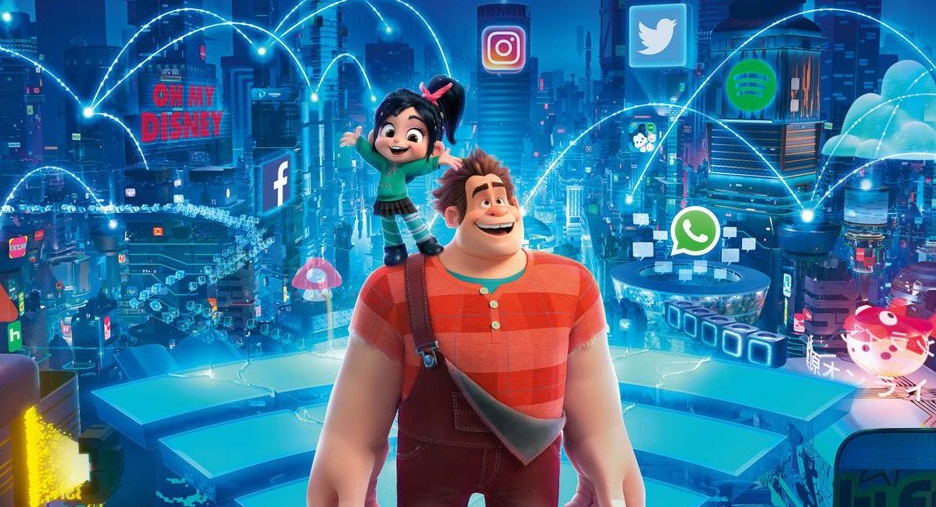 When 2012’s Wreck-It Ralph was released it conceptually took video game nostalgia and the joy of arcade games and brought that idea to life. This time in Ralph Breaks The Internet (aka Wreck-It Ralph 2) the sequel ups the ante by taking our two main characters from their comfortable video game realm into the much larger and wilder world wide web.

All is well at the Litwak Arcade, Vanellope (Sarah Silverman) has her glitch under control and is winning races, whilst Ralph (John C. Reilly) is still smashing things up with Fix It Felix (Jack McBrayer). They play games all day, then hop over to Tapper’s for root beer and chats at night. But when the steering wheel for Vanellope’s arcade game Sugar Rush breaks and her home is threatened, it’s up to her and Ralph to try and save the game. Their only hope is to venture out to the internet and try and purchase a replacement part found on eBay. This might seem simple enough but the internet is dark and full of memes and will put Vanellope and Ralph’s friendship to the ultimate test.

Directors Phil Johnston and Rich Moore return to also produce and co-write the adventures for our intrepid gaming duo. And here the world-building goes next level as they venture out into a realised digital depiction of the internet. With towering skyscrapers to represent such behemoths as Google, Facebook, and eBay. Whilst real humans are depicted as block shaped Pop Vinyl like bobble head avatars running around from place to place. Though when Ralph and Vanellope actually venture off to specific places the film is careful to not tread on toes, with them enlisting the help of KnowsMore (Alan Tudyk) a search engine with a touchy auto-complete function, and Yesss (Taraji P. Henson) the head algorithm of BuzzTube, a Youtube, Instagram or Vine-like substitute full of addictive videos.

There’s also two distinct set pieces that really steal the movie. The first being Slaughter Race, a take on Grand Theft Auto, with Gal Gadot voicing the gang leader Shank. When Vanellope and Ralph end up here searching for loot, Vanellope finds a kindred spirit in Shank and a world full of new challenges such as a great white shark residing in the sewer system. The other can be seen in the trailer when Vanellope ends up mingling with all the Disney princesses. But this in itself is the tip of a Disney self-referential iceberg, when before her royal encounter she winds up in OhMyDisney.com and bumping into Eeyore, strolling past Iron Man and having to escape capture by some stormtroopers. It turns into its own game of spotto, as you pick the Disney references.

Where both Wreck It Ralph and Ralph Breaks The Internet get to share a similarity is in the warmth of its characters, particularly its leads. Here we have a well established bond of friendship between Ralph and Vanellope that gets tested. Vanellope is searching for something more than what can be found in her game. She finds not only a new world to explore but new friends in Shank, her crew and Slaughter Race. Whilst Ralph is content with his life in Niceland and everything contained in the arcade. The increasing tension as their ideals pull them further apart and Ralph’s own personal insecurities wreak both figurative and literal damage on their relationship becomes the antagonist of the story. There is a great lesson for kids and adults alike here, that all friendships need a chance to grow and that true friends are the ones that will always be with you even if not physically by your side. And it delivers this message poignantly without being overly saccharine or preachy.

But there are moments where this 112 minute long run time does feel a bit strained. With the approach of throwing everything at the wall and hoping most of it will stick, which I guess in itself is an analogy for the internet sometimes. Also for a film that tends to focus more on Vanellope and her journey, it does seem weird that the film’s title wasn’t a little more inclusive of her. And for those who were fans of the some of the supporting characters in the first movie, they are evidently set to the side for new characters here.

Ralph Breaks The Internet on the outside might look like a very referential film that leans into all the humour and weirdness of the internet, mainstream media and pop culture. But if you delve deeper into its heart it’s more about friendship, the highs and the lows, and how it’s important for relationships to grow and evolve. It’s a film with a big heart stuffed inside a very silly fluffy weird exterior.