Film Review: Pig is one of the best films of 2021 thanks to its gripping emotional honesty and a fantastic Nicolas Cage 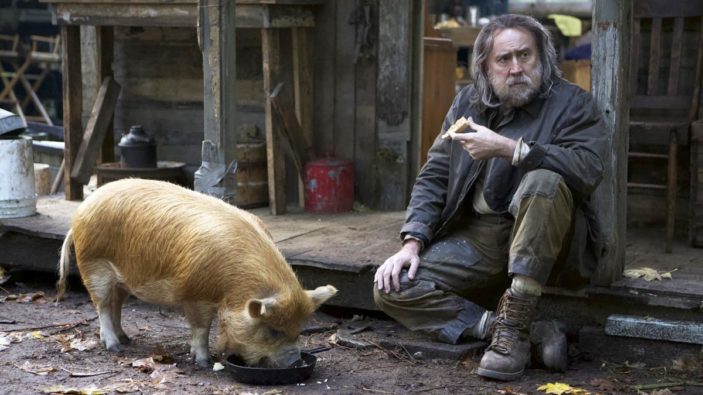 Pig tells the story of Rob (a wonderfully subtle Nicolas Cage), a former renowned chef turned truffle hunter who resides in a cabin deep in the forest who makes a living by hunting for truffles with the help of his valuable foraging pig. He sells the truffles to young supplier and friend Amir (a stellar Alex Wolff), who manages highbrow ingredients to elite restaurants. But one night, Rob gets attacked by unknown assailants and his pig gets kidnapped.

With nobody to rely on but Amir, the two go on a quest to Portland to find the pig. But on their journey, Amir gradually discovers more about Rob’s tragic past and how he relates to him more than he’ll ever realize. Will Rob find his pig? Will Rob come to terms with his past?

When trailers were released for the film, many thought that the story would be similar to that of John Wick where the lead character was also the target; leading to brutal consequences. Others also had expected something akin to the modus operandi of Nicolas Cage – acting all the way to the top. But the directorial debut from co-writer/director Michael Sarnoski aims for something far deeper and more introspective; which has not only added a true gem to Cage’s filmography but is also one of the best films of 2021.

Sarnoski (alongside co-writer/producer Vanessa Block) bides his time with his storytelling; trying to get the audience into the mindset of Rob as he saunters and lulls through his life in a place of supposed contentment. While that may sound pretentious or have arthouse tendencies that audiences may not respond to, Sarnoski manages to immerse the audience with pensive pacing and the minimal use of a musical score.

From there, he starts to gradually peel the layers of the story as well as the characterization of Rob, leading the audience (and Amir, being the audience surrogate) into strange detours that are unexpected; considering that all we know is that Rob used to be a chef. One scene involves Rob and Amir going through a secret compartment leading to a club that involves fighting and self-harm. Without spoilers, the conditions of the character of Rob are conveyed brilliantly in this sequence as it reflects the self-institution of mental harm that Rob places upon himself as he struggles to come to terms with his past.

In another brilliant sequence, we see Rob and Amir visit head chef/owner Finway (David Knell) of a restaurant who used to work under the former. During a long conversation, Rob essentially deconstructs (much like the selections in the menu) the chef down to his bare essentials in a way that is seen as brutally honest and downright inspiring. The scene is amazing in its examination of how one’s spirit can be closed in when their dreams are locked away and both Cage and especially Knell are fantastic in their portrayals of raw human emotion.

The film is not about revenge nor is it about the reclamation of past glories, but an examination of grief and how it can also close one’s spirit. But the film does not treat it as a singular mental threat but it can also affect others. A case in point is the character of Darius, which is played with a mix of stone-faced gravitas and vulnerability by Adam Arkin. At first, it appears that he is the antagonist of the piece but again, once the layers are peeled, we too as an audience discover that one’s broiling emotions cannot be contained and it can harm others, even when one has no clue of doing it. It is only when one comes to terms with their grief that something can be done, and Sarnkoski portrays that to a crescendo that is both nuanced and satisfying.

With brilliant performances, assured direction and an engrossing emotional core within its story, Pig rewards the patient with gripping honesty and fantastic filmmaking. It is one of the genuine surprises of the year that is sure to engage with audiences. Highly recommended.

Pig is showing in cinemas now, courtesy of Madman.