Film Review: Once Upon a Deadpool (USA, 2018) proves to be a rather bizarre and unnecessary re-release 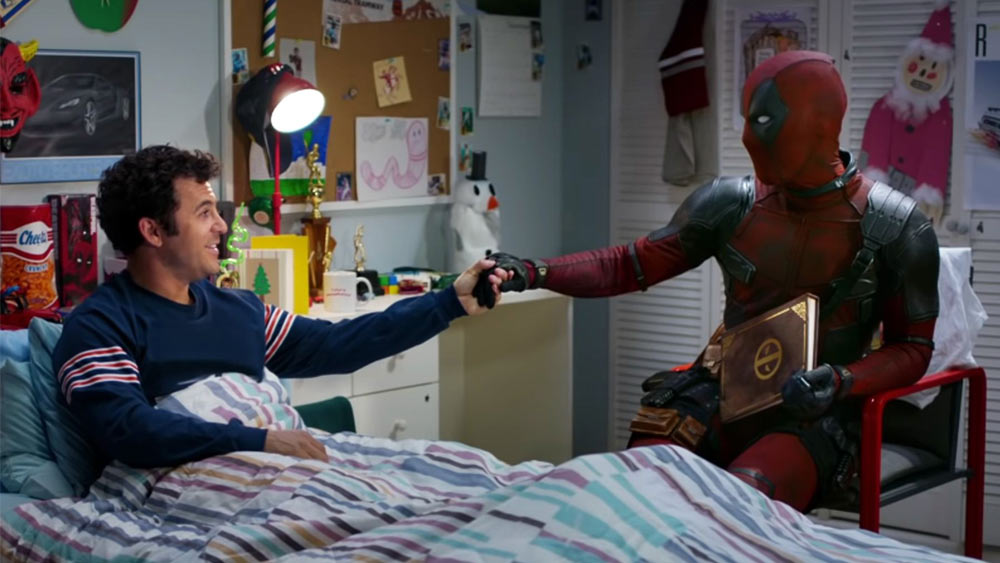 There are times when a film critic is asked to review some strange pieces of cinema, but none are perhaps stranger this year than Once Upon a Deadpool, a rather bizarre holiday re-release of Deadpool 2 bereft of the swearing, sexual content, blood, and gore that’s become this anti-Marvel franchise’s calling card. “Why?” you may ask. Honestly, I’m really not quite sure. Since this film was plonked onto the theatrical schedule back in September, there have been a few theories.

Some have suggested this is all to do with Disney, aka the incoming owner’s of 20th Century Fox, and this may be their sly way of testing the waters to see if future chapters of Deadpool could remain similarly toned down and still be successful. That seems unlikely, given how severe the fan backlash would be. You can already hear the cries of #BoycottDeadpool3. Not to mention the combined $1.5 billion the two R-rated Deadpool films have earned, thus proving there’s a market for adult superhero content. Even the seldom foolhardy Disney would be unwise to tamper with this already-successful brand.

The likely reason is purely down to the gaping hole left in Fox’s schedule by the delay of Alita: Battle Angel from December 21 to February 14. Without a big-budget film for the holiday season, they’ve cobbled together this re-edit of their most successful title of 2018 in the hopes of at least making some money during this lucrative box office period. It also takes the pressure off placing an entirely new film here to combat the other studio’s mega tentpole releases of the next few weeks. By offering up a more youth-friendly version of an extremely adult title, it could just work.

But let’s be honest here for a moment. Younger teenagers have already seen Deadpool 2, whether they were legally supposed to or not. They likely found a way to sneak into a cinema back in May. Cinemas aren’t exactly strongly policed these days. Most theatre owners are just happy to have anyone buy a ticket, underage or otherwise. For those teens who were kept out of the theatrical run, they simply waited until the home entertainment release (or torrent file) arrived, and instead enjoyed the naughty fun at home…or on their iPhone.

And that’s the inherent problem with this re-release. If you have seen the original theatrical version, there’s not a whole lot to see here. Actually, there’s a little bit less. This isn’t a daring new Director’s Cut version that presents the film in a new light à la the Richard Donner of Superman II or the vastly-improved Ultimate Edition of Batman v. Superman: Dawn of Justice. This genuinely is beat-for-beat Deadpool 2 minus the offensive bits (including the gloriously blood-soaked opening sequence that clearly just could not be edited down) plus an added Fred Savage storytime element.

As a spoof of the setup of The Princess Bride, Once Upon a Deadpool also employs the same framing device of the film’s storyline being read to Savage in his bed. Only this time, it’s Deadpool (Ryan Reynolds) playing the part of the storyteller, having kidnapped Savage and duct-taped him to the bed in a scarily-accurate re-creation of the bedroom set from the seminal 1987 cult classic. This setup obviously provides some terrific banter between captor and captive, as Savage questions the very necessity of this PG-13 reworking, takes potshots at Deadpool not really being a member of Marvel cinematic universe, and sharply points out a few of the film’s narrative flaws including the “fridging” of Deadpool’s beloved Vanessa (Morena Baccarin).

Our titular star makes it clear the only F-word here is Fred Savage, with a beeper in hand to catch any slips of the tongue by his unwitting hostage. With his antique storybook in hand, Deadpool recounts the entire tale of Deadpool 2 for those who have somehow avoided this film entirely. And every so often, the action cuts back to the bedroom scene for more barbed conversations and hefty humour. It is a charming and humorous addition, but this entire experiment feels more like an alternate viewing mode on the Blu-ray release than a fully-fledged theatrical release.

We begin with Wade Wilson/Deadpool (a glorious Reynolds) right where we left him, living blissfully with his gorgeous gal Vanessa (Baccarin). Things are going so well for the pair, they’ve begun to discuss starting a family. Oh, yes. Deadpool wants to be a Daddy. In his spare time, and with the help of his trusty chauffeur, Dopinder (a scene-stealing Karan Soni), Wade is using his impressive abilities to eliminate crime bosses all around the world, making him the world’s most feared mercenary. But when one particular gangster enacts some brutal payback, Deadpool spirals into a deep funk of depression and self-doubt.

Rescued by his old pal Colossus (Stefan Kapicic), Wade seeks some much-needed recovery at Professor Xavier’s School for Gifted Youngsters, home to the never seen X-Men (again the victim of several gags) and Colossus’ quippy sidekick Negasonic Teenage Warhead (a sadly underused Brianna Hildebrand). The brutish metallic behemoth is still determined to end Deadpool’s reign of outlandish behaviour and turn him into a real superhero, making him an “X-Man trainee.”

It’s not long before the trio is called into action after a hot-headed (and handed) young mutant, Russell (the stellar Julian Dennison) aka Firefist enacts some firey chaos on the orphanage he calls home. Realising the troubled teen is merely reacting to the cruel torment he’s been subjected to by the school’s evil staff, Deadpool takes a shining to Russell, awakening further paternal feelings in our lovable rogue. But, naturally, Wade makes a mess of the entire situation, and both he and Russell are shipped off to a high-tech mutant prison known as the Ice Box.

Things get even more complicated when mechanically-advanced super soldier Cable (Josh Brolin, again in fine form) time-travels from the future, hellbent on eliminating Russell, for reasons unknown. After a prison battle separates Deadpool and his new surrogate son, Wade makes it his mission to save Russell from Cable by creating a new team of somewhat superheroes, calling themselves the “gender inclusive” X-Force. I won’t spoil the fun of the introduction of Deadpool’s new rag-tag bunch of misfits, but at the forefront is confident and sassy Domino (a stellar Zazie Beetz) whose “superpower” is being uncharacteristically lucky. Don’t worry. It makes sense when you see her power at play.

There was the temptation to be lazy and merely copy and paste my analysis of Deadpool 2 below. Instead, I’ll simply direct you to check out the full review here. Everything I said about the film’s wicked meta pop culture references, thrilling action set pieces, pointed humour, and sharp dialogue still stands. Without the swearing and blood, the film is still surprisingly enjoyable, albeit feeling far more synonymous with other subdued PG-13 superhero fares. Crass as it may be to some, the freedom from the constraints of such a rating was what made the Deadpool franchise so unique, and there’s an inescapable sense that something is constantly missing from this re-edit.

Even so, Once Upon a Deadpool is still hardly a movie to take your kids along to. Even without the gore, the violence is still fairly unsuitable for the younger market. And while the F-bombs may be entirely gone, there’s still a hefty dose of bad language left in that evidently fits the Motion Picture Association of America’s criteria for this rating. Make no mistake. This is indeed a heavily censored film, but nowhere near the “family film” tag that some have unwisely placed on this re-release.

So, just who is Once Upon a Deadpool for then? If you are a huge fan of the franchise, it’s likely worth a look to see if you can still enjoy Deadpool 2 without the elements you likely loved the most. Outside of the core fanbase, it’s hard to say who else will be interested in this decidedly strange property. There is one added post-credits element (and a slightly reworked “cameo”) that left several of my audience loudly sobbing. I won’t say any more, but perhaps this in itself is enough to make Once Upon a Deadpool completely essential viewing.

Once Upon a Deadpool is in cinemas today.