Film Review: Fatale is an entertainingly frivolous throwback to the cinematic thrillers of the 1990’s 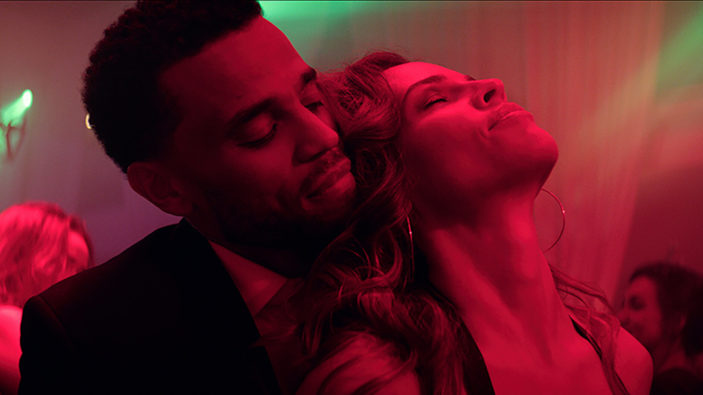 Fatale tells the story of Derrick Tyler (Michael Ealy), an eager sports agent who seemingly has the perfect life. A rising business, his loving wife Tracie (Damaris Lewis), immense wealth; it sounds like the perfect success story. However, underneath the façade lies a crumbling marriage on the rocks. Through the behest of his friend Rafe (Mike Colter), Derrick goes with him to Las Vegas for a bachelor party to take his mind off things.

It is there where he meets Val (Hilary Swank) and the two strike up a certain alluring chemistry. After a few drinks, some fireworks and the fine art of dancing, the couple end up sleeping together. Willing to forget the whole thing, Derrick heads back home and vows to renew and fix his relationship with Tracie.

But his sexual dalliance is not the only thing that will throw his life off track. The household experiences a violent break-in with Derrick fighting the intruder off. And on top of that, the person leading the investigation on finding the culprit is none other than Val herself. All the loose threads, the lies, the duplicity comes back to Derrick; throwing his life in a tumultuous spiral.

Fatale is from director Deon Taylor, screenwriter David Loughery and lead actor Michael Ealy; whom are responsible for trashy pieces in the past decade that harken back to ‘90s cinematic thrillers. With films like The Intruder, Lakeview Terrace, Obsessed and The Perfect Guy – in which they are all riffs of either Unlawful Entry, Fatal Attraction, Sleeping with the Enemy and others; the trio has worked within a guaranteed successful formula that delivers exactly what it promises for undemanding audiences. If it ain’t broke, don’t fix it, right?

With the possible exception of Lakeview Terrace, all the above throwback examples have that disposable throwaway feel which are conveyed by the pedestrian filmmaking that is more functional than formidable. In the case of Fatale, director Taylor has assembled a sleek and professionally packaged piece of genre schlock that undeniably makes the film more watchable. It helps that he has cinematographer Dante Spinotti on board; who lends the film ample amounts of gloss and colour that makes the film fun to look at. There are visual cues in the film that are references to thriller classics like scenes in the beach and the tunnel that owe a debt to Body Double by Brian De Palma that cineastes will appreciate.

As for the content, the film is essentially a mix of Unlawful Entry (which is about a psychotic cop that terrorizes a married couple) and Fatal Attraction (which is about a one-night stand that starts the intrusion of a scorned woman in a man’s happy existence). While the film may not dive deep into the lurid sexuality of the latter (despite a few sex scenes which are more puritan given the context), the storytelling digs into the expected tropes with an enjoyable relish that does not veer into self-awareness, but almost giddy excitement that makes experiencing said tropes feel somewhat invigorating again.

The cast all do their part in adding a sense of credibility to the proceedings (Colter is enjoyably scummy here) but it is the pairing of Ealy and Swank that leads the film to the finish line. Ealy is solid if unimpressive in the role of Derrick; but the fault does not lie with his skills since he has been playing these types of roles numerous times that it cannot help but feel a bit pat. But the star of the show is clearly Swank.

For her character of Val who has a complicated past involving alcohol and bad decisions, deviousness and controlled professionalism in her job, Swank does a fantastic job in conveying the many levels of her character to life. She could have easily brought on to the table a performance that either borders on caricature or veers into self-seriousness. However, Swank finds the perfect balance that makes her work fun to watch (her line delivery on some of the double-sword dialogue hits well) and weighty enough to go along with her predicaments.

As expected with these types of thrillers, the third act of Fatale goes straight into the peak of ridiculousness. Where mobile phones become magical plot devices, characters move at light-speed travel, moments in the story are conveniently forgotten until they are established again in order for the story to reach its conclusion and of course, the eventual and inevitably outrageous violence. If one can stomach such a trashy outcome, it is clear that one is part of the target audience of Fatale.

Overall, Taylor and Loughery have assembled an enjoyable nuts-and-bolts throwback thriller with Fatale. Even if it lacks the prurience of its predecessors; Spinotti’s cinematography and Swank’s razor-sharp acting take it up a notch to make it a hoot and a half.

Fatale is showing in cinemas now.