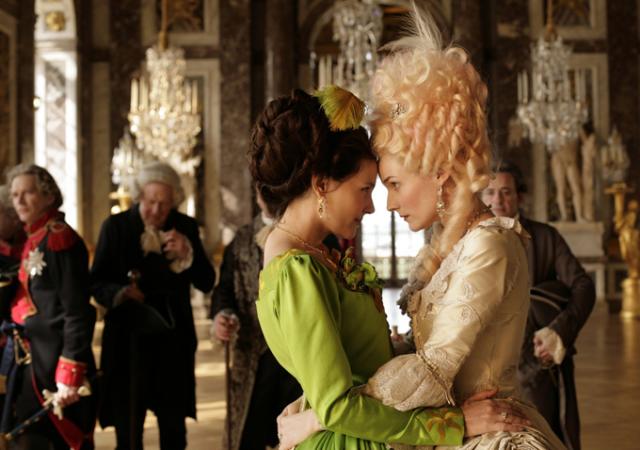 Set on the eve of the French Revolution (and based on the novel of the same name by Chantal Thomas, winner of French literary award the Prix Femina in 2002), Farewell My Queen, follows a fictional account of the early stages of the monarchy’s epic downfall through the eyes of the court’s peons – specifically Marie-Antoinette’s (Diane Kruger) infatuated servant, Sidonie Laborde (Léa Seydoux).

The palpable glamour and grime of the period unfolds on the precipice of revolution, with dead rats, sewers and disaffected citizens set against the opulence, finery and creamy décolletages of the royal court. But when the shocking news of the storming of the Bastille reaches the walls, deserters and traitors abound, and as heads are set to roll, the Queen’s legendary self-obsession and maddening lack of perspective comes to the fore as she frets about embroidery and jewels with an era crumbling around her.

At the film’s centre is a lesbian love affair between the Queen and the duchess of Polignac, voyeuristically observed through Sidonie’s eyes. A passionate homage to Marie-Antoinette as an early gay icon, the affair is a locus of betrayal, amid political tumult, frantic denial and a psychological love triangle.

A foreboding sense of inevitability adds a heaviness, and along with hand-held camera work in cloistered, candlelit corridors, establishes the chaos and panic of the time, mixed with the heady, sexy and at times drunken, end-of-days atmosphere.

Grand and sweeping, the film is a subtle condemnation of the folly of the French monarchy but pays close attention to the humanity of fear, offering a cinematic, visually sumptuous and tension-filled meditation on a heavily-mined but rich period of history.