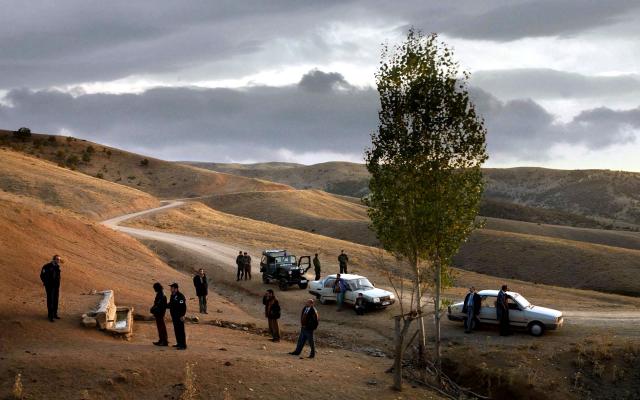 Winner of the Cannes Grand Prix, Once Upon a Time in Anatolia follows the overnight and early morning journey through the wind-swept Anatolian steppes of a group of forensic and law enforcement officers along with two murder suspects in search of a body they buried, but can’t remember where. It’s a long night, and as they drive from place to place, the wretchedness of the situation – for all of them – mounts, and tempers begin to unravel.

Moving at a staggeringly languid narrative pace, that’s pretty much it for a long time; it’s a film not driven by what happens next, but by the expectant sense of foreboding and almost gothic imagery. Withholding more than it gives in the way of plot and detail, the film offers a subdued rumination on the fragility of life, scattered with meditations on morality, marriage and manhood – but also yoghurt, lamb chops and prostates – amid the bored banter of the tired and irritable.

But with this shadow, there is light; like the warm shards of sunlight that break through with dawn on the Anatolian steppes, the startling glow of the lanterns that light up the ramshackle farmhouses, and a farmer’s beautiful daughter bathed in candlelight. The tone of the film is lifted by a smattering of comedy of errors, like undertakers forgetting body bags, bodies that don’t fit in car boots, and a police super-intendant requiring constant toilet breaks.

Shot in long, unbroken single-takes, the trance-like tension is broken with the occasional thickening of plot when subtle but shocking details of the characters’ lives are revealed, only to slip quietly away amid long, existential moments of characters staring into the middle distance.

Sounds like it might be a downer, but Anatolia’s weary pace (and lengthy run-time at 157 minutes) is buoyed by dream-like cinematography of dawn-lit steppes, a breathtaking reminder of the natural beauty of a harsh environment. Delicately handled twists of plot place this film many tiers above any standard Hollywood offering, and the result is a slow-burning, darkly told exploration of humanity.