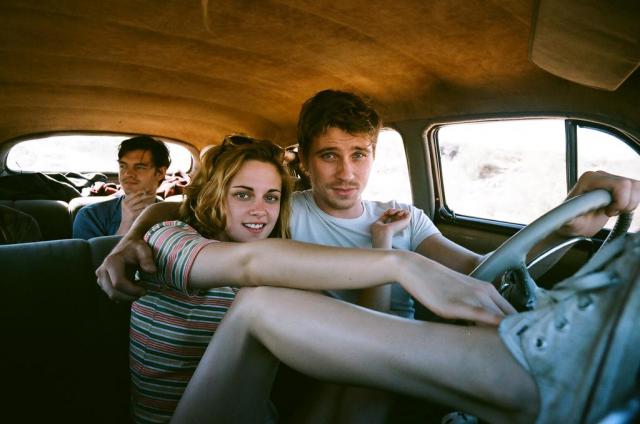 Kerouac’s classic Beat-generation manifesto On The Road transforms to the big screen in all its pulsing, joyful free-wheeling madness, complete with crazy cats, hustlers, junkies, and poets.

Brazilian director Walter Salles (Central Station) and screenwriter Jose Rivera (The Motorcycle Diaries) deliver a pitch-perfect manifestation of the cult classic, transporting the viewer to the time and place: postwar America, the pulsing jazz-era and disaffected youth eschewing the American dream of Henry Ford and a quiet life in the suburbs. His characters fling themselves bravely on the fortunes of life and are tossed and thrown joyously by its crushing waves. What Kerouac depicted in his rolling, rollicking account, was a genuine blue print for the hipster prototype – before its connotations of vague contempt.

All the major players of the era make it into the book via pseudonyms and come to life in the film. Sal Paradise (played by Sam Riley) is a proxy for Kerouac himself, while Allen Ginzberg is represented through Carlo Marx (Tom Sturridge). The inimitable Dean Moriarty is based loosely on Neal Cassady (played by Garrett Hedlund), with Mary-Lou, his 16-year old prodigiously sexually uninhibited wife, as Luanne Henderson (played with aplomb by Kristen Stewart). William S Burroughs appears as distinguished junkie Old Bull Lee (played by Viggo Mortenson), and Moriarty’s long-suffering wife, Camille (Kirsten Dunst playing Carolyn Cassady).

This is the full technicolor Beat experience: the insatiable Dean Moriarty is painted in full potency – a blazing inferno of Pied Piper-like charisma, living life at full speed, full throttle and full volume. Scat-paced, burning bright and short,  he’s a maddeningly unreliable narcissist ready to leave his wife, his babies, his most loved companions on a selfish, hedonistic whim. Also, there’s the deeply sensitive, Carlo Marx, searching for the one great poem within himself, given to bouts of desperate self-doubt, with a deep – and inevitably betrayed – love and infatuation for Moriarty. And Sal Paradise, a consummate writer, living a life on the road, pursuing the company only of “the mad ones”.

The film remains faithful to Kerouac, though it was once described as ‘unfilmable’ for it’s unconventionally broad (almost absent) narrative arc. It has the same rolling, pulsing, episodic feel, filled with whimsy, but also of substance, life truth etc, – the most important stuff. Viewers are best advised that this is a film of a book, not about one, and adheres to the same transient, casual style in no hurry to get somewhere, savouring the journey instead. It rolls along, possibly going nowhere, but then again, that’s all in the beat. Or, as put perfectly by a fellow traveller to Sal early in the film “Are you goin’ someplace? Or just goin’?” Sal responds, ‘Just goin’”.