Film Review: Corpus Christi is a gripping drama about the murky and hypocritical grounds of faith, redemption and morality 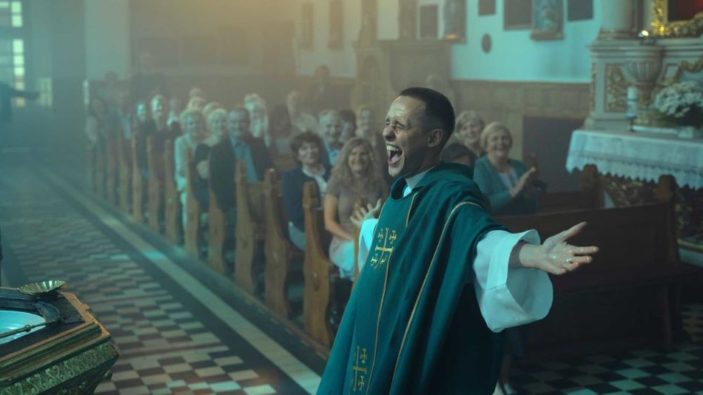 Corpus Christi follows the story of a young inmate Daniel (Bartosz Bielenia), who is imprisoned for second-degree murder. During his long stint, he has a spiritual awakening and he makes it his goal to become an ordained priest. But his journey does not come easy due to his criminal background. After his release, he is assigned to work at a sawmill and during his time there, he notices a small town and through a small mishap, he is mistaken for a priest.

Seeing this as his only way to fulfil his dream, he goes along with the ruse and the townspeople respond positively to his methods after he takes over the original priest who has taken a leave of absence due to rehabilitation. But not all of his methods are positively received when Daniel investigates a past tragic incident involving a bus driver who may or may not have been the major cause of the tragedy. But his ruse cannot last for long when his criminal past catches up to him and it is through his conflict that his faith is truly put to the test.

Part redemption tale, part fish-out-of-water story and part mystery; Corpus Christi is a film that stands out brilliantly due to its smooth melding of story threads within the compelling character arc of Daniel as well as writer/director Jan Komasa’s insistence in taking the road less travelled in his storytelling.

One of the merits of the film is how Komasa never sugar-coats the drama behind the story. With all of the flaws of Daniel on display like his arrogance and impulsiveness like in a scene where he deliberately misleads a woman in a church; Komasa knows that the journey that Daniel undertakes should not be an easy trek. It also helps that Komasa thankfully never takes the route of melodrama to make the audience sympathize for his characters as they are all believably internalized.

The effects that the tragic event ripples through the townspeople in a compelling manner; especially when they are all seen as emotionally inert while the youths all feel confined by what is essentially the sins of the adults and their own inaction to do something about the tragic incident. Komasa makes it a great compliment to the character arc of Daniel and manages to meld the two together brilliantly; bringing the themes of forgiveness and faith to light in all of its glory and hypocrisy.

In the main character arc, none of the obstacles that Daniel faces are contrived and they are all formulated organically around Daniel’s actions (or inaction) like his hesitance to face his past and even his straightforward admittance to the townspeople that he is a murderer (which is amusingly understood and reflected with ease).

The production values are high quality and the stand out is the cinematography by Piotr Sobociński Jr. Best known for working with acclaimed filmmaker Krzysztof Kieślowski, Sobociński Jr’s work is absolutely stellar as he is able to complement the drama of the story by making the surroundings beautifully murky (showing the conflicts as neither black nor white in their nature) and lending the proceedings a sense of grit like his use of handheld shots in the last act.

But most of all, the performance from Bielenia leads the film to its salvation. He never plays the character of Daniel as overly apologetic but a man who is going through a conflict of trying to be his best self in opposition to his current honest self and Bielenia manages to make the role riveting in his nuance and somehow sympathetic in his sincerity in achieving his goal.

Overall, Corpus Christi is a striking drama about the murky and hypocritical grounds of faith, redemption and morality. It is beautifully acted by Bartosz Bielenia and writer/director Jan Komasa admirably never goes for easy answers for his conflicts. Highly recommended.