Film Review: Christopher Robin (USA, 2018) tries to be playful but is a bit too dour 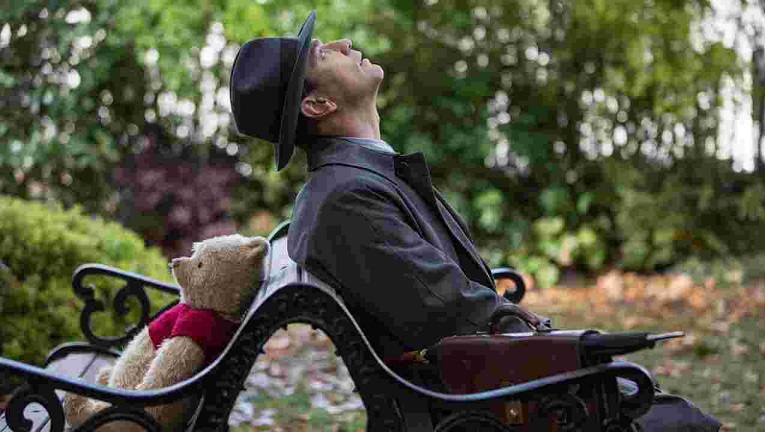 It can be hard watching characters who you’ve grown up with and have a long standing nostalgic attachment to, get brought back to life on the big screen. There’s something deeply rooted in the warmth of how you remember them, and how sometimes the new version doesn’t quite stand up to that test. The trailer for Disney’s latest live action adaptation Christopher Robin seemed to lend itself a somewhat fun, playful and whimsical fair but unfortunately the finished product isn’t quite what was expected.

An initial prologue for the film has a young Christopher Robin (Orton O’Brien) playing with Winnie The Pooh (voiced by Peter Cummings) and all his other animal friends of the Hundred Acre Wood. But the young Robin is about to head off to boarding school and can no longer play with his friends so he has to say goodbye. Flash forward to middle-aged Christopher Robin (Ewan McGregor), married to Evelyn (Hayley Atwell) and with a 9 year old daughter Madeline (Bronte Carmichael). He is under pressure at work and forced to once again miss spending time with his family. So it’s up to Pooh and Co to help Christopher Robin re-discover the joy and value of play and the importance of his family.

Directed by Marc Forster (Finding Neverland), it attempts to mine similar tone to Hook and Finding Neverland, as it thematically leans in to the tale of forgotten childhood fantasies and how joy can be re-invigorated. The script by Alex Ross Perry, Tom McCarthy, and Allison Schroeder doesn’t quite seem to fully latch onto the whimsy and delight though. For the majority of the film we’re treated to sombre and dour circumstances. Christopher Robin is a bit of a lousy dad, “All work and no play makes Jack a dull boy”, well here it’s Christopher. So much so that his family is beginning to resent him, and his gin rummy cards obsessed neighbour is a weirdo, and his boss Giles Winslow (Mark Gatiss with a hideously hilarious wig) is probably going to fire him and 20% of the workforce if Robin can’t find some cost cutting solutions. It’s no wonder that when Pooh shows up Robin thinks he’s gone a bit mad. But he rolls with it because the silly old bear is his friend.

It’s here at this juncture where things seem to go a bit wobbly. Robin gets recruited by Pooh to help find the other Hundred Acre Wood animals, as they seem to have vanished. The disappearance of Pooh’s friends seems to coincide with Robin’s adulting stress, and their reappearance when he returns to play. Does that imply that he can will them into and out of existence? That’s some rather deep and creepy existential stuff there for a kids movie.

There’s also some weird logic failures in this film that don’t quite seem to add up, when those around Robin can see and hear the stuffed toys. Whilst in the original animation it suggests that all of the animals were part of his imagination. Here it implies that they’re real and just so happen to live in a magic wood realm accessible via tree portal. And the human actors feel like they struggle a little, with Ewan McGregor, almost constantly looking like a sad or confused puppy which is cute but exhausting and sadly Hayley Atwell is barely even in it and so underused. It’s almost laughable that the CGI stuffed toys have more life in their button eyes and worn fur.

What also didn’t help was some of the cinematography by Matthias Koenigswieser (After The Fall) had moments that felt like they were out of a horror movie. A thick fog blanketing Hundred Acre Wood, shoe prints in mud, a deep Heffalump trap pit, a knotted hole in a tree trunk, a red balloon. Maybe the kids will see it a little differently but it all looked and seemed a little too eerie.

Where the film’s energy picks back up again is when Pooh and Co leave the woods in a somewhat ill-conceived but ultimately adorable attempt at helping Christopher. Even the trailer marketed the film as such, so it feels a shame that this ends up being the third act and it all feels rushed. I wanted to see more of Tigger’s (Peter Cummings also in fine giggly voice) bouncing, and whodathunk that the clinically depressed Eeyore (Brad Garrett, genius voice casting there) could almost literally steal the entire movie away from everyone else? Visually some of the shots of Hundred Acre Wood, aka Ashdown Forest and Windsor Great Park in real life, are absolutely gorgeous. And of course we can’t have a Disney movie without a suitable happy ending, so there’s that.

Christopher Robin feels a bit too dour, dark and depressed for a movie that is meant to be about alive stuffed toys, the joy of play and living in the moment. On the plus side the stuffed toys are adorable, the Hundred Acre Wood really is ethereally beautiful, and it does have some funny moments between characters. It would’ve been nice to see them take this film to a more logical next step of having the animals come to save their hero as the main focus.