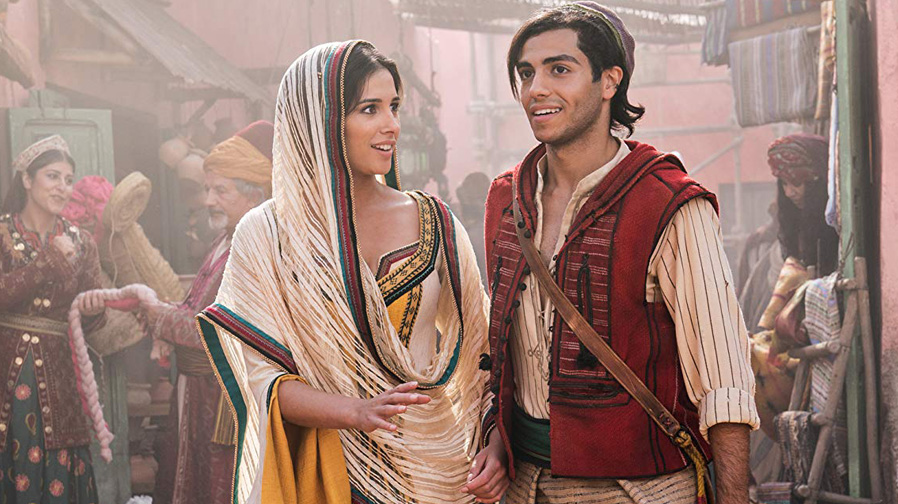 It’s easy to be cynical about the Disney juggernaut of rolling out live action remakes of their classic animated properties. We’ve already had Dumbo earlier this year which was watchable but felt like a little misstep by Tim Burton. Next comes Aladdin, which along with The Lion King releasing July 17 will be the 1-2 sucker punch of 90s movies remakes. And if you’re a kid of that era, ensuring that both of those movies hold up will be crucial for Disney’s reputation.

If you haven’t seen the original animated film, or the musical stage theatre production, it obviously won’t hold the same nostalgia or expectations for you. But this remake does a good job of sticking fairly true to the same story and hits all the same big beats. Our street rat hero Aladdin (Mena Massoud) will rise up from a life of poverty to win over Princess Jasmine (Naomi Scott) with a little help from his friends Abu the monkey, Magic Carpet and a Genie (Will Smith). Aladdin must also thwart the evil plans of Jafar (Marwen Kenzari) who is attempting to usurp the Sultan (Navid Negahban) and rule over Agrabah.

The lead actors deliver solid performances, Mena Massoud captures the free spirited Aladdin, with his charm, sleight of hand petty thievery and exceptional parkour skills. Whilst Naomi Scott embodies the strong independent Jasmine, determined to rule Agrabah. Providing a strong progressive female role model for younger viewers, which is a fresh take for this Princess. Will Smith manages to do a very “Will Smith” take on the Genie, which is both smart and necessary since it would be impossible to replace Robin Williams’ iconic voice acting portrayal. I was a little unnerved by Marwen Kenzari since you probably shouldn’t be so attracted to the villain. It’s a shame that he isn’t more menacing though, since animated Jafar was much more terrifying. The Magic Carpet is still the real MVP, and it’s great to see another amazing performance by some sentient fabric. Now all we need is a spin-off pairing up with the Cloak of Levitation from Doctor Strange.

Guy Ritchie is a director who is great with quippy dialogue and visually interesting action sequences, and here he gets to deliver on both of those. But where he always struggles is the emotional moments that are meant to gut-punch you. It’s this inability to quite marry up the laughs plus the action with the heart that results in some tonal inconsistencies. There are times where it feels like they are moving through each set piece without any fluidity. As they move from bombastic action, to comedic beat to introspective emotional moment that doesn’t quite stick the landing. The screenplay by both Ritchie and John August doesn’t add too much to the original template other than Jasmine getting a new song and a couple of extra scenes. There’s also the addition of handmaiden Dahlia (Nasim Pedrad) who gets to unexpectedly play a love interest for another character and provide some additional comic relief. And sure this film is great for onscreen diversity and representation, but there is a little unease at the fact that Arab culture is being shepherded by a caucasian director. There’s no real opportunity here to explore fictional Agrabah as a possible stand-in for real world Middle Eastern culture, besides a bustling marketplace we don’t get a sense of “place”.

Musical genius Alan Menken once again returns to put his stamp on the score and soundtrack. Some adjustments are made to the classic song “Friend Like Me” to allow for Will Smith to add some of his own hip-hop flair. Whilst other ear-worm classic “A Whole New World” gets two versions – one with Massoud and Scott singing, and another by ZAYN and Zhavia Ward.  Additional help from Oscar nommed musical duo Benj Pasek and Justin Paul (aka Pasek and Paul) reworking the opening track “Arabian Nights”, and also writing a new song for Jasmine titled “Speechless”. It’s the latter track that gives us a chance to hear Scott’s vocals truly soar. Overall though there hasn’t been too many adjustments made to the original song choices, which will keep fans happy.

Alan Stewart’s cinematography and the visual effects work has moments of hit and miss. The sweeping aerial shots of Agrabah, as they fly over it on a night time magic carpet ride is pretty enchanting. And the “Prince Ali” sequence is an extravaganza of colour. But both the key animals in the film, Abu the monkey and Iago the Macaw look painfully CGI. Whilst the Genie flits in and out between both good and bad with his excessively cartoonish features and blue skin. At least for him it makes sense to look a little bizarre. What doesn’t look bizarre are Michael Wilkinson’s costumes; which are the epitome of sumptuous as they showcase Arab, Indian and Asian cultures. Jasmine in particular gets a variety of looks for different occasions that all ought to have a fashion show.

Aladdin has some tonal inconsistencies, struggling to find fluidity and embrace its more emotional moments with its adventurous and fun spirit. This live action adaptation is visually impressive, and the performances by all of its cast are solid but It’s not quite enough to surpass lofty expectations set by the OG animated film. Considering how much this film is almost beat-for-beat identical to the animated film, arguments could be made for why it was even made. But tempered expectations can allow you to sit back and enjoy the magic carpet ride for some live action adapted fun.