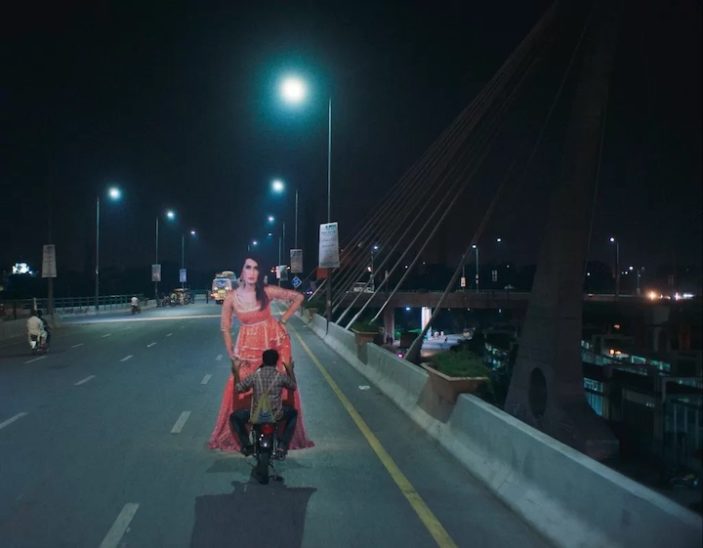 The first Pakistani film to premiere at Cannes, Joyland is a daring queer drama by director Saim Sadiq about forbidden desire.

The extended Rana family live together in Lahore and the opening scenes are celebrations for the arrival of the fourth child for the older brother’s family. The fourth girl in a row is an obvious disappointment to the family. The younger son Haider (Ali Junejo) is the home helper, while his wife works to support the family. With pressure on Haider to get a job, he finds a job as a backup exotic dancer. Although he hides the real job from the family, as he now has a job, his wife has to give up hers to help run the household. This is an early example of the expectations and roles in the patriarchal family, ruled over by wheelchair-bound head of the house.

Despite the restrictive social norms, men flock to see men in drag perform on stage. Alina Khan plays the role of Biba, a trans man partway through transitioning, who is trying to improve her act to make more money to complete her surgery. Slowly the two begin an affair, which will naturally turn their both worlds upside down.

The film has a painterly quality about it, with dark tones reflecting the almost suffocating atmosphere of the society that they are part of. Expectations and rigid role models surround them; when Biba sits in the women’s section of the train she is castigated by other female passengers. This film turns long-held gender roles on their head and would no doubt be considered subversive in its home country. The pacing is perfect, we become emotionally attached to all the characters. We see their flaws, their desires, and their confusion.

One moment of escape comes when the two women in the household escape for an evening to Joyland, a carnival in town. This contrast in emotion, one of happiness seems to come at a price as the repercussions of that evening rebound in the days following. Despite the constant struggles, the film gives hope of a sexual rebellion.

It’s easy to see why the film had an extended ovation at the Cannes film festival this year, as the depth of understanding and compassion for the characters shines through in a positive and uplifting way. A sad and dark film that stays with you long after the viewing.

Adelaide Film Festival (AFF) cements Adelaide’s place on the international stage as a hub of vibrancy, creativity, and innovation. Over twelve days this world-renowned festival provides a wide range of opportunities for festival-goers to be inspired, entertained, and educated, through a unique program of the best of global and national cinema, forums, collaborations, and special events.