Tonight at the Paramount Theatre at SXSW, Long Shot, the new romantic comedy starring Charlize Theron and Seth Rogen, had its first ever public screening. Not due for release until the start of May, the film sees the pair playing something akin to star-crossed lovers, with a political bend; Theron starring as America’s Secretary of State, who hires a childhood friend (Rogen) to write for her Presidential campaign bid.

It all starts when a newly jobless Fred Flarsky (Rogen), wearing a neon jacket ripped straight out of the 80s, spots her at a Boyz II Men concert (that’ll make more sense when you see the film). It comes out that she was a crush of his from childhood (when she was his babysitter), and then after almost punching an unrecognisable Andy Serkis in the face (him playing something of a Murdoch character), she hires him to help with her speeches – not without resistance from her team (the always hilarious June Diane Raphael and Ravi Patel). Yadda yadda yadda, romance develops.

The film also stars O’Shea Jackson as Fred’s best friend, Bob Odenkirk as the President and Alexander Skarsgard as the Prime Minister of Canada.

While we’ll save the full review for closer to the date of official release, I will say that the film is hilarious. While travelling down some familiar territory, the script by Liz Hannah and Dan Sterling is clever, the dialogue witty and regularly painfully funny, and the film makes Theron and Rogen’s romance believable and something you can’t help but root for. The chemistry is there, though unlike most films of the genre, this time it’s the female lead wearing the shoes in the relationship, and asking her male counterpart to change for her… which in itself makes for an interesting dynamic, even if it’s been done to death the other way around.

At the premiere screening, Theron said she was “hashtag blessed to be in a movie with Seth Rogen”, while standing for a Q&A alongside O’Shea Jackson, Ravi Patel, June Diane Raphael and the film’s director Jonathan Levine (also responsible for 50/50 with Rogen). Theron mentioned that she had always been a fan of his work and had always wanted to work with him. She also pointed out how this particular role was something of a change of pace from the run of films where she died or spent a great deal of time killing other people.

She and director Jonathan Levine had also admitted to being so nervous about the screening, and the audience hating it (which they absolutely did not), so had become fairly drunk by the time they hit the stage. Some of the crowd may have been in the same boat too, with free drinks handed out prior to the show (something I don’t think I’ve seen before at a SXSW Premiere). But the intoxication proved to be of little consequence as the Q&A was short-lived; SXSW Film Director Janet Pierson humourously asking Seth Rogen to talk about getting Boyz II Men to appear in the film, instead of asking him his feelings on working with Charlize, which served as a segue for Rogen to surprise the crowd with a live performance from Boyz II Men.

The trio came out and performed fan favourite “MotownPhilly” (which featured in the film) and one of their biggest songs of all time, “I’ll Make Love To You”, which saw them distribute roses to the audience, as Charlize Theron danced side of stage (at one point joining them too). 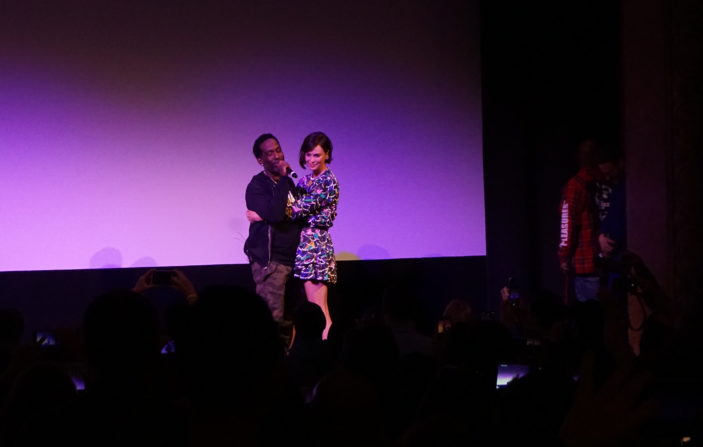 It saw the excitable SXSW crowd on their feet, cheering loudly and leaving with massive smiles on their faces. It’s fair to say the film’s producers pulled out all the stops to make this a special screening for everyone; even giving all guests a special Long Shot branded neon jacket inspired by the outfit Rogen wears early in the film (before he’s “Pretty Woman’d”, as some other articles have compared).

All this together made for what may have been the most enjoyable film premiere ever at SXSW; but even without all the bells and whistles the film stands set to be one of the best comedys of the year.

Long Shot will be released in Australia on 2nd May by StudioCanal.

Photos by the author.