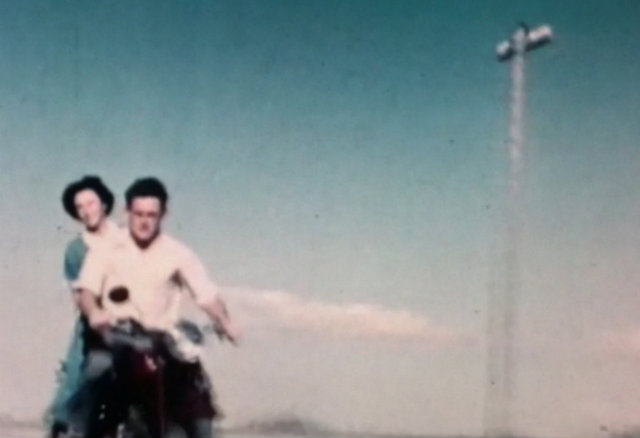 A collection of home movies that tell the story of Israel from 1930 to the 1970s, and screening at the 2013 AICE Israeli Film Festival, Israel: A Home Movie is an intricate and kaleidoscopic retelling of history via as-it-happened style footage, reframing the historical through the personal.

The footage itself is dazzling. An archival treasure of mint condition 8mm, 16mm and Super-8 film, both nostalgic and confronting; footage from the 1930s showing early Jewish arrivals, the trauma of Holocaust survivors in Israel, the absorption of Jewish immigrants through the 50s, the euphoria of the end of the ‘67 war, and a camping trip gone awry as Syria makes a surprise attack on Yom Kippur in 1973. But also, all the familiar joys of family and life: weddings, birthdays, potty training and playing in the backyard. This is footage salvaged from cellars and attics, pieced together in a rich mosaic to tell a seamless narrative of the fledgling state of Israel.

Or is it? While the English translation of the film’s title implies a casually objective and innocuous small-scale retelling of a tumultuous history, a more direct translation from the Hebrew title, ‘Cach Rainu’ would be something closer to “How We Saw It”.

Which in some ways makes more sense. As we are taken through major historical milestones – early Zionist pioneers fleeing mounting anti Semitism in Europe, tensions with the local Palestinian population and some fairly confronting footage of combat in the 1973 Yom Kippur War taken by a morphine-affected soldier as he wanders amongst the shelling – we are guided through these events almost exclusively by Israeli voices. The ‘we’ in the direct translation of the film’s title flags a conspicuously absent Arab perspective, and a reliance on unreliable narrators to guide viewers through the footage.

To be fair, there is very brief interview with a Palestinian man who, while watching soldiers and civilians march through his recently reclaimed land in the West Bank describes the feeling as being like a knife in his heart, and the depiction of gratuitously cruel treatment of Egyption POWs after the 1967 Six Day War is not flattering to Israel. “War turns men into beasts”, one narrator declares over footage of these POWs barefoot in their underwear being told to stand up and lie down over and over again.

Viewers would do well to brush up on their Israeli history before viewing, as much is taken for granted and goes unexplained. And with only the voices of amateur filmmakers to guide us through the meaning of the events we are witnessing, we are left disoriented on how to position ourselves in this highly controversial and ongoing conflict.

By the film’s end, you may well be left wondering if this is a highly subtle and sensitive critique on the power differentials between the coloniser and the colonised, or a biased rehashing of Zionist rhetoric employed to make the point of the urgency of a Jewish state in a post-Holocaust world. Do ‘home movies’ get closer to the truth than conventional history as the film suggests? And if so, have we just witnessed the truth through these home movies? While the film confidently asserts this idea (with all the brash charm for which Israelis themselves are known), and some might be drawn into the intimacy and scale of this method, viewers attuned to the inherent bias of the way history is told, may well be left with questions.

The AICE Israeli Film Festival 2013 will tour Australia from the 13th until the 28th of August. Details: http://www.aice.com.au/iff-welcome.php‎