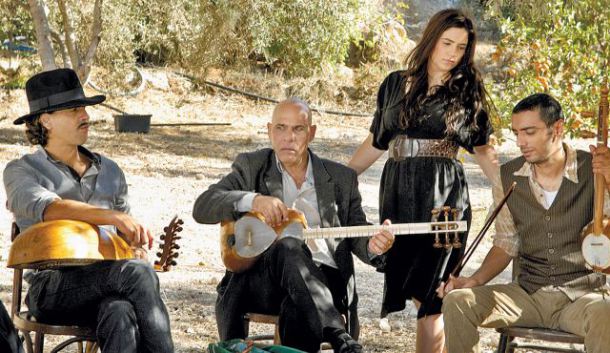 In an unspecific time in an unspecified part of Israel, Amram Mufradi (David Tassa) is on a mission. It is his dying father’s last wish to hear ‘The Ballad of a Weeping Spring’, a song written by his band, the Turquoise Ensemble, 20 years before, but as yet unperformed due to a tragedy that has echoed through to the next generation. Steeped in the spell-binding music of the Middle East, known in Israel simply as, Mizrachi (Eastern), what ensues is a buddy-film, road movie, getting-the-band-back-together piece of cinema, heavy on genre borrowing from mid-century cowboy flicks, to form a genre new to Israeli cinema, nicknamed, I am so happy to report, the ‘Felafel Western’.

A word of caution: the earlier you give yourself over to the kitschy, shmaltzty, farcically predictable conventions of the genre, the better; expect a smattering of slapstick, villains to be overcome, prodigal sons returned, absent fathers redeemed and good triumphing over it all (and, as a notable aside, where female characters are not musically talented, they are mere passive enablers for their male agents).

But despite (probably because of) these formulations, the film is a delightful romp through nostalgia. What at first appears clunky and telenovela-esque, soon reveals itself as a charming reworking and reimagining of a time long gone, and, above all, the perfect vehicle to showcase the music.

The music is the foundation for the film, with the narrative plot a thin excuse to explore the rich musical traditions, instruments and styles of the Middle East. But it’s also deeply symbolic. The subtle lynch-pin of the film – its bridge, if you will – comes in the form of a deeply moving folk song. Entitled ‘Yearning’ and sung with an almost unbearably heartbreaking combination of gusto and pathos (incidentally, by a character who doubles as the bar maid and is soon after found behind the bar again), the song’s lyrics, “Yearning keeps the world together; yearning keeps lives together”, speaks to the themes of the film and also of the region. This deeply nostalgic film itself is yearning; yearning for a time when acoustic instruments were king, and when the keeping of a promise trumped all else.

But regionally, this theme is also significant. While it cannot be considered a political film, this nostalgia seems to extend to a yearning for peace and harbours a ‘looking back’ mentality that is central to Zionism. This idea also plays to a long-running argument advocating for the past that is suspicious of technology (“We don’t use plastic here”, he is told by the barman in the opening scene), trusting instead in the old fashioned, dependable and known, and thereby romanticising the past. It’s an idea that inevitably runs into some logical trouble, being, very often, nostalgic for something that arguably never existed. Above all, though, is the nostalgia for the redemptive power of music.

Through music, the film explores an age-old conundrum of generation gaps, tradition versus progress and old versus new. Amram is a musician of modern music; blues, rock and pretty much anything you can play on the synthesizer. Having eschewed the Kamancheh, a Persian string instrument, that his father taught him to play as a child for his beloved ‘synthie’, he represents a new generation. But it is the old generation, players of the acoustic instruments, to whom he must turn to help him on this quest.

Dramatic and riveting it is not, but it’s still a charming and intensely likeable piece escapism. Go see it, and takeBooba and Zeide – they’ll love it. And really, for all the tension and conflict that this region has known, it’s nice for once to forget the politics and instead remember the things that bind us.

Head HERE for more details about this film’s screening times during the 2013 AICE Israeli Film Festival, which tours Australia through August.