Do you remember your first Walkman?

I know I do. I recall feeling like I had a universe in my pocket. Well, not in my pocket. Clipped to the belt near my packet. Either way, I had a tiny, sleek box that would accept a cassette and click shut with a satisfying “schlick” noise. I’d depress a button, and the music would start. And it didn’t matter where I was, or what I was doing. Suddenly, I was somewhere else. I was transported.

Last week, Sony transported me quite literally halfway across the world to Tokyo, Japan, where they’re celebrating the 40th Anniversary of the Sony Walkman. Right in the heart of the Ginza district, we were deposited as a group in front of the stunning site of the old Sony building, now demolished and turned into a kind of sprawling subterranean installation space. There, on the decking, staring out at the bustling, neon-soaked, sleek Tokyo cityscape was a replica of a Walkman. A really big one. 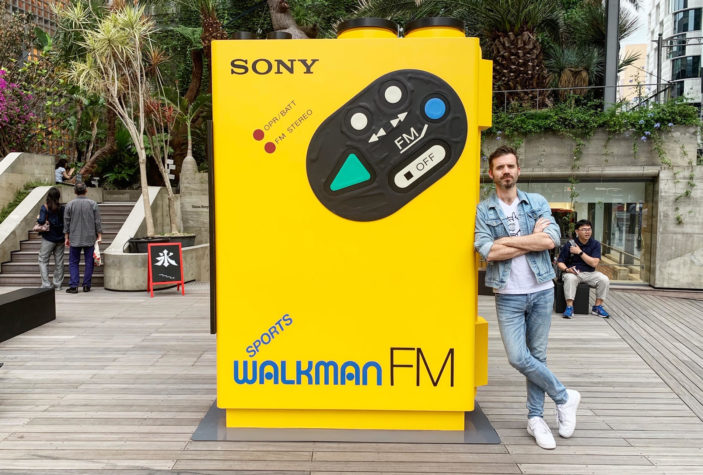 If you grew up in the 80s or 90s, you’ll understand how it felt to listen to music without being confined to a device in your home. There’s a scene in the first Terminator where Linda Hamilton’s housemate jubilantly struts and stomps around the home using a primitive portable music player, and it serves as a plot device – her inability to hear Arnie entering her apartment helps get her and her partner killed. But you might remember more recently a certain Peter Quill, AKA Starlord, as he kicked off Guardians of the Galaxy by hitting play on a mixtape his mum made for him, ensconced safely in a proper Sony Walkman.

Guardians was a great, funny and smart movie, but the backbone was the music. Starlord’s entire arc was one of processing grief by way of listening to songs that tethered him to his past, and trying to impart his taste in music onto those he cared for around him. His Walkman became a precious link to his home, to his old life. And he went to pretty extreme lengths to get it back.

When I was a kid, there was almost nothing I’d have done to protect it. I never had the original blue 1979 model Peter Quill toted around in Guardians of the Galaxy, but I’d spend weeks on end carefully – and illegally – draining songs from the radio and stitching them together into a painstaking mixtape. I’d record my favourite TV shows, and listen to them as I went to sleep. One time, when I was thirteen and everyone was into Nirvana, I snuck into an HMV and grabbed the cassette single of Tokyo Ghetto Pussy’s Everybody On The Floor, and listened in rapt silence on the bus heading home.

Ever have your tape go weird and spray out gouts of shimmering brown ribbons, then have to respool it with a pencil? Ever paw through the liner notes on a cassette, then have trouble folding them up properly to fit back into the clear plastic case? Ever give someone you had a crush on a mixtape, the sticker on the tape crammed with tiny, fastidious, earnest handwriting? Then you, too, would have felt a pang as you walked past the wall of Walkman’s beneath the exhibit in Ginza. It’s a testament, a monument, to a bygone era. 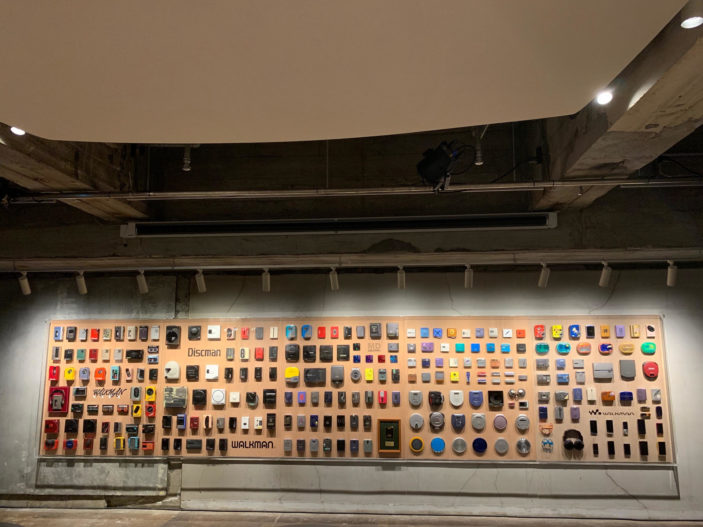 Here’s the thing, though – portable music is more popular than ever, we’re just not using tapes anymore. The legacy of the Walkman is staggering, and this exhibition really drives that home. The Walkman wall, on the lowest level of the exhibition, featured more than 230 devices. Less tech display and more the evolution of man in tech form, I watched as Walkman’s turned slowly into Discman’s, which slowly turned into minidisc players, and then into MP3 players. I’m using a smartphone now, but I’ve still got Sony channelling music into my ears. I guess you could say I’m using a descendant of the Walkman, a super sophisticated great-great-great-great grandkid.

You see, I was also in Tokyo to cover the new noise cancelling wireless WF-1000XM3 earbuds, and by the time the exhibit rolled around I’d been playing with mine for days on end. In fact, as I walked through the Ginza exhibit of ancient Walkman models, the crowd noise around me was sucked away into nothingness, and I wondered idly if Sony had any idea how far they’d come in 40 years. Every time I went to listen to something on one of the display models, I’d carefully pop my earbuds away in their little self-charging travel case, and feel a pang of something. Guilt? Look, Sony, if you come up with a cassette-playing Walkman that will pair with my new WF-1000XM3, I think you’ll have really broken the mould. (Oh, and you can read my full – and glowing – review of the superb new WF-1000XM3 right here).

Other levels of the avant garde, minimalist space allowed me to rest inside large, calming timber ramps and hollows as I listened to various vintage Walkman and discman models, each playing a song from the year they were manufactured. And you know what? It did what the Walkman always did. It took me somewhere.  Suddenly, I was somewhere else.

The Day the Music Walked is now open to the public through September 1, 2019. Find out more on the Ginza Sony Park website.