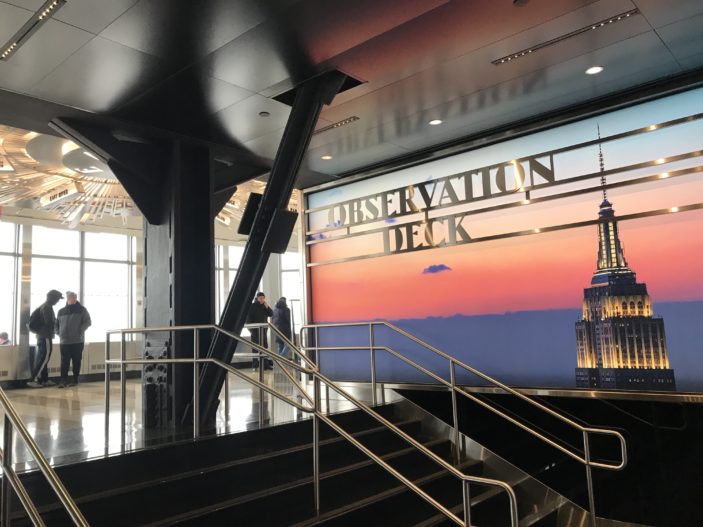 There are a few buildings around the world that everyone and their dog are familiar with; so ingrained in popular culture that we feel like we know it intimately. The Eiffel Tower. The Sydney Opera House. Big Ben. And the Empire State Building. And the truth is, we all know a little bit about all of them beyond the facade.

For the Eiffel Tower, it may be that it was originally built for the 1889 World’s Fair (which, fun fact: attracted more than 32 million visitors). For the Opera House, it might be that it was designed by Danish architect Jørn Utzon, who didn’t have the best relationship with our government. And with Big Ben, I feel the animated version from Peter Pan is as embedded in our memories as the actual building itself; those silhouetted children sitting against that beautiful illuminated clock face.

As for the Empire State, maybe it’s that the Midtown Manhattan Building was constructed in a little over a year – an incredible feat of engineering that marvels even with modern technologies. By the time it was built – with some 3,500 builders working on the project, the 102-story Art Deco skyscraper was the tallest in the city – taking the title from the Chrysler Building, who held it for just 11 months. They would then hold it for some 40 years. And that’s not by coincidence – the two buildings were very much in a “Race into the Sky”, as it was dubbed. And if American history has taught us anything, it’s that there’s nothing like a race for the country to pull off engineering marvels. 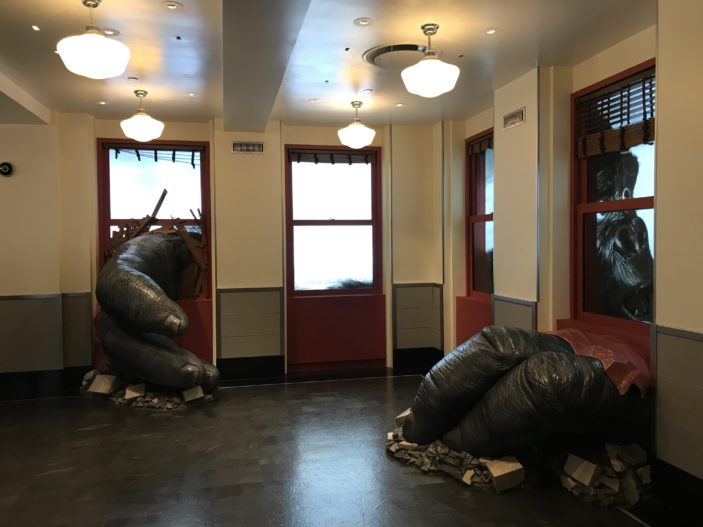 That iconic moment is captured as part of a new immersive experience at the “Story of an Icon” Museum, which opened last year and sees guests – as they make their way up to the building’s iconic, recently re-imagined Observation Deck – learn about the incredible construction of the hotel, in a mix of built in set pieces, videos that seem to surround the room entirely, and interactive installations. 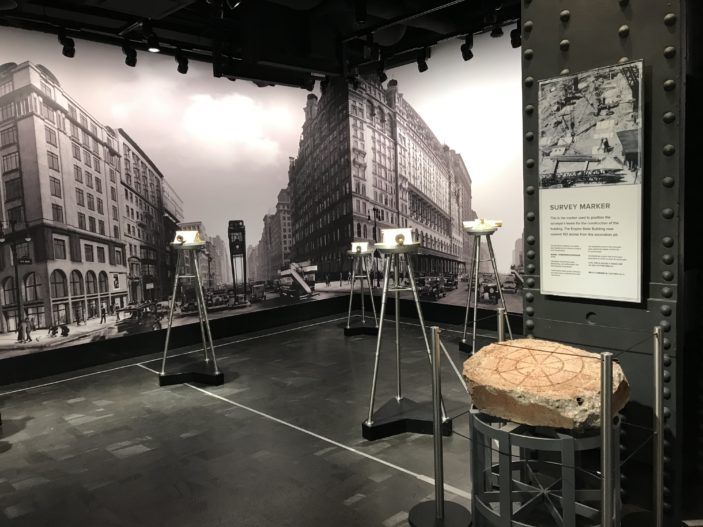 Why not take a look in these surveyor’s tripods, sitting next to one of the original survey markers from the construction of the Empire State Building? You might be surprised by what you see when you look inside… 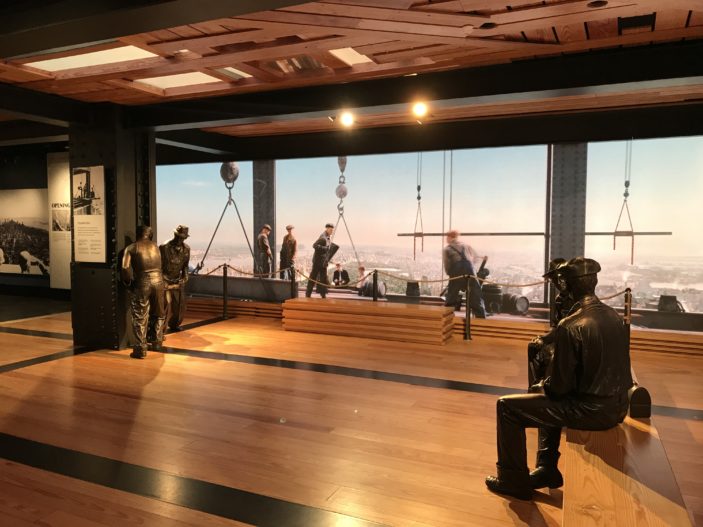 Or you might want to sit with the workers as you watch them construct the building around you; sounds included.

There’s lots of information to digest alongside the impressive, immersive multimedia experiences, and captions are in no less than 9 languages. The design of the museum is meant to take you back to what it was like when it was being built, and first opened. It celebrates the marvel of it all, and places it in the context of Manhattan in the 1930s. One of my favourite parts of the exhibit is the Otis elevator display showing what it was like when it opened – with impressive detail for how it worked.

And it’s when you go up those elevators – of course utilising systems far more advanced than when it first opened – that you get to enjoy the most recent addition to the Empire State Building experience. 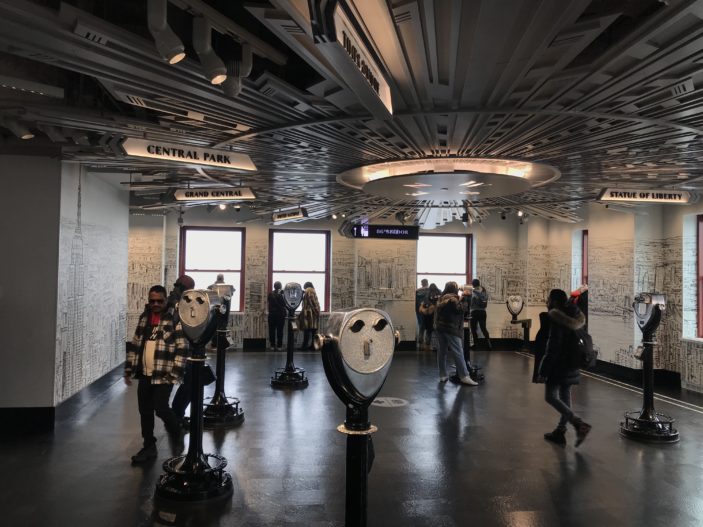 The brand new 80th floor (pictured above) is something of a loading zone for the building’s observation decks with a number of interactive attractions of its own, including viewfinders complete with the sights and sounds of the surrounding city, and information kiosks that help you plan your New York adventure, courtesy of NYC & Company.

Long boarded up, the floor opened in November and brought to an end a four year, $165 million redevelopment of the tourist side of the building, that started in August 2018 with the opening of the brand new lobby for tourists; finally bringing to an end the long standing joint entrance for both office workers and guests. Though that stunning entrance will still be part of your journey here – you just leave through it now (and the gift shop, naturally). 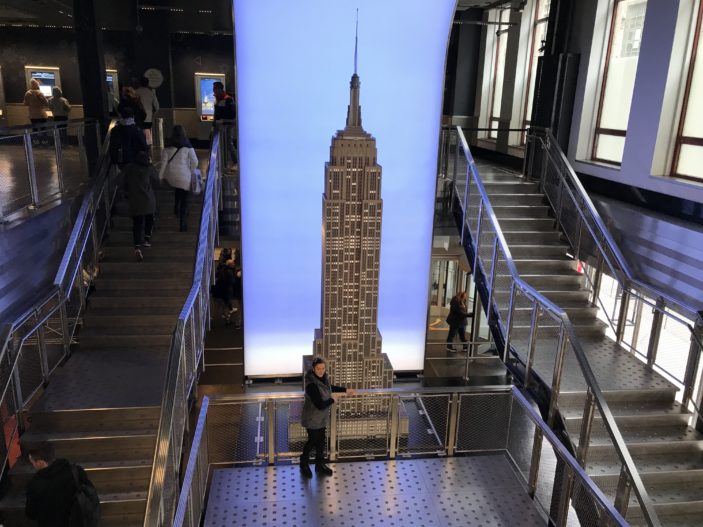 The new lobby brings with it a direct entrance to ticketing, and the museum, which sits on the second floor. There’s also a marvelous scale replica of the building, with the lighting reflecting and matching the real lighting in the building at the time – even down to the “Sparkle Light Show” that happens on the exterior of the building, on the hour between 5pm and 2am. 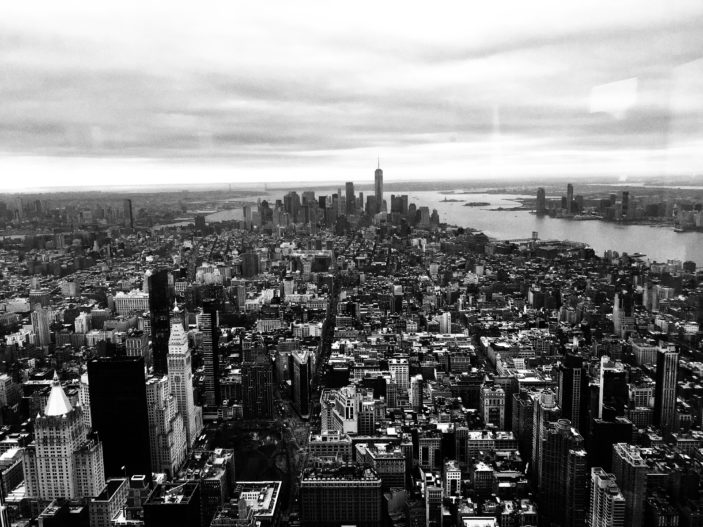 What makes this remarkable is the level of detail given to amplifying the art deco of the building, in every beautiful addition to the room. You’ll spend a lot of time admiring the rosettes on the roof – which have been built into both floors 80 and the 86 Observation Deck, pointing your gaze to the magnificent city that surrounds you. For fans of this period of architecture, this is truly a love letter to everything about the era – yes, even their old rivals… 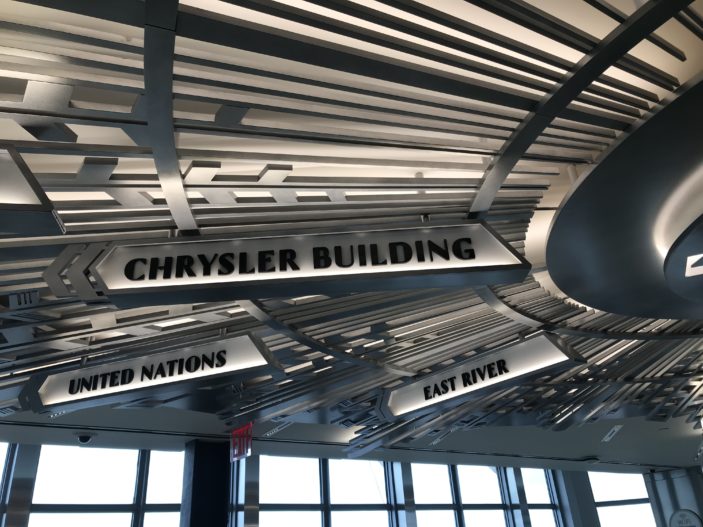 And though they’ve added heaters to the deck for the first time in its history, the experience on the outdoor balcony otherwise remains exactly the same; free binoculars (these ones being fully functional), providing you with an awe inspiring view of one of the most loved cities in the world, from atop its most well known building. And yes, it’s just as cold and windy as you expect it to be in the middle of Winter (as mild as it has been in 2020). 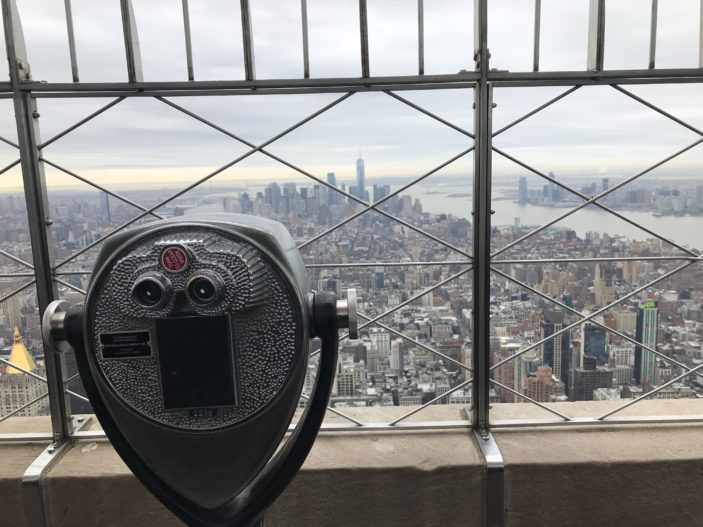 Once you’re finished in the Observation Deck, for an extra fee (around $20), you can head up a glass elevator (hello, Willy Wonka) from the 86th floor to the 102nd, capturing an even higher, more unique view. This is a historically cramped space they’ve managed to open up further thanks to massive, floor to ceiling windows, offering 360 degree views above the skyline of the city. And though the rosettes aren’t replicated here, you do have some incredible art deco designs printed into the marble floor.

I mentioned at the start of this article that we all feel like we know this building. I felt like I knew it so well that I was sure I’d visited it before. It turned out though that this experience was my first in the iconic structure. Well, one part of the museum experience might just remind you why I might have thought this was the case. Towards the end of your time on level two, you’re greeted to a video wall, with no less than 70 screens covered with the sights and sounds from the hundreds of appearances the building has made in popular culture: films, games and TV. This is a building that has existed in our peripheral vision for our whole lives. And now the experience is unlike any other “observation deck” in the world. 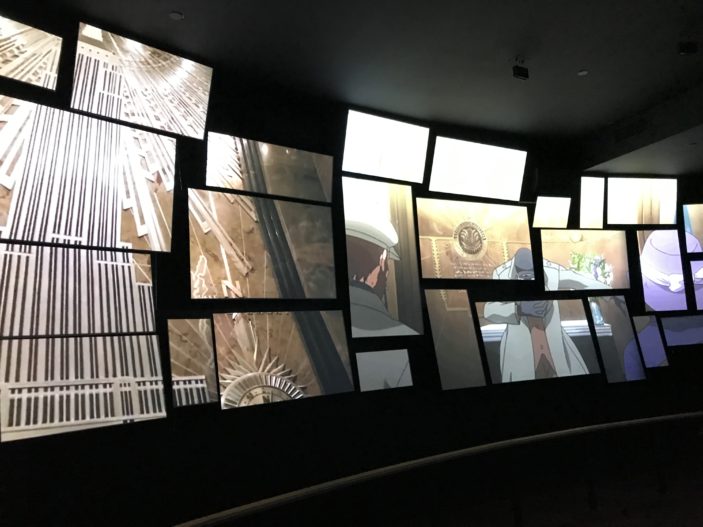 Whether you’ve visited the Empire State Building before or not, the experience they’ve set up for you in 2020 ensures it will feel like you’re seeing it the first time. From the incredible craftsmanship on the upgraded Observation Decks, to the detail in the museum, by the time you get to actually look out at the view, that part of the experience feels like a bonus – rather than the reason you’re there in the first place (which, of course, historically you would have been).

With the whole experience open from 8am to 2am (the last elevator goes up at 1.15am), 7 days a week, repeat visits are encouraged to take it all in. And with 10,000 square feet dedicated to the museum alone, let alone the new experiences that await you on the upper floors, there is a lot to take in. And the icing on the cake is you get to see that view with a wide variety of lighting options – daylight, sunsets, nighttime and even sunrises at certain times of the year.

There’s no better place to watch the world go by, and to get that perfect picture of the iconic city that never sleeps – from a building that never does either.

You can visit the Empire State Building with a valid CityPASS, head HERE for more details. The CityPASS gives you access to 6 New York City destinations, saving 42% on admission. For more details about the ESB itself, visit their official website. The building is located at 20 W 34th St, New York, NY 10001, United States.

The author visited as a guest of the Empire State Building and CityPASS. Photos by the author except where mentioned.