I’m watching European countryside scenery roll by from my bed, and my phone won’t stop buzzing. Picture messages, texts, oh, and the odd GIF – they’re all coming through in the WhatsApp group I’m in. It’s called The A – the same name of the river cruise ship I’m on.

Run by U by Uniworld, Uniworld’s new off-shoot brand, the ship set sail from Regensburg, Germany a few days ago. For a total of eight days, we’re winding our way along the river Danube, dropping by tiny European towns and big cities, before wrapping up in Budapest, Hungary.

Launched late last year, U By Uniworld aims to introduce a younger, more adventure-seeking crowd to the world of river cruising. It’s doing so with quirks like this WhatsApp group, used for the guides, or rather ‘U Hosts’ as they’re called, to send daily itineraries and updates, and, as I was now experiencing, for its guests to chat and share snaps. 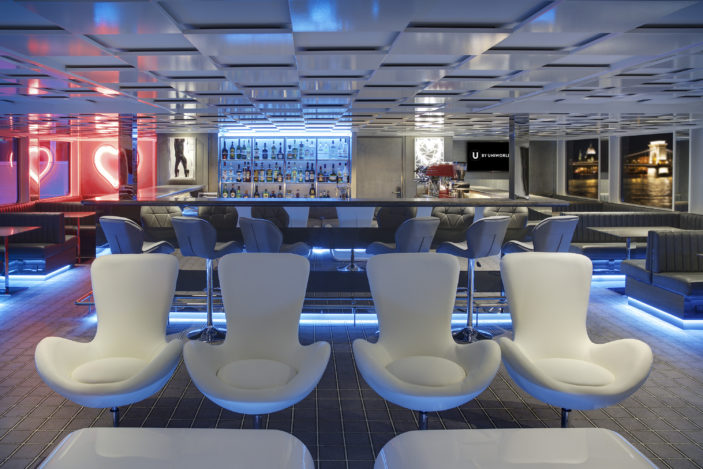 It also does so with its on-board activities like a Sexy Saxophone Sailaway party and a Fussball tournament; and with its sleek and sophisticated ships featuring black-and-white colour schemes and touches of pop art.

Room types on The A, the sister ship to U By Uniworld’s The B, range from studio and balcony bedrooms to spacious suites – only four of them – with beds directly facing the balcony. I’m staying in a balcony bedroom with the bed positioned to the side of it. At night I’ve been leaving its sliding doors open and waking to views of fairytale villages and verdant valleys. 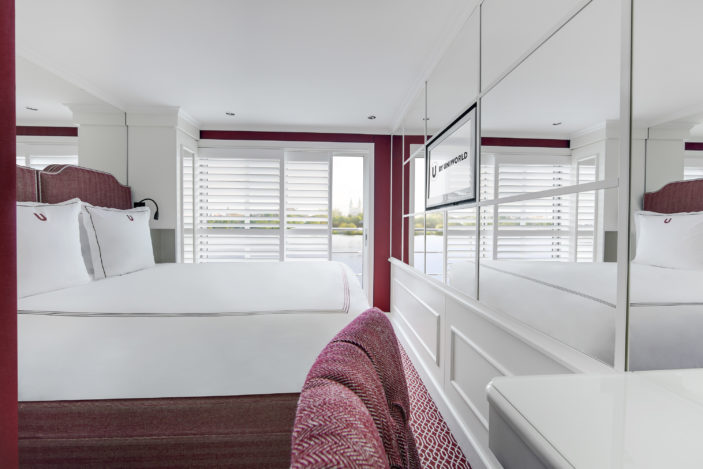 I’m sharing the room with a friend, making it cosy, yet still comfortable. At the first day briefing, when we had our first look at the 60-or-so passengers we’d be sharing this journey with (the ship can fit up to 120), we were told to fully unpack and store our suitcases under our beds. It was good advice – reaching for clothes from a closet has certainly made the room feel much homier.

The friends I’m making on the cruise has helped to do that too. While U By Uniworld was originally launched to travellers aged 21 to 45, it did away with its age restrictions in March. This trip, passengers are a mixed bag. There are couples in their 30s all the way to 60s, groups of friends, a mother-daughter combo and a handful of solo travellers. Though there are a few Australians, it’s surprisingly mostly American. 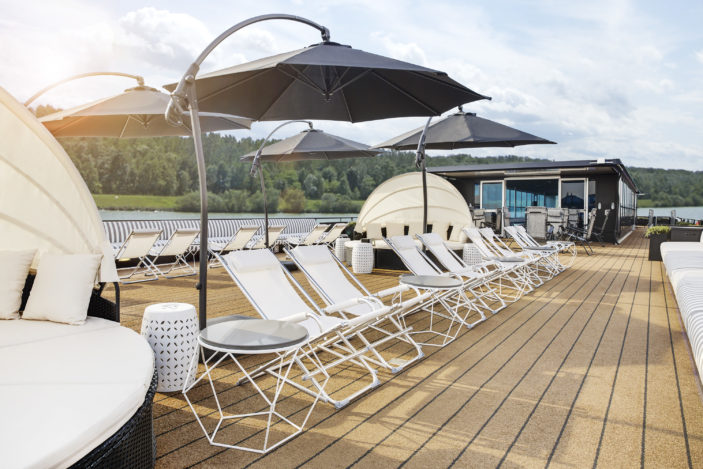 In the mornings, I wake early for a group exercise class on the rooftop led by René, the ship’s all-rounder – he’s also an excursion leader, resident masseuse and drum teacher – before hitting the brunch buffet. It’s a good mix of healthy and unhealthy, and I feast on both as the picturesque panoramas drift by. 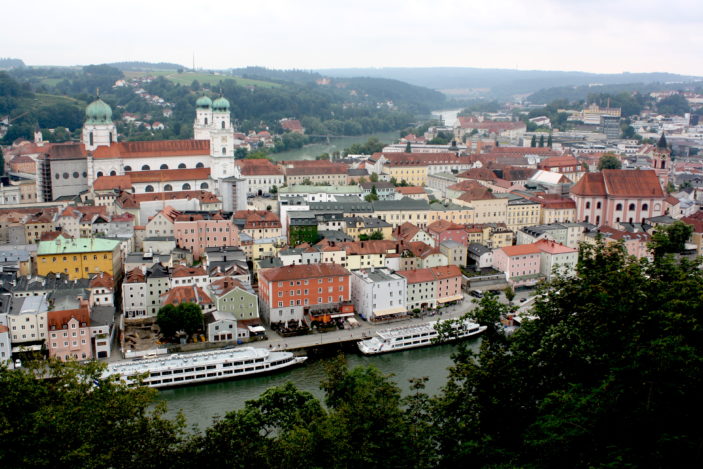 Dinner is sometimes buffet, other times a set menu. The chef’s been told I’m a vegetarian so I’m spoilt for choice with specially-prepared dishes. I’ve been taking advantage of my add-on drinks package by ordering a cocktail of the day or glass of Uniworld’s own brand wine on most occasions. 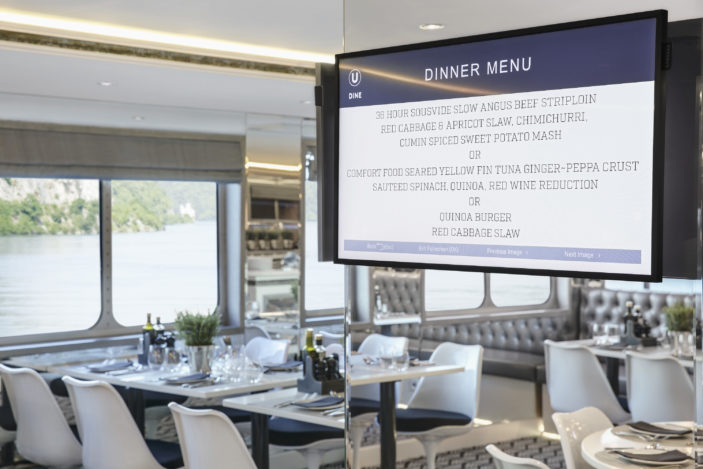 Afternoons and evenings have varied. There are on-board activities like a wine talk, beer mixology class and a silent disco. I only realise halfway that the headset we were given at the start has automated GPS commentary I can listen to from the rooftop. One afternoon, I join a group gathered at the front, curl into a lounge chair and listen. The commentary is witty and informative, and I get a lesson in Riesling and Zwigeld grapes as we coast along their vineyards. 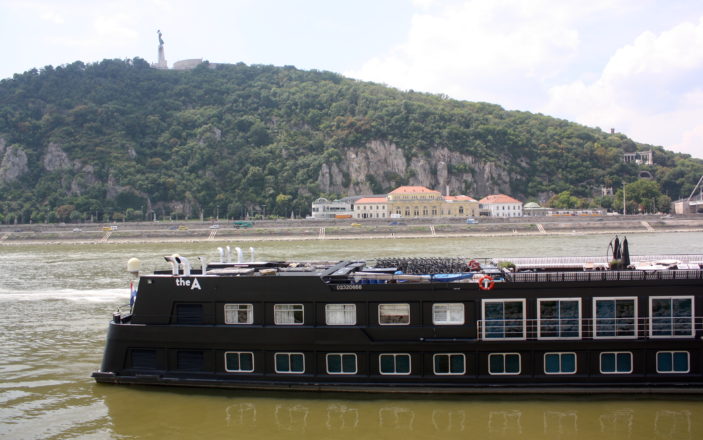 And, when the ship is docked, there are as many guided tours – some included, others an extra cost – and paid excursions as I’d like. A highlight is an after-hours night-time tour I do of Vienna’s beautiful baroque Schonbrunn Palace, a tour seemingly exclusive to U By Uniworld’s passengers. 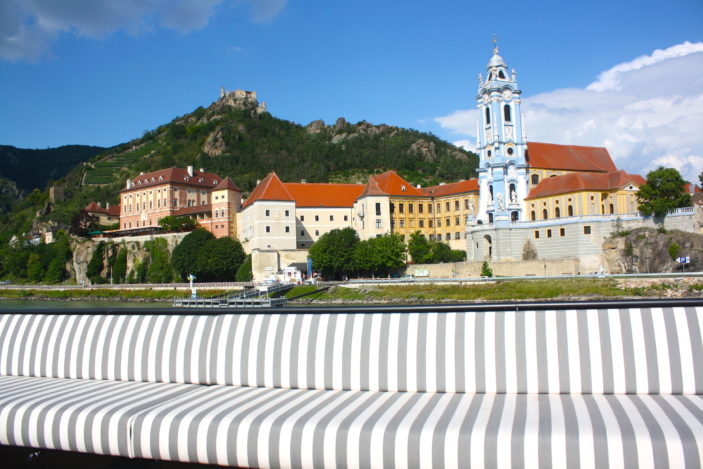 Unfortunately, Germany’s hot summer has made the Danube’s water levels so low that on this particular week I’m cruising, we’re stuck for a day and half longer than expected in the small town of Straubing. Staff updated us on the situation throughout, but sadly the itinerary has been shifted and we’re missing seeing Bratislava.

While some are disappointed, I’m unfazed. When travelling, things never fully go to plan. Most don’t seem to have minded much either. On the last night in Budapest, the WhatsApp group is flooded with messages of thanks. It feels sad to say good-bye. I’ll miss the people, the routine and, of course, the meals. The WhatsApp updates, I could take or leave. 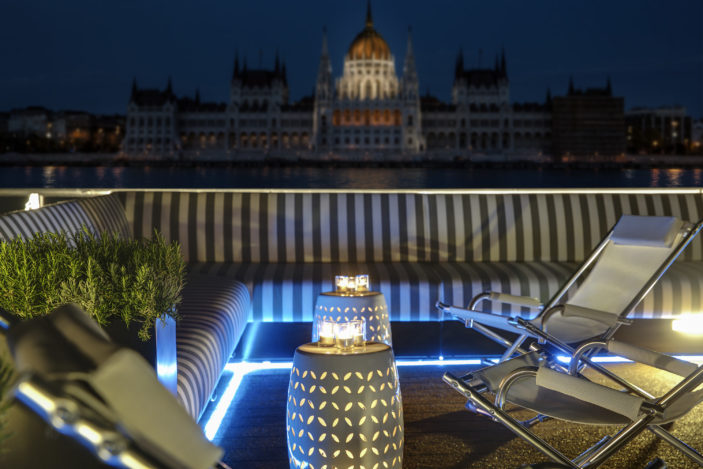 The writer was a guest of U By Uniworld on their Danube Flow route.