Disneyland Hong Kong is the iconic brand’s second home in Asia, after launching its Tokyo location back in 1983. It’s also the Disney Theme Park that’s geographically closest to Australia – and with the park originally opening in September 2005, that means that this year they will be celebrating their 10th Birthday!

I had the chance to head along to check out the park for the first time back in December, while their Christmas celebration was in full swing. Like at all Disneyland resorts around the world, the park was covered in Christmas decorations, though the rides themselves remained unchanged. We were also able to experience a “Christmas Tree Painting” just before the venue closed its gates, on Main Street U.S.A., while fake snow fell from above and fireworks shot into the sky. A slight dose of rain seemed to dilute the effect, but it was still a fun one – especially for the kids*.

Since 2011, the Hong Kong location has been enjoying the largest expansion of any of the Disneyland theme parks around the world, with not one but THREE sections of the park added to the exterior of the original launch grounds – all of which are essentially exclusive to the Hong Kong Park, albeit by names alone for two of the three. 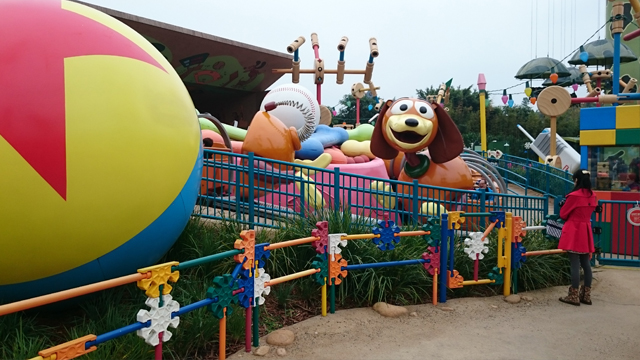 The first is Toy Story Land, which launched back in 2011, modelled after Toy Story Playland found at Paris’ Walt Disney Studios, along with its three rides: the RC Racer, the Slinky Dog Spin and the Toy Soldiers Parachute Drop. The orange wedge-like RC Racer is the centrepoint of the area and surprisingly one of the best rides in the whole park. It sets off like a miniature Tower of Terror at Dreamworld (Gold Coast, Australia) or Superman The Escape (Six Flags Magic Mountain, California), before shooting you backwards to do it all over again – taking you faster and higher, backwards and forwards, while you sit inside a replica RC Racer from the popular film series. Even as someone who rides a lot of rollercoasters – it’s a lot of fun for a “family friendly” attraction. I must have run on that about five times in row.

But Disneyland isn’t just about the “thrill” rides, it’s about the experience; it’s about letting you experience the “magic of Disney” in a unique way. This leads us to the two other new additions to the area: Mystic Point, with its “Garden of Wonders” that create optical illusions with a range of permanent “art installations”. They encourage you to take photos and experience the works from the exact point of perfection. The main attraction within this area is Mystic Manor, which is something of a cross between Indiana Jones and Haunted Mansion from the original Los Angeles Theme Park, setting you off on a Magnetic Track and a journey through something of a museum of antiquities. The technology behind this ride is hands down the best I’ve seen yet in a Disney ride, and as far as I know, the ride is exclusive to the park – though similar attractions can be found at its other locations. A ride suitable for the whole family. 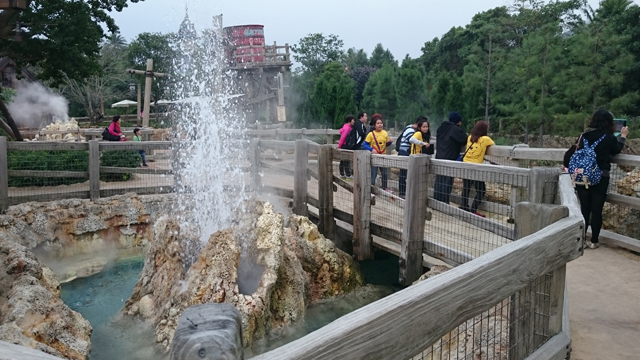 Then there’s Grizzly Gulch, their equivalent (and a very small one at that) of Disneyland Califonia’s Frontierland, with all the detail you expect, from fake horse prints and carriage marks in the country area to exploding geysers that invite the young ones to get a little wet. The “Big Grizzly Mountain Runaway Mine Cars” ride is surprisingly fun, starting off pretty slow and unassuming before throwing you backwards and then putting you in the middle of a mine shaft explosion. Definitely an upgrade from the original Big Thunder Mountain in Los Angeles.

Moving into Adventureland, and we have a few similar sights – Tarzan’s Treehouse, which is postioned in the middle of their Jungle River Cruise, another Disneyland tradition with its animatronic jungle creatures. The Festival of the Lion King is one of the bigger “shows” at the park, held in a 360 degree large space, almost reminiscent of a Cirque Du Soleil tent. Mainly in English with a bit of Cantonese and Mandarin, the 30 Minute production certainly is no Broadway production, but it’s certainly somethings the kids are going to love, giving singalongs to all their favourite Lion King songs. 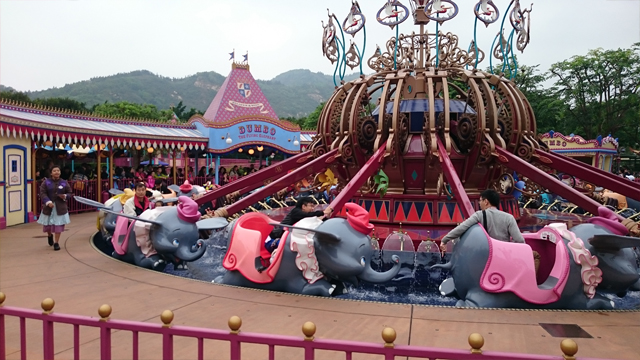 Of course, it’s not all about the new features – Disneyland wouldn’t be complete without some of its most beloved attractions. Yes, the Mad Hatter Tea Cups are here, as is the iconic Dumbo ride in Fantasyland and the world uniting It’s a Small World. I didn’t line up for it in my visit to the park this time around, but given its general approach, once can only imagine it’s about the same as what you experience at Disneylands elsewhere – and there’s nothing wrong with that. And of course, there’s Main Street U.S.A., which serves as your picturesque entry to the park, with Sleeping Beauty’s Castle in the distance. As someone who was lucky enough to go to Disneyland quite a few times as a kid in Los Angeles, there’s something incredibly nostalgic about walking into the park, even in its bizzaro Hong Kong incarnation. 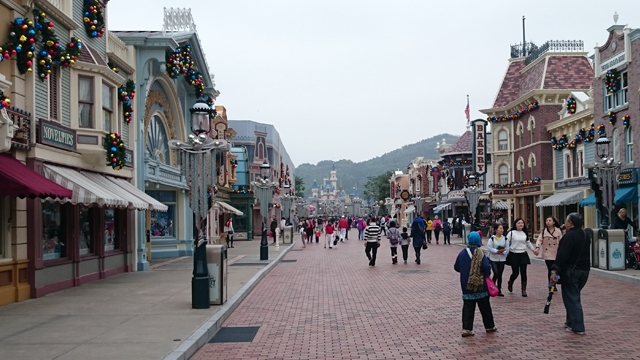 One thing worth noting about Disneyland Hong Kong is that its food selections are impressive. Not to discount the food selections at other Disneyland Parks, but outside of their more expensive restaurants, you’re not likely to find a great meal while you’re there. However, standard meals include things like a Smoked Duck Leg with Rice, or the BBQ Pork, pictured below. Glazed with maltose syrup and served with a drink and picked vegetables, it will keep the locals happy and ensure all tourists have a decent meal. In Hong Kong they couldn’t get away with any less. Though at HK$95 (about AU$16) for the combo, it’s certainly more expensive that you’ll find in a local Hong Kong Cafe. But we wouldn’t expect any less. 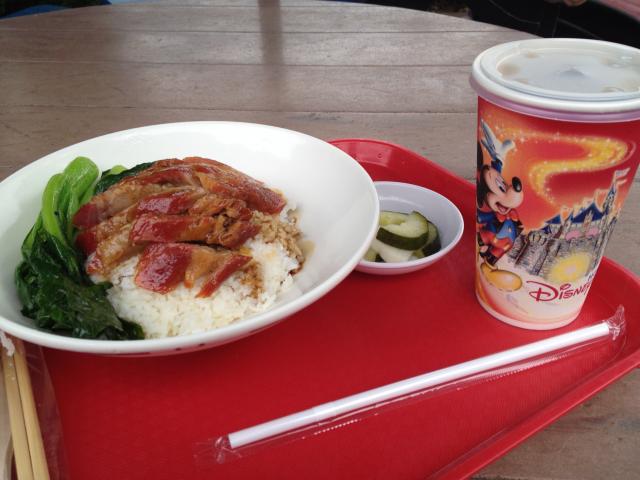 Getting to Disneyland Hong Kong

Getting to Disneyland via public transport is easy, and the train is really your only option. From Mong Kok station I had to change twice but it was no more than a 40 minute journey. Don’t judge Google Maps for the time of your journey… it’s always MUCH less than described. From there you head to the Sunny Bay train station. There was something about that station that felt like it was straight out of Jurassic Park… like, if you were to access Jurassic Park by train, this is where you’d wait. Take with that what you will. From there it takes no more than 7 minutes. The cost on the Octopus card from Mong Kok to Disneyland was HK$19 (About AU$3), which is pretty affordable for a theme park transportation system. And the ride on the Mickey themed trains is worth the cost alone… 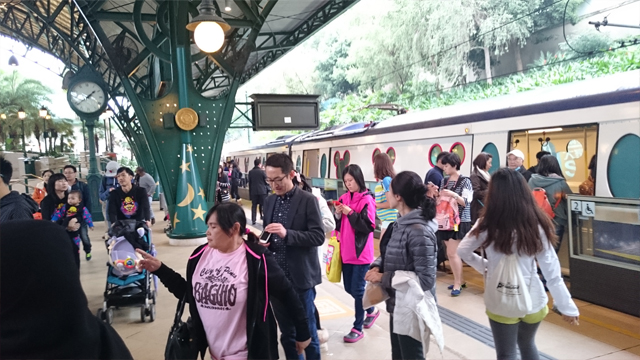 Entry to the park is HK$499 (about AU$75), though there seem to be cheaper options online.

Unlike some foreign theme parks from Disney – Paris being a key example here – the rides are almost entirely in English. Some safety instructions are naturally provided in different languages, but any story elements for the rides are in English. The “River Cruise” is available in three languages, separated into three queues, though they promise a 15 minute wait for all. The shows such as Festival of the Lion King, however, do feature some elements of Cantonese and Mandarin within them, though it didn’t seem to get in the way of understanding anything that was happening. 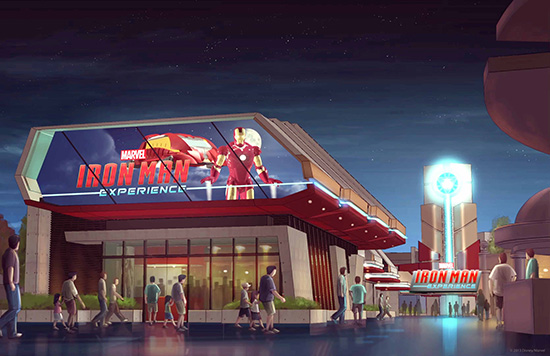 Interestingly, the Hong Kong branch of Disneyland will be home to the first Marvel focused ride at their theme parks. In Tomorrowland, works are very much underway for a new Iron Man ride that will serve as the park’s equivalent to Star Tours – the popular Star Wars motion ride at their other theme parks. With Mystic Point’s Mystic Manor, this marks two consecutive major ride openings for Hong Kong that are as yet exclusive to the park. While the ride is being built, the “Fast Pass Entry” for the popular Buzz Lightyear ride Astro Blasters has been closed. The only “Fast Pass” Entries in the park are for Space Mountain and The Many Adventures of Winnie The Pooh. For those unaware, the “Fast Pass” is a Disneyland feature that lets you print our queue skipping tickets for the most popular rides, if you’re willing to return an hour or so later. Space Mountain, for those curious, is an almost exact replica of the Los Angeles version, which makes it fantastic. Always been one of my favourites…

There’s something about being in America – especially in its original location – that gives Disneyland its magic and charm. Anywhere else will always feel like you’re just getting a taste… an emulation of the real thing. But all said and done, there’s plenty to love about Hong Kong Disneyland. It’s notably closer to Australia, cheaper to get to and attend, and some of the attractions (absent from most other parks) are worth the admission ticket alone. It was a great day spent and I’ll certainly be back.

For more details head to: https://www.hongkongdisneyland.com/

*I revert to being a five year old when at Disneyland, so I count myself amongst them.

The author covered all costs for this trip.