The Oregon (Coast) Trail: Navigating the dream itinerary for the world’s finest roadtrip 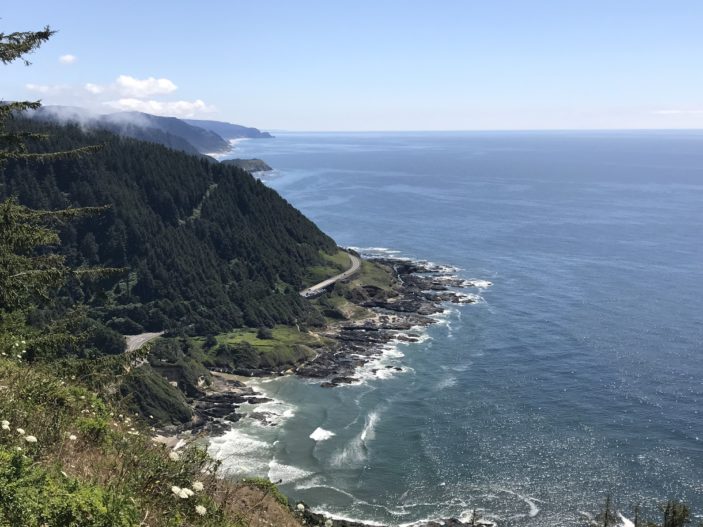 It’s summer 2019. The weather is perfect. The window is down and I am cruising down the Pacific Coast Highway. It’s my first time on this section of the highway, taking me from the south of the US state of Oregon, up to the capital in Portland. It’s by no means the only way to traverse the state, but it’s certainly the most beautiful.

Lucky enough to grow up between two coastal cities; one in Sydney and the other in Southern California, I’ve been spoilt by coastal drives my whole life. So it takes a lot to impress me. But really this is emblematic of the entire West Coast of North America; from the sands of San Diego, to the mountains of Whistler in Canada. The way the rock meets the ocean, and the way we have twisted and turned one of the countries’ most iconic highways against it is nothing short of breathtaking – the odd rock & mudslide not withstanding.

From The Beatles to INXS, the splendour of the American West Coast has inspired entire generations of musicians to migrate to this part of the world, or inspire those already living here. Take Portland’s Fruit Bats, whose song “Humbug Mountain Song” is in name and spirit about the very road I was driving along – and the terrain that envelops it.

There’s something intrinsically human about wanting to capture a place, a feeling, a moment in a song. As I listened to the track while passing its namesake – a mountain and state park just north of Gold Beach – somehow it felt they had done just that, amplifying my own experience while bringing clarity to their own.

But listen to any song, watch any movie, scroll every photo or read anything (including this article) – nothing compares to the real thing. To incorrectly borrow words from one iconic movie: you have to see it for yourself.

Just as you’d pass through Santa Barbara, Carmel and Big Sur between Santa Monica and San Francisco, the drive up the Oregon Coast doesn’t just come with the views – it’s filled with bustling communities that serve great food, brew delicious beer and offer unique experiences that will suit both the laziest and most adrenaline seeking travellers. 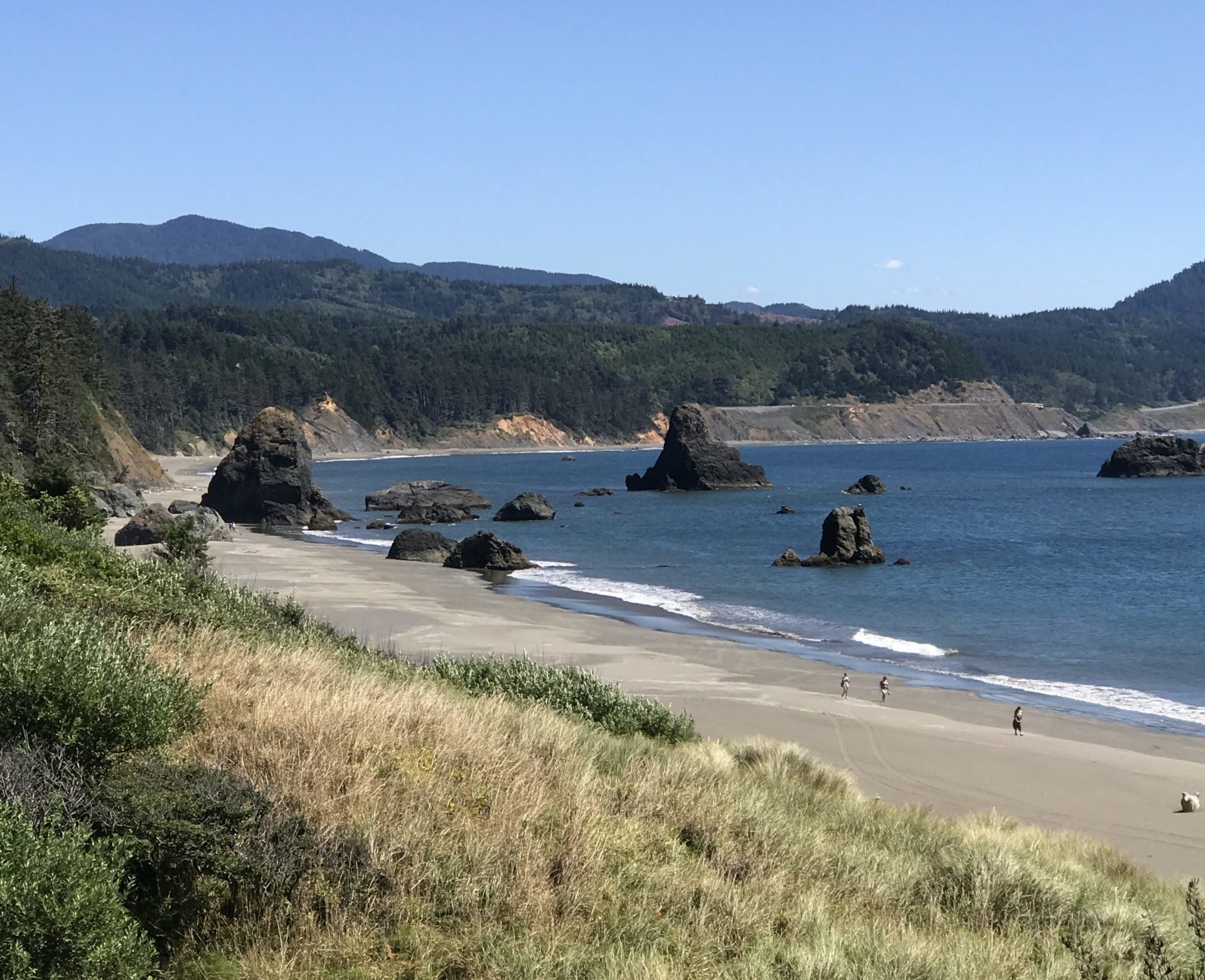 I started about 40 minutes north of the Californian border on Gold Beach. It served as my first night’s accommodation, as well as the entry point for some of the most exciting outdoor activities you’ll find in the region.

Amongst their many offerings, South Coast Tours offer kayak expeditions along the rapids of Rogue River, just outside of Gold Beach.

Starting at Agness Park, you make your way between a wilderness area and Copper Canyon, passing through a variety of rapids and calmer terrain – all on your very own inflatable kayak. If it sounds terrifying to you, you’re not alone – while I love to kayak, this was definitely taking it to another level, and the fear was real. But with a great guide, and a lovely group of fellow riders, once we got through the first set of rapids, the comfort levels rose – as did the adrenaline – and it was one of the most joyous and exhilarating experiences of my life. 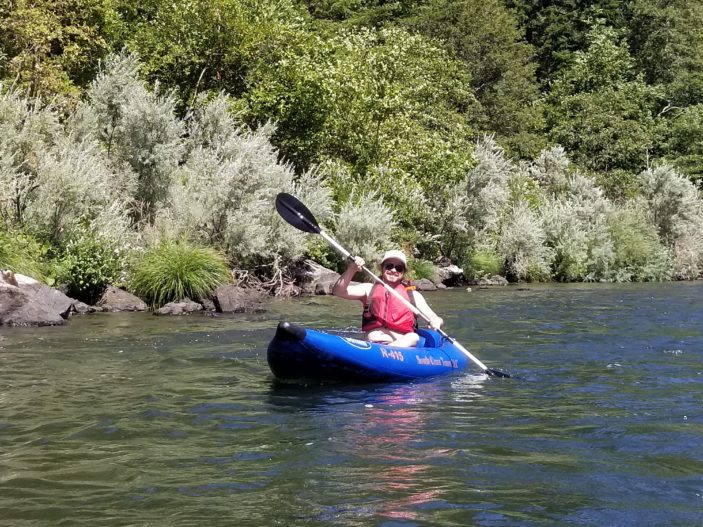 This is far from the only place to engage in such activities in the region – with 5 other “wild and scenic” rivers in a 60 mile radius (including the Elk, Illinois and North Fork Smith), this area has the highest concentration of such rivers in the world. It’s why it’s often referred to as the Wild Rivers Coast. 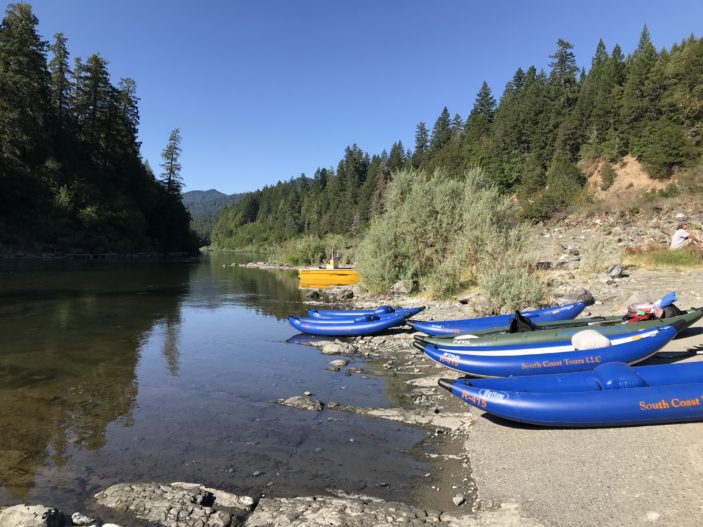 At the end of the thrilling expedition, we enjoyed a meal at the Cougar Lane Lodge in Agness, where I devoured a salmon burger and some fantastic iced tea (you may spot it brewing in the sun as you walk in). Here, you can also get lots of BBQ and tacos, and enjoy some local beers, such as the delectable Arch Rock Pale Ale.

Plenty will spend the night in one of the river lodges or affordable accommodation options in the area, though I headed back to Gold Beach and spent the night at the Pacific Reef Hotel, who offer nightly light shows and movies on a large screen constructed on their back lawn, ocean views, and impressively comfortable beds.

I continued north the next day, towards Bandon, Oregon.

About an hour from Gold Beach, the city is a popular surfing spot, and is within easy reach of the Whiskey Run Mountain Bike Trails and the Bandon Dunes Golf Resort, which I’m told is a bucket list course amongst golfers. And sitting alongside the point at which the Coquille River meets the Pacific – accompanied by one of the Oregon Coast’s 11 lighthouses – this is unsurprisingly a great spot for seafood. 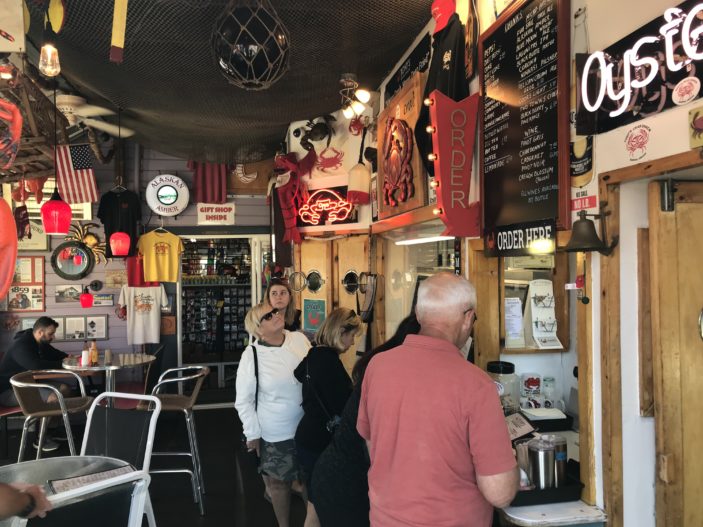 Tony’s Crab Shack (pictured above) and the neighbouring Bandon Fish Market are two of the most popular spots, but even the local brewery and pizza spot – Bandon Brewing Company – offers some seafood options, depending on the season, and if you spot the Crab & Pesto pizza on the menu, you should definitely give it a try, alongside some of their delicious beer. 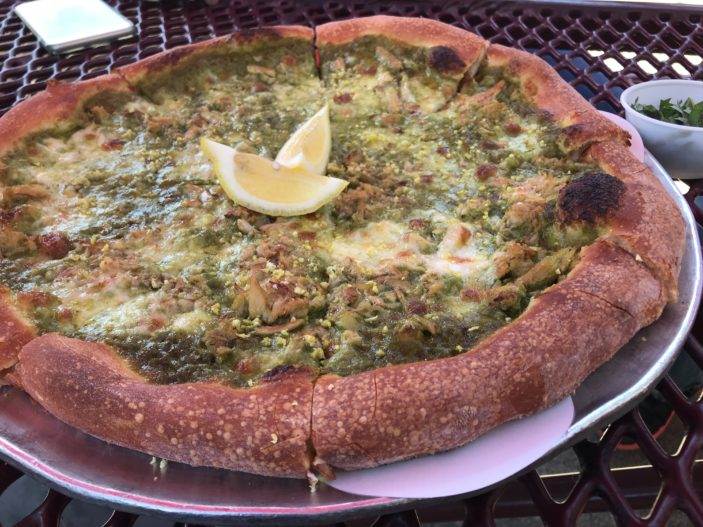 After you’re full of seafood, you can travel 30 minutes north to find North Bend, which is ironically almost 400kms southwest from Bend, Oregon – I don’t make the rules. There’s a small airport here you can fly into, and it sits right next to Coos Bay.

Here, I spent the night at Bay Point Landing, one of the many unique accommodation options that you’ll find in Oregon. The “modern cabin” rooms, such as the one below, are in self-contained, detachable units set across the property. They also offer airstreams, provide space for RV camping and have a pool and fitness centre. If you’re camping on the coast, this would serve as a must-stop spot on your journey. 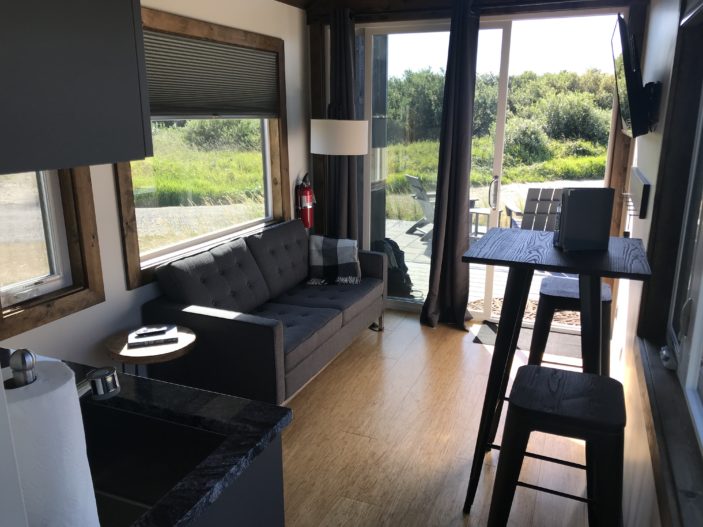 There’s lots to see and do around Coos Bay – but a visit to the 7 Devils Brewing Company is a must. And you don’t have to head too far north before you come across massive sand dunes – there are a number of them in the Oregon Dunes Natural Recreation Area. But this is an adventure I would save for the final day.

As you hit Dunes City (the actual name of the heart of the recreation area), a little less than an hour north of Coos Bay, plenty seem to bring their own buggies and vehicles to traverse the massive sand dunes. Though a number of companies (including Sand Dunes Frontier, who I rode with) offer you the experience of renting your own buggy, or donning goggles and racing around the seemingly endless landscape in a group ATV. It’s like something out of Mad Max, a lot of fun, and unlike the kayak adventure, here you leave the hard work to the driver. Not that getting hit in the face with sand is easy work for anyone, mind you. 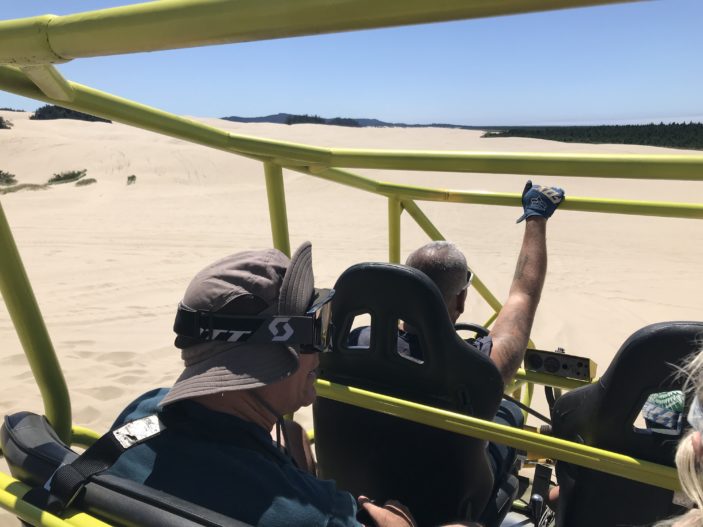 From the adventure on the dunes, I passed some absolutely stunning coastline, and more of the lighthouses that sit alongside it.

The Heceta Head Lighthouse is one of the most famous of them, and is about 80 minutes north of Coos Bay, past Florence, 20 minutes before you hit Yachats. The lighthouse, which is supposedly haunted, offers B&B accommodation, and also sits right near Sea Lion Caves and a number of beautiful vantage points.

This stretch, from the lighthouse to Yachats, contains some of the most beautiful coastline you’ll find in this part of the world. Cape Perpetua Lookout, pictured in the headline image of this article, provides incredible views. Located 5 minutes south of Yachats, it sits above the “Devil’s Churn” inlet, which makes for some amazing water effects at certain times of the year, especially winter. If you’d rather a closer look, there is a staircase down to Devin’s Churn, and you can even get splashed 30 feet up. But the day I went it was a perfectly still day in the best part of summer, so it didn’t have quite the effect.

For the final night of my journey, I stayed in Yachats at the Overleaf Lodge and Spa, which sits right on the water and offers beautiful views, breakfast (starting at 7.30am), free laundry and comfortable amenities. I for one loved sitting on my balcony, staring out at the Pacific Ocean with a Rogue beer in hand, after a beautiful dinner at the Ona Restaurant & Lounge nearby; which itself enjoys river views and incredible seafood. 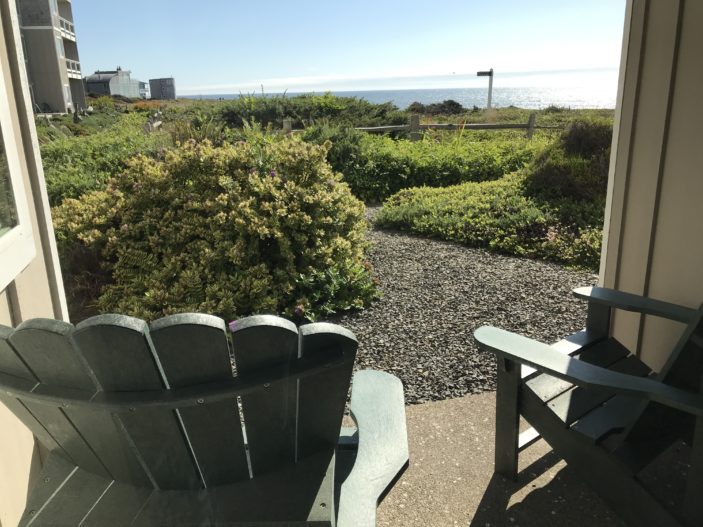 Making a move the final morning towards Portland, I stopped by the Hilltop Cafe-Bistro in Waldport, about 10 minutes north of Yachats. The spot usually closes around 2pm, so don’t delay for lunch here – and it’s worth the trip. I couldn’t help myself and enjoyed one more dose of seafood here, this time in the form of a Dungeness Crab Melt; with garlic toasted sourdough bread, mozzarella and parmesan cheese, broiled and topped with house tartar and served with coleslaw. I know we haven’t talked too much about the food in the region in this piece, but rest assured – there is no shortage of incredible food on the coast. 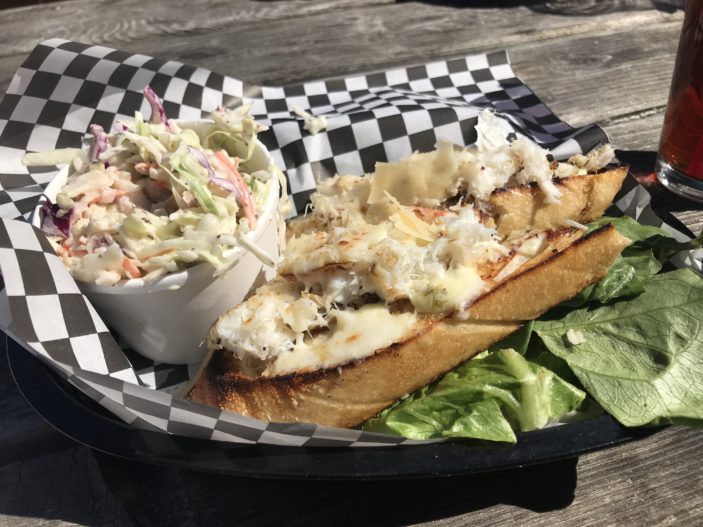 Travel another twenty minutes north, and you’ll find Newport, a huge fishing town which has a number of tourist attractions, including a Ripley’s World of Adventure, the Oregon Coast Aquarium and the Newport Discovery Zoo. It’s also where Rogue Brewing – one of my favourite breweries of the region – is based. And the city serves as one of the last major spots before you head inland towards Salem and Portland.

From here, it’s still an almost two and a half hour drive to the State’s capital, and after all that eating, adventuring and driving across the 3 nights making my way across the Oregon Coast, it feels like the only thing left to do is to shop. Go to the iconic Powell’s Bookstore – the largest independent bookstore in North America. Get yourself fitted with some of Portland’s signature Danner Boots. And try some of the incredible teas at Steven Smith Teamaker. But of course that barely scratches the surface of the great city; can also get a taste of the local music scene, and consider some of these other activities, too. But we’ll point you to the other linked articles for that.

Whether you’re tasting local beers and seafood, racing across the sand dunes or kayaking in the river rapids, the Oregon Coast offers something for everyone. Of course you could drive it all in one day, but where’s the fun in that? Take the time to take it all in. After all, it’s the views that stick with you; standing out over rock and ocean, feeling the mist of the Pacific as you gaze out, feeling oh-so-small amongst the majesty of it all. 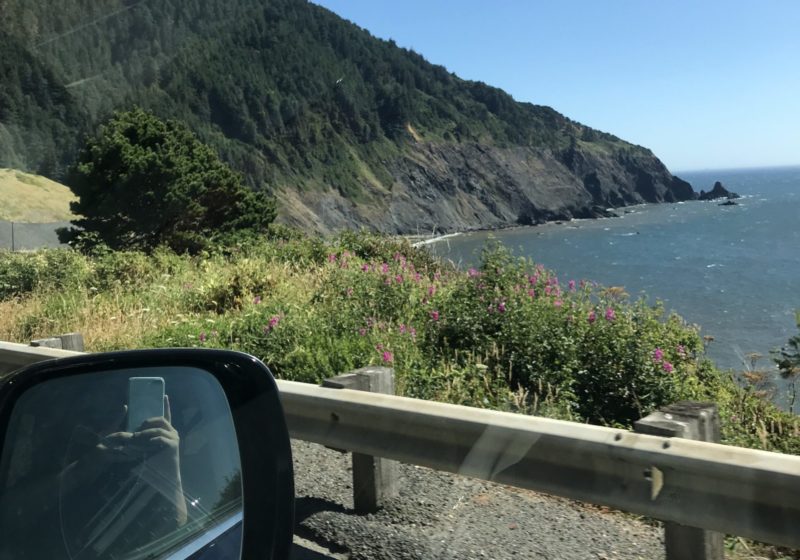 There are regular flights out of Australia to Los Angeles (LAX) and San Francisco (SFO), from where you can fly to Portland and drive down, or North Bend and arrive in the middle of all the action. You can also fly via Honolulu with Hawaiian Airlines for a direct flight to Portland. 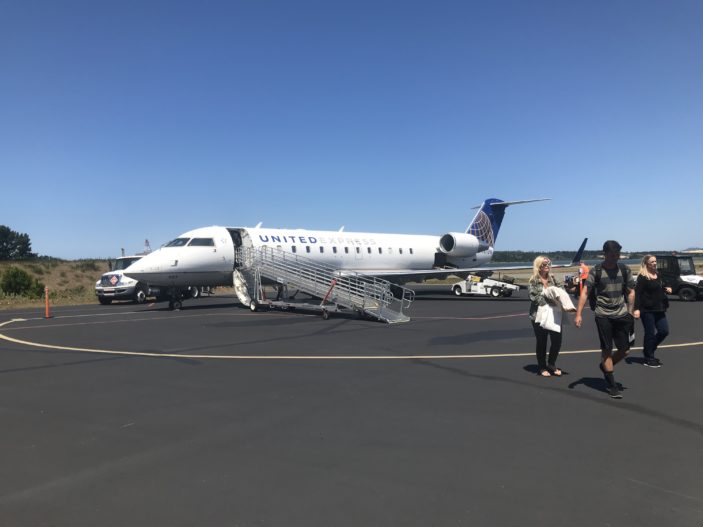 There’s daily flight with United Express between SFO and North Bend, on a CRJ200 Canadair Regional Jet. With just 13 rows, and an hour in flight time, it’s fair to call this a small plane, and you come in looking at the coast as you land. Its immediately clear there’s some stunning coastline around these parts – and those birds eye views do not lie.

The author travelled as a guest of Oregon Coast Visitor’s Association. All photos by the author.