The Greatest Show in Las Vegas: What to Expect from “Absinthe” 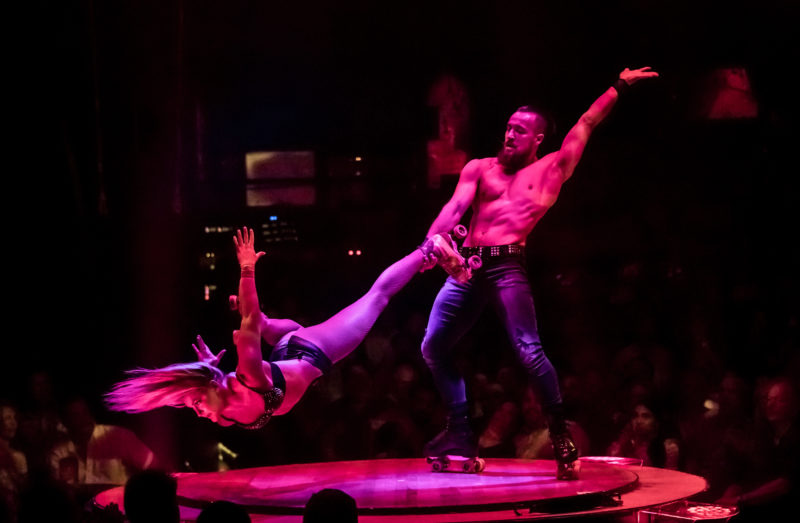 It’s always worth paying close attention when a Las Vegas production signs on for a substantial extension, even years after it has already been playing in the same spot. It means the show has become its own sizable piece in the endless jigsaw of culture, class and crass that is a typical night on the iconic Vegas Strip. And perhaps there is no piece bigger – or most exciting – than Absinthe, a renegade production that violently flips convention, stripping away the niceties and grand gestures of a typical alt-circus romp while still, miraculously, maintaining the polish, pride and elegance that defines a big-ticket Vegas show.

Once the show kicks off, it wouldn’t take long to see the artistry and precision behind all that seemingly improvised, insult-fueled humour. The Gazillionaire, enigmatic and indecorous host of Absinthe, shakes himself of all class and barrels at members of the audience with all intents to offend, shock and disturb as he stumbles around in what resembles a drunken stupor. 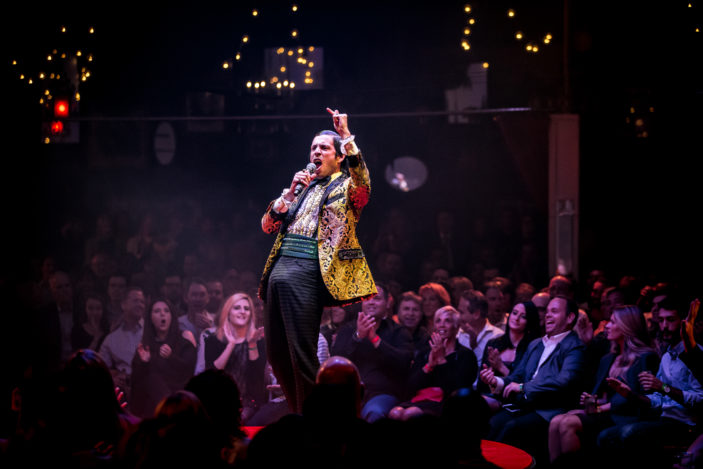 Homophobia, racism, crude sex jokes and more are all thrown out with reckless abandon, stretched to their zenith between the various acts of this uproariously memorable show. It’s all done with a charming smirk, with the knowledge that there’s a fine line between satire and being (disingenuously) taken literally. And though Gaz and his obnoxious quips can start to feel formulaic at times, he treads that line well, managing to direct a welcoming, inclusive show that has been known to attract audiences of all types (except kids – do not take your kids).

This is, of course, not the only reason Absinthe has melted into the fabric of Sin City and become inseparable from The Strip’s one-of-a-kind live culture. The long-running production is by and large one of the most spectacular you can see in Vegas. Reviews have always been so gushingly positive, that a few have made the bold claim that if you ever see one show in your entire Vegas life, make it this one. 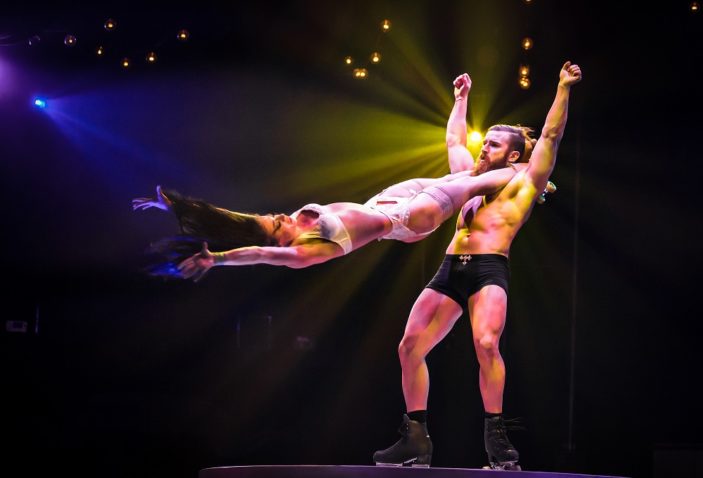 It’s hard to disagree with all that hyperbole after you walk out of that theatrical Spiegeltent and adjust to The Strip again. I guarantee you’ll be craving Gazillionaire’s offensive banter with ditzy co-host Wanda Widdles when you’re walking back to whatever mega resort you’re posted up at. Most of all, you’ll be fawning over the acts that are peppered in between all that showmanship.

2,000 mirrors are barely visible in the dim light of this Spiegeltent, propped up in the Roman Plaza at Ceasars where it will remain for the foreseeable future. Guests sit in-the-round staring at the 9-foot wide stage so that there really is no bad spot; although, the front row is exactly where you’d want to be if you’ve got a particular want to become Gazillionaire’s verbal punching bag – it’s also so close to the performers you may feel a slight adrenaline rush as you’re almost pummeled by flying limbs and sprayed with splashes from a blush-worthy bathtub act. 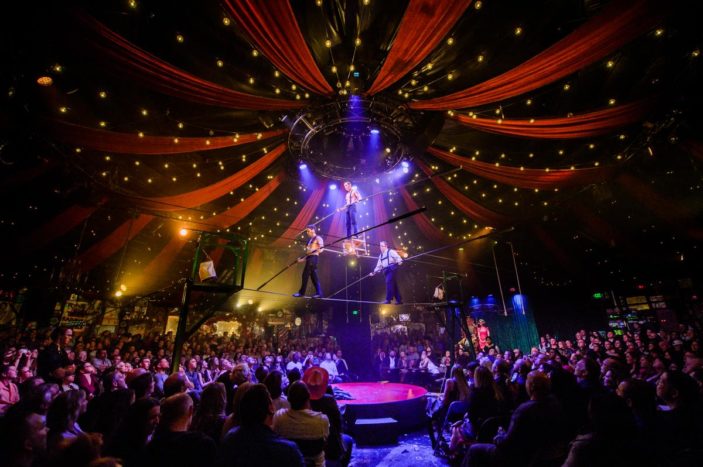 Chiseled strong men, trapeze acts, daredevil rollerskaters (from Hell), Cirque satirists, and showgirls all dance across the stage throughout this 90 minutes show, each thoroughly impressive with their respective talents. The small-scale intimacy certainly helps as well, accenting the danger and meticulous detail in each step that just wouldn’t be possible in a lofty Vegas standard. You’ll leave feeling like you’ve actually experienced a show, rather than just seen it.

At it’s core, Absinthe is about the hipsters, outcasts and perverts turning their nose at Cirque du Soleil, presenting caricatures that have been grossly exaggerated and inverted before being treated with careful, painstaking detail. The immediacy of the actual performances and their heavy reliance on Cirque clichés does take away some of the satirical edge of the overarching story, however, repackaging tried and tested classics with a tinge of arrogance and cynicism.

Still, it’s hard to resist when the choreography is this good. Performers wrap around each other, leaving very little to the imagination; they sing, dance, climb, swing, grasp, taunt, and even bathe in front of the audience. These handpicked creatives are artisans when it comes to performing, and all benefit greatly from a venue which helps communicate just how daredevil these acts really are.

Tickets to Absinthe start from $99 USD per seat. More information can be found HERE

Looking for somewhere to stay in Vegas? Check out our review of the new NoMad HERE.

Looking for something else to see in Vegas? Check out our review of Celine Dion’s residency show HERE.