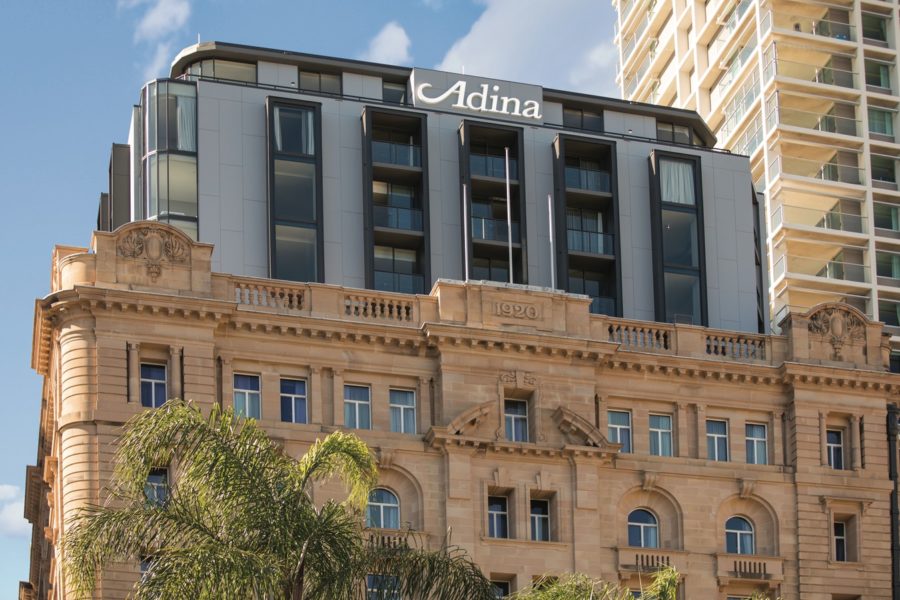 A little over a month ago, the Adina Apartment Hotel Brisbane finally opened its doors on the edges of the Brisbane River in the city’s CBD. It’s in the walls of a grand, heritage-listed building on George Street, a short walk from the Queen Street Mall and the South Bank. The history of the building itself is quite a fascinating one. It took nine years to build (1913-1922), mainly due to material shortages during World War I, rather than some great technical difficulty in its construction. Still, it launched with quite a number of achievements: it was Brisbane’s first high rise government office building, built to house the Queensland Government Savings Bank, making it one of the tallest buildings in the city, and it was one of the city’s first steel framed buildings.

On the building’s top floor, they housed Queensland’s first official radio station, 4QG, between 1925 and 1942. And it was also notable for the immense size of the ground floor’s banking chamber, with an ornate ceiling, marble finishes and ionic columns. And this is the grand public space that still greets you today, now operating as Adina’s foyer, reception and restaurant. Not unlike the Primus Hotel in Sydney, you can tell they have spent painstaking hours restoring the foyer to its former glory, presenting it in all its true architectural splendour. Some five years of painstaking hours, to be exact.

Not unlike the building’s original opening delays (in that case, caused by World War I), the re-opening of the building as a hotel was delayed a year due to events beyond their control – in this case, flooding. But the challenges only gave them more time to get the building right – and when I stepped foot inside it last month, just a week after it had opened, there was no question they got it right. The architecture as you see it above is nothing short of sparkling.

From the opulence of the marble checkerboard floors, to the original timber walls, and six massive columns supporting the beams which lead to richly detailed panelled ceilings, its truly a work of art. Much of the original construction from the 1910s has been kept intact, such as the staircase with their cedar handrails, restored to its former glory – and where pieces were damaged or missing, they have been reconstructed. You’ll even find the original bank vault doors, which they have designed the Boom Boom Room bar in the basement around.

And hiding amongst this beautiful decor is indeed a luxury hotel, which features 220 studios and apartments, comprising of one, two or three bedrooms, as well as the ground floor Donna Chang restaurant, bar, gym and a pool. There’s also a small cafe on the ground floor, Frisky Goat Coffee, which serves up great bites and brews for breakfast. An extra five levels have been built alongside the historic building, offering balconies with incredible view of the Southbank and Brisbane River.

The rooms themselves offer all the comforts you could hope for; and though many sit inside new, modern architecture, they have taken the spirit of the foyer and the original building it sits above throughout the entire property. You can see it in all the furnishings, from the colours they choose, the lighting fixtures and even the doors.

The spaces are warm, inviting and comfortable – and the river views (if you get them) are spectacular. The beds are incredibly comfortable and the rooms offer everything you would expect from an Apartment Hotel – a space to live and eat and entertain, whether its the standard studio apartment style space (as pictured below), or offering multiple bedrooms with a full living area. 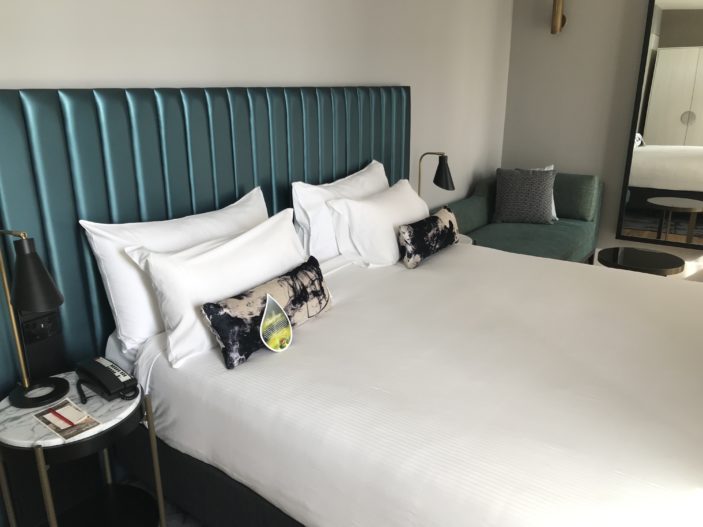 The marble fixtures you see in the foyer make their way into your bathroom, with a modern design, and a rain shower. Enriched Argan toiletries are provided, and the spaces are as cosy and comfortable, as they are stylish and practical. 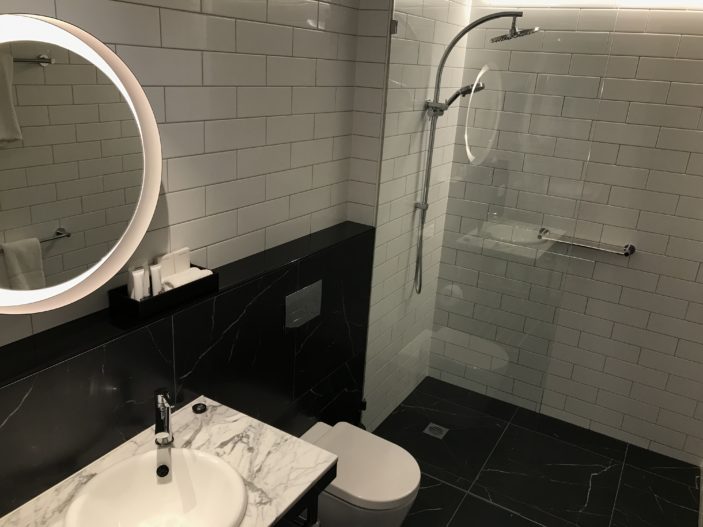 And though the building is steeping in history – its restoration only amplifying it – the rooms themselves are as modern and hi-tech as they come. There are plugs and USB chargers next to the beds, and massive TVs throughout- in the two bedroom, you’ll find one in each room as well as the living area. The wi-fi is fast, free and easy to use, you’ll find climate controlled air conditioning (which you’ll need given the intensity of the Brisbane Summer sun!) and the hotel even offers a gym and a heated pool – fully enclosed but for an open roof.

Come for the comforts, explore the history of the architecture – and then stay for the views.

To book a night at the Adina Apartment Hotel Brisbane, located at 171 George Street, head HERE.

The author stayed as a guest of the hotel for one night. Photos by the author unless otherwise mentioned.