Sydney’s Beer and BBQ Festival shines with beer and music, disappoints with BBQ

Now in its fourth year, the Adelaide Beer & BBQ Festival has made a name for itself as one of the most anticipated events on the South Australian calendar. This year, the event expanded to Sydney for the first time, taking over Moore Park’s Entertainment Quarter for three days of brews, bites and bands.

Beer is first in both the event’s name and focus, with an international roster of some 60 brewers on display. Surprisingly, entry to the festival doesn’t include any beer (many events of this nature will give you a few tokens, included in entry, with additional available for purchase), but you are given a 360mL mug and a program on entry. For $2.50 you can get a “taster” (roughly 1/3 of your mug) of just about any beer on offer. It was a quick and easy system, with card-only payments expediting the process and the sheer amount of beer vendors on offer ensuring that you never had too long to wait for a drink.

The curation was as strong as was the organisation of the beer area – from locals like Young Henrys and Willie The Boatman to US brewery Sierra Nevada, Tasmania’s Moo Brew, Country Victoria’s Grand Ridge, Brisbane’s Green Beacon and Adelaide’s Little Bang, there was an incredible array of drinks to suit anyone’s tastebuds. Hidden amongst the beers was also plenty of cider, some ginger beers and even an alcoholic lemonade. Among my personal favourites was a full flavoured 3.5% IPA in the Big Shed Brewing’s Jetty Jumper, the XPP (Extra Pale Pilsener) from Grand Ridge, Moo Brew’s Hefeweizen and pretty much everything Pirate Life had on offer.

To accompany the tastes of beer, Friday and Saturday night saw an impressive lineup of live music also grace the festival’s stage – Friday seeing Jen Cloher (with Courtney Barnett), Mojo Juju and The Preatures. Saturday, Holy Holy closed out the night as beer soaked punters packed the tent to see one of the country’s best live bands in action, with the group playing songs from across their career – including from their latest LP Paint and their Like a Version of Beyoncé’s “Hold Up”. Earlier in the night, The Gooch Palms, Bob Evans (who performed a solo set of his acclaimed solo material) and Maddy Jane, who teased an unnamed new track. She played this one solo as “We haven’t worked out how to play it as a band yet” and asked the crowd to recommend a title for the song… from memory “Easy” came across my mind. Meanwhile, her released material is sounding better than ever – fully realised and fleshed out by her and her band. Expect big things from this amazing Tasmanian songwriter. 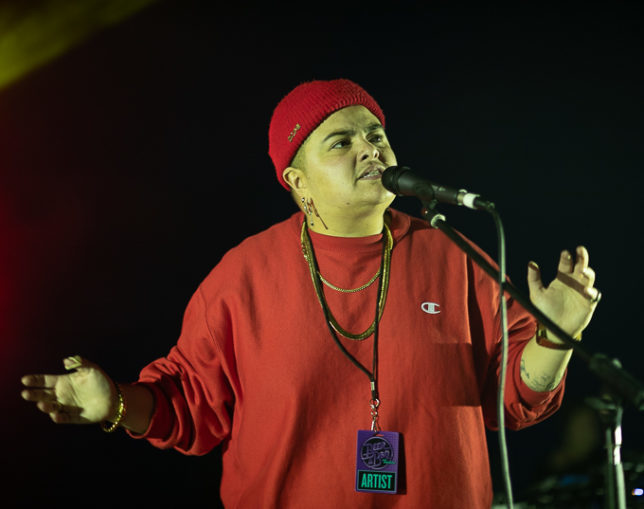 Where the event trips up is in the food department. Saturday night saw only three true BBQ vendors on display – Adelaide’s Low and Slow, local’s Fired Up BBQ and guest Canadian celebrity chef Matty Matheson’s It’s Suppertime. Bovine and Swine were also expected to be on display but they reportedly ran out of food in the afternoon sessions. Understandably, these three vendors saw slow moving lines all night, and surprisingly exorbitant prices, with a burger from Matty costing $22.50, and beef short ribs $30+. Given the website listed things as costing from $5 to $20, the reality of the prices on arrival was surprising to say the least.

Attending a BBQ festival, I was hoping I could, much like the beer, get small dishes from many of these establishments – 100g of brisket from one or a slider from another, sampling the different offerings. Trying out different sauces and different side dishes. Where was the Mac and Cheese? The closest thing were the vegan Tater Tots covered in vegan cheese, from the Vegan vendors – which was another way to avoid a queue (and I’m told the vegan “fried chicken” sandwich was excellent). But when you’re looking at $17.50 per plate as a minimum (for sausages, $22.50 for brisket etc.), and a lengthy wait, on top of the pricey admission, it feels like the event may need to rethink the quality over quantity approach. Most may have tasted 8 or so beers, but only tried one of the BBQ offerings; the vendors serving need to figure out how to expedite the serving process.

Credit to Mary’s Burgers who seem to have finally gotten their production layout to a tee – they were the fastest servers on site by far. In the end, after waiting 20 minutes in one queue that barely moved, I jumped in and grabbed a Mary’s Burger, which hit the spot. Later, a slice of pizza from Lansdowne did the same. But it didn’t feel right to come all the way to a BBQ festival and walk away with a burger I can get anytime and a slice of pizza. Saying I’m disappointed in the BBQ though may be a hard argument given I didn’t get to have any.

With the full three day ticket costing $80 and some individual entries costing as much as $50, as it was on Saturday night, they might argue that you’re paying for the privilege and the music. Indeed, it ensured that the event was never super packed which ensured you could – for the most part – eat and drink what you wanted. But the lack of inclusions in that price really sees the event struggle to support its argument in value for money, even with the high caliber of artists on display.

To have gone to a BBQ festival and ended up with a Mary’s Burger just seems to miss the point – though that was a choice out of impatience and budget, so the fault is my own to some extent. Still, moving forward the festival should consider how they beef up the offering – both in terms of the price inclusions, and the beef itself. It shouldn’t cost $80 to try some ribs. Word is that the Adelaide event does offer more in the ways of food, however, so you can head to the official website below for more details on that.

The Sydney event finishes up today, while the Adelaide event will run from the 6th to the 8th of July, with most of the same artists performing. For more details head to https://beerbbqfest.com.au/adelaide.