Sydney celebrated ‘What Matters’ at the 2020 Gay and Lesbian Mardi Gras parade. 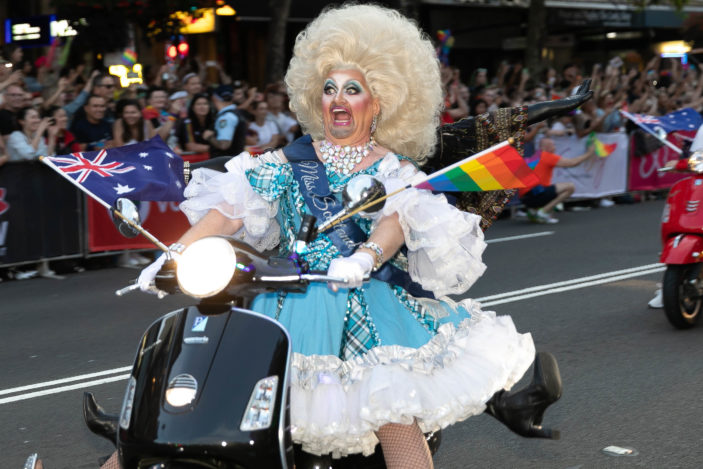 Oxford Street became a rainbow river running through the centre of Sydney last night as the Sydney Gay and Lesbian Mardi Gras 2020 parade chorused through the city.

Over 300,000 spectators flocked to the Surry Hills street to watch the celebration of “What Matters”, the theme of this year’s LGBTIQA+ festivities.

Leading the parade were the classic Dykes on Bikes and Boys on Bikes, followed by First Nations and the ‘78ers – the first generation of Mardi Gras celebrators.

With 191 floats queued for the night, it was an epic display of creativity, pride and pure joy.

Wow. Look at the floats kicking off #MardiGras2020 🌈👏🏼 pic.twitter.com/x0TLseakIf

Mardi Gras royalty for the night Sam Smith and Dua Lipa also joined in on the procession, with Sam jumping in with Twenty10’s float and Dua posing with surf lifesavers.

The pair were in town to play the Hordern Pavilion’s afterparty alongside acts such as Kesha and Brazilian drag queen Pabllo Vittar.

It’s safe to say the city of Sydney has been left in a wake of glitter, confetti and elation as the celebrations continued well into the morning.

It was yet another fabulous Mardi Gras spectacle for the world to see!

You can check out our photos of the evening HERE.