Renowned chef Jessi Singh has returned to Australia to bring his “unauthentic Indian” cuisine to Sydney, opening Surry Hills’ newest restaurant Don’t Tell Aunty. The space, which replaces the old 4Fourteen, is marked by Singh’s fun and casual atmosphere, inspired by the home of a traditional Indian aunty – that being a place where you can show up unannounced and always be welcome.

The bright 85-seat venue, with dabs of playful mismatched gold, silver and copper accents as well as blue velvet banquettes, should be an appropriate hotspot to dive into Singh’s inventive take on traditional Indian food and wine, set to a soundtrack of 70s retro Bollywood. As he puts it, “there’s no ghee or oil in the curry, and there’s whisky in the chai”. 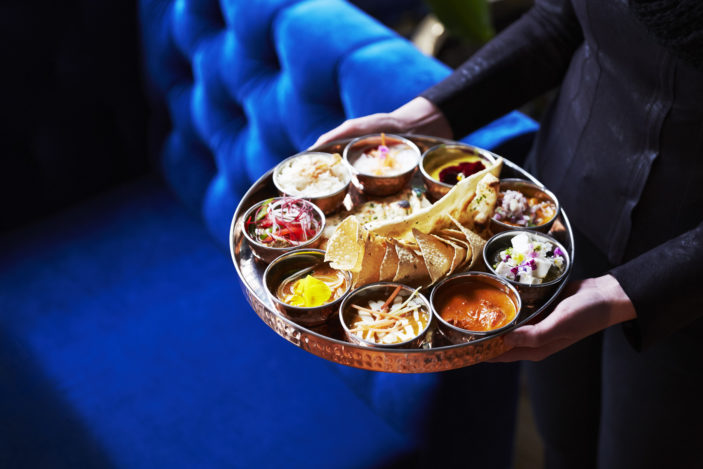 All regions of India will be represented by the exploratory menu, which brings in inspiration taken from Australia and America. Expect vibrant street food, cross-regional curries and tandoori specialities as well as some of Singh’s signature dishes like Colonel Tso’s Cauliflower, an Indo-Chinese style deep fried cauliflower cooked in tomato and chilli sauce, and Papadi Chaat, otherwise known as the “Nachos of the Motherland”.

International winemaker and sommelier Rajat Parr has taken care of the approachable wine list, which should keep diners very happy alongside a self-serve beer fridge stocked with small batch, local and imported beers, and a cocktail list featuring juice-based drinks like the restaurant’s namesake cocktail with beetroot and mezcal rimmed with black lava salt.

Don’t Tell Aunty marks a triumphant return for Singh, who owned and operated three popular restaurants in Australia – Dhaba at the Mill, Horn Please and Babu Ji St Kilda – before selling up and moving to New York in 2014.

Locals will be happy to know that Don’t Tell Aunty has also introduced at $10 buffet lunch which features canteen-style offerings of curries and street food. Those just heading along for dinner can expect a full a la carte menu or a $55 tasting menu.