From the Turkish delights around Auburn to Korean in Eastwood, Greek in Marrickville and Laotian in Canley Heights, Sydney and its surrounds is a treasure trove of some of the world’s finest cuisines. The reasons are perhaps quite obvious: it’s in these areas where you find these nationalities in their greatest numbers. In the case of Haberfield we have a large Italian population, which emerged as the rent in Leichardt increased – along with Sydney’s Italian population. Naturally, this means the area is where one can find some of the finest Italian food in the city.

The crux of this cuisine cane be found in a very small area, where Ramsay road meets Dalhousie. Other than a Thai restaurant (obligatory for anywhere in Sydney, really), most of what you’ll find here is traditional Italian fare – with the odd Australian twist, of course – from the excellent shopping at the unique IGA (we’ll get to that later) to the gelato at Rino Saffioti’s Chocolate Shop, the cheese at Paesanella Latticini Cremeria and of course the full Italian selection at the Napoli in Bocca restaurant.

The Gourmet Safari Walking Tours – which started almost fifteen years ago and operate around Sydney, the country and even around the world, serves as a fantastic opportunity to experience these localised areas with a guide who speaks the language and can pass along their well groomed knowledge of the culture and the cuisine. And, most importantly: it’s a fantastic way to eat a LOT of food. We hope you’re hungry. Indeed, my first experience with this fantastic cultural experience, was walking through Haberfield earlier this month; a six-or-so hour odyssey that taught me a great deal about how the Italian culture has adapted in Australia and how to best experience the food that has resulted. 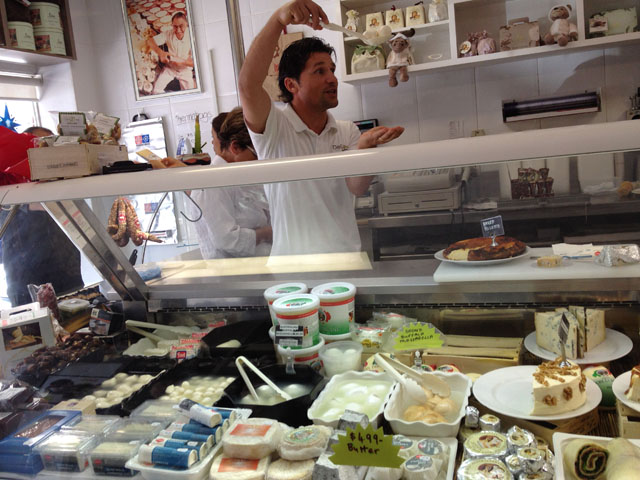 After a coffee at Napoli in Bocca, we started at Paesanella Latticini Cremeria – the local cheese shop. Here we got to try some of the most delicious ricotta I’ve ever had the pleasure to wrapping my lips around. It was so soft and smooth, it felt criminal to only have the one small bite. The shop owners claim it’s their use of pure milk and no preservatives in the recipe that makes it so mouth wateringly delicious. We also enjoyed bocconcini wrapped in prosciutto – both of which they package at the Cremerie – and a unique cheese cake, layered with mascarpone and blue cheese and covered in walnuts. Certainly a powerful taste – but if you’re a fan of either cheese, you can’t go wrong with this one. 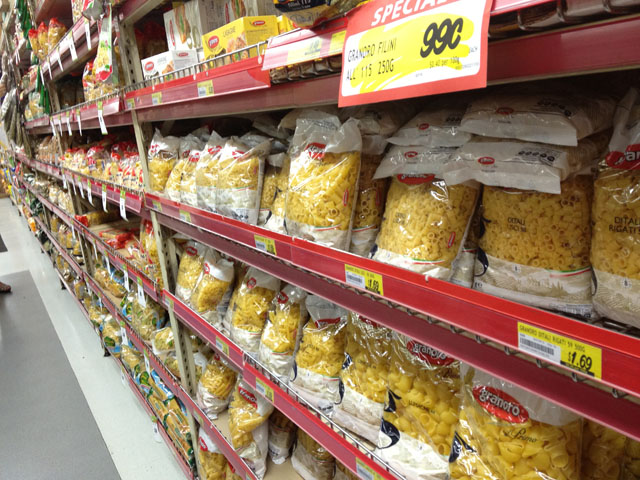 We moved on to the local pasta makers next, which is situated next to the breadmakers. We sampled some breads, looked at the pasta making facilities and then moved on to the Lamonica IGA. On paper, this seems like an odd choice for a walking tour – however what Lamonica has done with this IGA is produce a uniquely Italian experience, with three businesses running simultaneously under the one roof – which used to house a twin cinema. Combining a supermarket with a butcher/deli and a fruit shop, Lamonica has made affordable shopping viable, importing goods from Italy in bulk and keeping costs low for his customers. I was astounded not only by the variety of pasta and meats and everything in between that Lamonica offered, but by the fact these imports were often half the price that you’d find at other specialty stores. If you need some good pasta direct from Italy, this is definitely the place to come.

While there, we enjoyed a Charlotte Christmas cake by Dalcolle, which while popular in Italy, was a little dry for my tastings!… It was then time to go to the deli across the street, which to me seemed like a slightly more expensive version of the IGA, however I’m assured their prices are comparable and their more specialised offerings make sure to provide things their neighbours can not. Here we tried some beautiful olives and got an idea about what Sam (our guide) and his Mother would buy when he was growing up. From pastas to olive oils, sauces and olives, it seemed stores like this served as a not only a connection to the food of their homeland, but their culture too.

The “walking” part of the tour finished up with a visit to the fruit shop, where we got an understanding about how local produce is used to provide a similar experience to what would be found in Italy, focusing on things like Zucchini Flowers and “Italian” Cucumbers as part of the everyday shopping opportunities.

I then snuck in a visit to the gelato at Rino Saffioti’s Chocolate Shop, where I enjoyed a taste of Cherry, Watermelon (Sorbet), Licorice and Hazelnut. The homemade gelato is a recent addition to the chocolate shop, which we would revisit later in the day, and it was impressive indeed! Not quite what you’ll get in Italy, but pretty damn close. Highly recommend trying a new flavour while you’re there – I normally would run the other way if you suggested Cherry gelato – but I have to say it was the highlight of the quartet, with the taste of real cherry, rather than the candied version that seems to be the preferred standard. This was indeed something to write home about. Or on a blog?

As much as the tour is about learning about how “the locals do it”, it’s hard not to get focused on lunch, as this is where the core of the eating happens. And let it be known that they do not let you leave hungry. That wouldn’t be very Italian of them would it?! 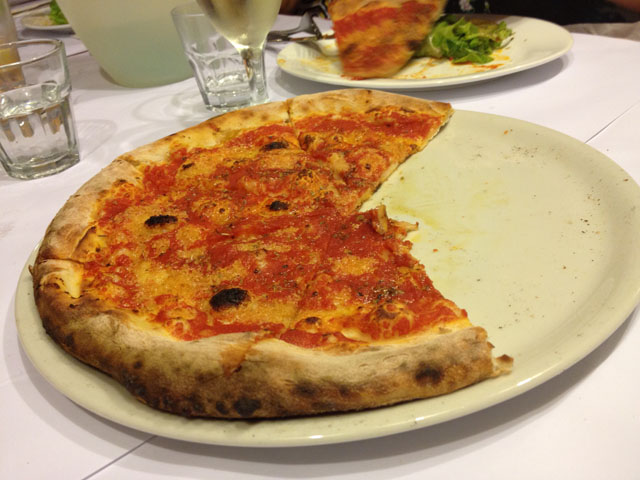 The meal started off with a Caprese salad and some all important wines – not Italian, but the Vermintino white I enjoyed from Chalk Hill was perfect. We moved on quickly to the pastas – the first course! – sampling a four cheese gnocci and a penne with their traditional red sauce and prawns. The pizzas came next, from the traditional “marinara”, which is essentially their tomato base served without cheese or any toppings. The traditional delight that is the Olives and Anchovy pizza, followed and was a sure hit – though it was the Ham and Ricotta Calzone – which seemed to feature the same ricotta we enjoyed earlier in the day – that was the highlight of the virtual degustation we enjoyed. So fluffy, so light, so much flavour! I’ve never had a better calzone, I can tell you that much. All this was accompanied by a mixed leaf salad and, yes, more wine… 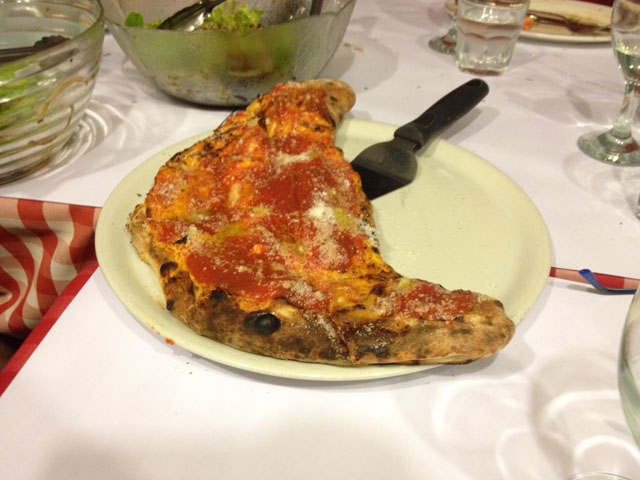 The day finished with the all important apéritif/digestif at the local liquor outlet, which, unsurprisingly, sold a lot of Italian wines and liquors that are difficult to find elsewhere. We enjoyed the tradional Lemoncilla and some Processa, which really hit the spot. Then it was time for the desert (just in case the day of food wasn’t enough for you yet…) and we went to the local chocolate makers at Rino Saffioti’s Chocolate Shop, where we learnt how some of the chocolate is made! It wasn’t quite Charlie and the Chocolate Factory, but we DID get to pretty much eat chocolate straight out of a tap. And that was not an experience I’ll soon forget. 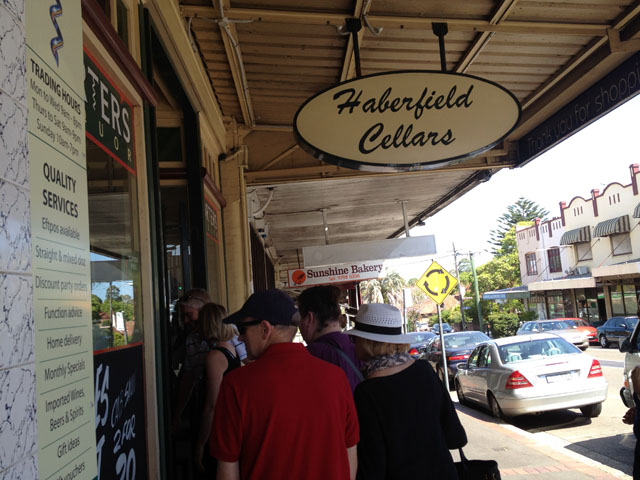 It’s amazing that places like Haberfield exist right under our noses, but without the local insight, we spend most of our time just passing it by. As someone who lives about 20 minutes away from the suburb, I feel it a bit criminal that this was my first visit to and experience of the area. Needless to say, i’ll be back again before long – to stock up on some more Italian pastas if nothing else! Oh, and for that ricotta…

The next Italian Gourmet food safari of Haberfield takes place on 14th December, ahead of monthly dates from February through to July 2014. All the details for this safari, and the many other Sydney walking and “on wheels” safaris can be found HERE.

All safaris vary in cost, and the Italian tour costs $120 per person, which includes all mentioned above. It should be noted that the organisers change up the destinations of the walking tour every month, so repeat visits come welcomed!

This article was originally published in November 2013. Larry was kindly invited along by Gourmet Safari for the experience.