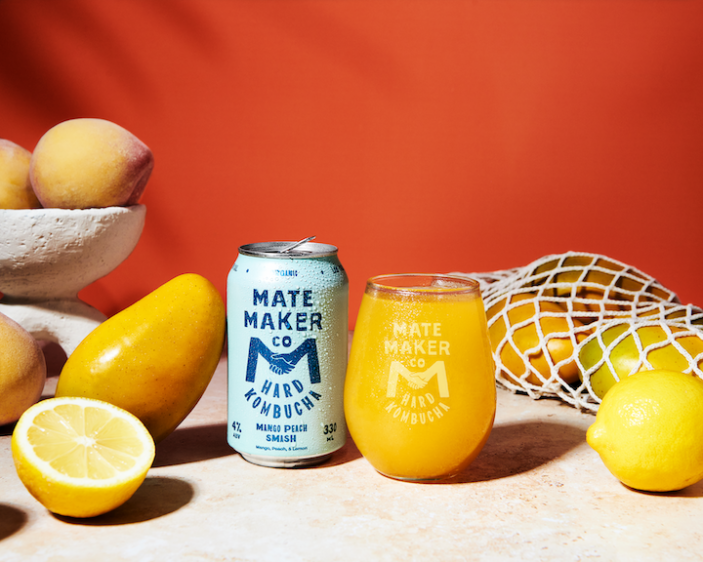 We sat down with Medcraft to talk about the story behind what’s involved in introducing a new style of drink into the Australian market.

First off, can you tell us how you got into the partnership with RÜFÜS DU SOL?

It’s been an organic process building Mate Maker. We went to school together probably twenty years ago. We’ve been friends for quite a long time, but obviously went on to do very different things. Different worlds really. They obviously went on to form RÜFÜS DU SOL and I immersed myself in the world of drinks and marketing.

Our other co-founder Tom, I met when I was at Diageo, cutting our teeth together. I was learning marketing and Tom was rising through the ranks more in the commercial and sales side. We’ve all been friends or colleagues for a long, long time.

So, a couple years back this whole idea for Mate Maker kind of emerged. At the time I was living in LA just down the road from the guys in Venice. There was a huge shift there, and there continues to be a massive shift in how people are drinking and the choices that they’re making.

That all happened in America five or six years ago. Alcoholic Seltzer came on the scene, and people had a choice. They had something different from just a beer or a sugary RTD or glass of wine. I suppose that really kick started this whole movement; at the same time as people were conscious about what they were eating and drinking. People want to enjoy a drink that’s “less bad” for them. We didn’t just want to launch another alcoholic seltzer because we could see that that was already happening.

We were at the guys’ house when they had just launched their album Solis. John handed me a hard kombucha. I thought “what the hell is a hard kombucha”? They were like, you should try it. It’s good, it’s light and refreshing. I was in the process of thinking about what was next for me and thinking that hard kombucha would be a thing in Australia. I think Aussies would love it, something that is refreshing and full of fruit. I could see where seltzer was happening in Australia but felt like this was the next thing. I told Danny that I wanted to launch this hard kombucha brand in Australia and he said it’s so funny you should say that, we were thinking the exact same thing, so it happened.

So, Tom’s been in Australia and had different roles at Diageo but he also worked at Four Pillars which is an amazing gin company. It’s so funny, the first time I called Tom to tell him I wanted to launch a hard kombucha business in Australia – he looked at me and was like, what is hard kombucha? That started the whole process about two years ago. We’ve been on that journey ever since to create a product that we’re proud of and a community that we’re proud of as well.

The craft beer market has expanded so I think people’s taste seem much more diverse now. When I grew up, there were one or two beers you could choose from. You’re right, it’s probably a perfect time for that sort of expansion into the market.

Totally, people are looking for new alternatives. They’re wanting something different. I think that’s the reason hard seltzer has come out of the gate so strong. If you think about the choices that we’ve had for the longest time, craft beer would have been the last big shift in the options available fifteen years ago. I’ve worked in craft beer and that’s been a big part of my career, but other than that you’ve got premixed RTD’s, which exploded in early 2000s; like Smirnoff Ice.

You’ve still got the traditional Aussie beers, it’s still massive but not really getting traction with the next generation audience. They’re looking for something that is more mindful and better for them. Alcohol hasn’t kept up or accelerated as some of these other categories have. Think about simple ingredients. Think about transparency in terms of what’s inside of it and even things like sustainability.

Not only do we believe that this new product would be what people are looking for today because they are curious and wanting new choices, but we also saw the opportunity to create a business and a brand that embraced those bigger beliefs and purpose. Simplicity, transparency, and sustainability are at the core of it. It’s not just Hard Kombucha, but we can also introduce new products as consumers look for new things. That’s essentially the whole idea behind Mate Maker: it’s a hard kombucha product today, but we’ve already got other products in the pipeline that are drawing inspiration from what’s happening in America.

Something that seems to come across is your organic sustainability and I think what you’re saying really does resonate with the modern consumer.

For us, sustainability is something that is in the fabric of all decisions that we make. It comes through in every part of our business. From the packaging, we use 0 plastic, and it is all 100% recyclable, to being made from organic ingredients that aren’t sprayed with chemicals or harmful pesticides, fertilizers of GMOs that impact ecosystems.

We’re also a 1% for the Planet member which is a non-for-profit organization started by the founder of Patagonia which means we donate 1% of our top line sales every year to climate change organizations. We’re also working with local climate change partners and working towards certifying our entire business and supply chain to be carbon neutral with many more announcements coming over the next few months.

How long did it take for you to learn how to make hard kombucha?

Good question. A lot of nights and a lot of stress; but it was easier said than done to launch a hard kombucha brand and bring it to Australia. What we didn’t realise was just how hard creating this type of product was gonna be, for so many reasons. I think the first reason is creating something that’s all organic is tricky from the supply chain perspective.

Another big challenge was just understanding and knowing how to make it. I’m not a brewer, nor is Tom and the RÜFÜS guys certainly aren’t. I think it took probably twelve months, even eighteen months’ worth of trial, failure, sampling, speaking to tonnes of different brewers locally in Australia, lots of different partners. We just couldn’t get to a point where we were happy with the product. It was a real challenge for us because we were on this path to create a delicious product that was made using real organic ingredients.

The supply chain challenges were in terms of getting access to those ingredients. The knowledge needed in terms of how to create a product with these ingredients was a challenge. Hard kombucha isn’t even in Australia yet. You put all of that together and it’s a big hurdle.

There are people that are brewing great products in America. There are brewers out there that know how to do this. It’s just that we couldn’t find them locally in Australia because it’s such an undeveloped category here. I spoke to different people and asked who are the brewers that are leading this space, and who are the best ones out there. That’s where I met Dan and Josh who lived in San Diego and are two of the foundational team that led the hard kombucha business in the States. I think it just organically got down to the part where I said to them, would you guys be interested in becoming our brew masters and partners in the business? Help us create something in the Aussie market that you’ll be proud of.

How did you choose which two flavours to go with?

It was a lot of deliberation, but I think the challenge with these new types of products is to get people to understand how it’s going to taste. The flavour profile is the biggest challenge.

When I think of kombucha I think of tart bitter things, but you have a bit of sweetness in there by the sound of it.

We had a bunch of different flavours that we were kind of working through, but I think that the end of the day we wanted to really make hard kombucha approachable for people. We started with the Citrus Mule. Everyone loves a Moscow Mule, right? It’s a kind of globally understood as a refreshing cocktail. Citrus forward flavours were popular in hard kombucha in the States, so we thought that people would get it quickly.

With Mango and Peach, we always try to capture summer in a can and bring that profile forward. I think for Aussies mango and peach are very summery tropical kinds of fruit. They were two of the early favourites and we have a bunch of other ones that we’re working through that we’ll be releasing as we get further on down the track.

As far as distribution goes, that’s a whole new world, isn’t it?

It’s definitely a huge focus for any independent brand that’s trying to launch. How do you get to sell this stuff? That’s where I think Tom’s background is so valuable in terms of understanding the market, knowing customer relationships, and navigating that environment. In the early stages we are focussing on distribution with a lot of independent retailers. We’ve got an amazing team of salespeople that have already started selling it and are having amazing responses from people. We’re gonna be building it primarily with independent retailers across NSW Queensland and Victoria to start. Then we’ll really focus on the touring and music side of things over summer. It will also be available for the RÜFÜS shows in NSW QLD Victoria and in SA. Over summer we’ll get a really good read on how quickly people receive it and build into other markets next year.

It’s certainly an exciting venture and it sounds like it’s got all the ingredients there to take off.

It’s a labour of love, but everybody’s put so much effort into it; from the band to me to Tom. We really haven’t rushed it; we’ve done it right. We didn’t want to take additional cuts. There were so many times where we could have put in cheaper, less ingredients, but we decided to hold the line, because it’s something that we all gotta be proud of, especially if we’re going to put our name into it. With expectations from a lot of people and expectations of ourselves. We’re super excited and we’re proud of it and really excited for people to try it at the shows as well. A captive audience of RÜFÜS fans who can drink something from the band at their shows is special.