Review: The Hotel Indigo in Cardiff brings Welsh industry to life in the city’s epicentre (Wales)

Arriving on a train into Cardiff station, it was a 15 minute walk through the heart of the busy city on a beautiful Sunday afternoon to take me to the relatively recently opened Hotel Indigo Cardiff; hidden away in the Dominions Arcade. Like many Hotel Indigo’s around the world, this hotel has been built into the walls of an existing building; in this case re-appropriating the Dominions House, which was built in 1921.

There was a lot happening in Cardiff when I arrived. It was a cycling day, so a lot of the roads were closed to cars, and there was a football celebration in the streets – so this was something of a non-optional walk. But it was a chance to get a glimpse at the city… and in spite of some older streets that all of the UK is famous for (making rolling a bag around a challenge), it was an easy trip. The hotel sent out an email about these road closures earlier in the week, so it didn’t come as a surprise.

You enter the hotel through the Dominons Arcade, which sits opposite the Queens Arcade shopping centre, which I walked through to get to the hotel. The arcade made for a rather unique entry procedure; the check-in area being to your left in the photo below, and then the elevators standing behind me; local art sprung over the walls on the right. 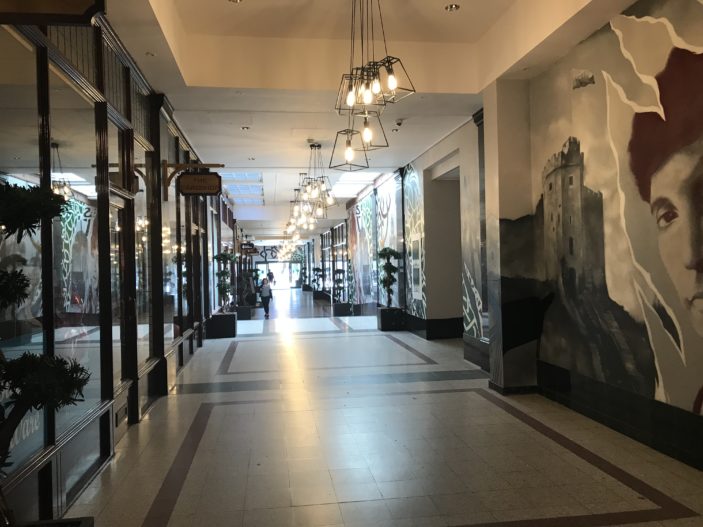 Every room has its own theme, with “Music”, “Made in Wales” and “Welsh Industry” being the three themes that scatter throughout the intimate 122 rooms that occupy the building. I was given a room that reflected and celebrated the Welsh Industry, with an industrial, rustic design accentuated by photos and paraphernalia from the city’s peak industrial era. I’d go so far as to say the design borders on steampunk. Nowhere is this more evident than around the lights next to the bed, and in the carpet below the bed. 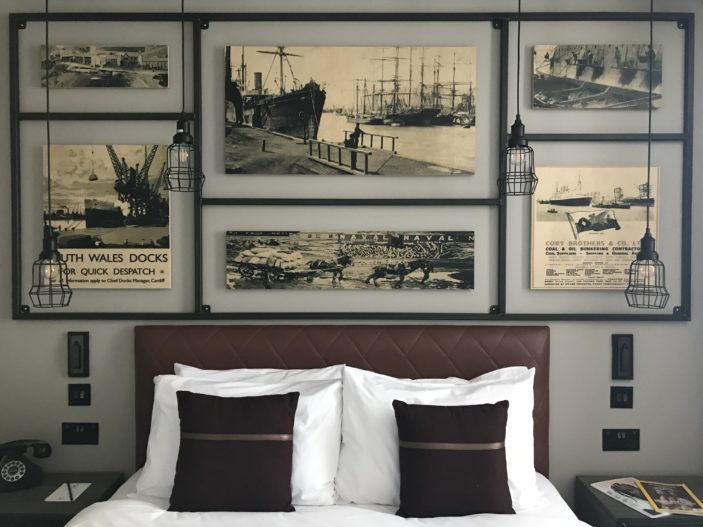 But the technology in the room doesn’t sit in the early 1900s (even if that phone might suggest otherwise)… next to the bed are USB chargers and AC plugs aplenty. Most are UK only, but there’s one European plug too by the desk. Under the bed is a carpet with gears on it – the rest of the room is carpet free. The Queen bed itself is as comfortable as they come – though its the pillows in particular that deserve a mention. A neighbourhood guide sits in your room and does help you out with some details of the surrounding area… and you’ll find it on the TV too!

You’ll find a huge number of channels on the flat screen TV and there’s a speaker in the bathroom so you can keep listening while in the shower. They provide you with robes, that are very nice indeed, and the towels are excellent. The shower has both a rain shower and a handheld shower. Given this only opened at the end of 2017, it all still feels very new, and the amenities are kept in excellent shape. 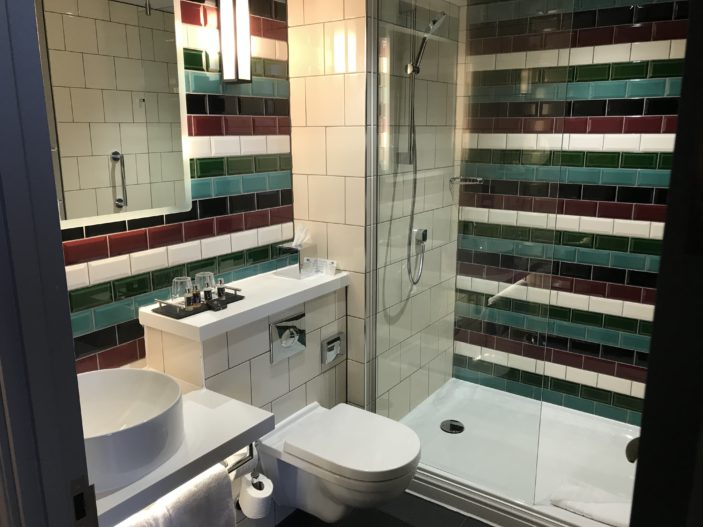 You’ve also got a fridge in your room, in which you’ll find a bottle of sparkling and still water, complimentary to all guests. But if you need anything else to fill up your fridge with, there’s a Boots across the street and nearby markets with whatever you need. You’re in a shopping area, so hell – if you needed an HMV you’ll find one next door. There’s even a Tim Horton’s across the street, on the exterior of the Queens Arcade Mall (in which I also spotted an American diner)

Other Hotel Facilities and Features

The industry theme that I found in my room extends throughout the whole hotel. Look out for faux bricks in the lift and miners hats sitting behind reception, for starters. It brings the hotel together nicely. A testament to how new the hotel fittings are, you’ll find energy conscious lights in the hallway, so they’re off until you walk into it. You also don’t get any lights in the room until you put your key in the door. Elsewhere in the hotel you’ll find a fitness centre on level one, and restaurant on level 6, which serves breakfast from 630am until 1030am. As with many Hotel Indigo branded locations, for breakfast there’s a continental buffet with a menu of hot a la carte options.

The whole hotel is also bursting with free, fast wi-fi, with no password needed.

There are direct flights to the Welsh capital from plenty of destinations – though if you’re in London, it’s an easy two hour bus or train trip. I was coming internally from Northern Wales, and my two and a half hour train ride from Wrexham to Cardiff went by in a flash, giving me a great taste of the countryside.

The hotel refers to the city as “the good time neighbourhood”. I’m here on a Sunday night and am assured they have plenty of things to do in town as it’s “industry night”. Indeed, I had no troubles finding a great gig to go to and places to enjoy a drink. Cardiff is very much a major bustling city, that just happens to be surrounded by a wealth of history. Famous most are its castles.

Cardiff castle is a minute away from the hotel, and you’re in what’s known as the “castle quarter”… so a lot of the cities most well known attractions are nearby. City Hall. The National Museum (open 10-5 Tuesday to Sunday). The castle, meanwhile, is open 9-4. Beyond this, there’s a seemingly never ending assortment of shops, restaurants and bars within a short walk from the hotel. You really are in the heart of it all. 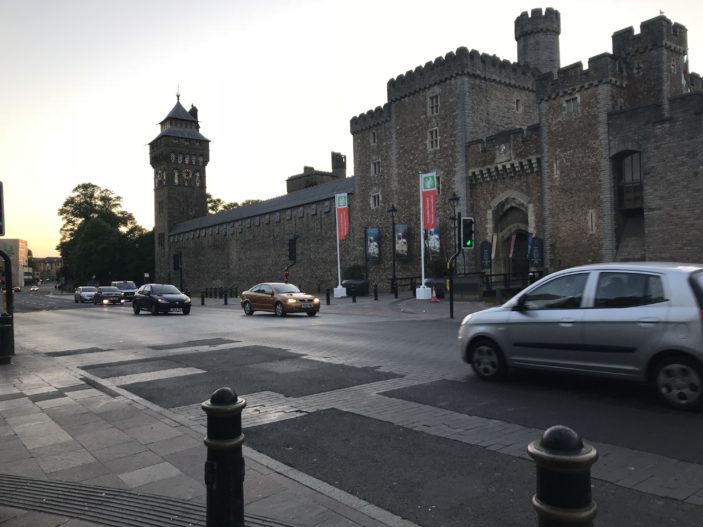 There’s something of a strange vibe to this hotel; the way it’s built makes it a fairly unique experience of checking in and getting in and out of the building. There’s nothing traditional about the space, and it’s hard to even know you’re in a hotel until you get to your room. But it’s this that makes it such a comfortable and unique stay – and certainly does little to take away from the comfort of the room. And it couldn’t be in a better location. Definitely a hotel to consider next time you’re in the Welsh capital.

The Hotel Indigo Cardiff is located in the Dominions Arcade, Cardiff CF10 2AR, UK. To book a night, and for more details about the hotel, head to their official website. Or make a booking through the Hotels Combined booking form below.

The author stayed as a guest of the hotel for one night. This article was originally published in July 2018, all information was correct at the time of printing. All photos by the author.