Hotel Review: Hotel Zed Kelowna (Canada) is a stylish motel refit with the playfulness of a hostel in wine country

There was a time in the travel industry when saying you ran a motel was anything but an attractive quality. Now, all over the world, clever hoteliers are bringing inspired re-fits to motels, helping not just reframe what we know a motel to be, but to go so far as to make it, dareisay, “chic”.

From The Jupiter in Portland to The Burrard in Vancouver, the modern motel takes on all the luxuries of a hotel, and uses the conveniences of a motel to its benefit, not its detriment. In the town of Kelowna, which is about four hours inland from Vancouver, lies one such establishment. The Hotel Zed opened in 2016, and converted a drab three floor motel (the Abbott Villa, whose 1 star Yelp reviews never would have done it much service) into a comfortable, playful accommodation option, that competes against resorts and other hotels in the area to offer something a little bit different. The retro 1950’s style fit out and colourful design, with branded comvee sitting by the front reception, is immediately striking. But it’s what’s inside that counts.

The best way to describe their inspiration would be to compare it to a hostel – but I don’t mean you have to share bedrooms or bathrooms. Rather, they’ve added communal spaces that add a sense of playfulness to the establishment. There’s the small outdoor pool and hot tub, of course, and the check in area which has a small general store and a comfortable gathering area with colourful furniture, record player and all.

But search a little deeper and you’ll find a karaoke room (which they call the “disco room”), free to use for guests of the hotel, with a mirror ball hanging in the centre (and I’m told a fog machine is in there too). On the roof is another comfortable communal area complete with comfortable lounges and plenty of room to enjoy yourself. Elsewhere, there’s even a games room with ping pong and other facilities. They’ve got bikes you can use, free drinks and coffee in the lobby and I’m sure I’m barely scratch the surface of their offerings. I will say though, while they were immensely helpful at the front desk, they didn’t have things like an umbrella to borrow (it cost $20). So doesn’t expect everything from the hotel.

The room itself is a small, refitted motel room, with most of the built-in facilities you need; a hairdryer tucked away in the bathroom drawers being the only thing not immediately obvious. The shower head was temperamental and the toiletries – which were self serve containers on the wall rather than standalone mini containers – weren’t properly labelled. It’s these reminders that you are in a dated motel. But the only real issue for a modern traveller in the room was that there were not enough plugs; they proved hard to find. And combining the desk space with the TV doesn’t make it a room for the business traveller, only amplifying the small size of the room. But there are a tonne of different room types throughout the hotel, so definitely look into what options are available when you book – there may be something that better fits your needs. 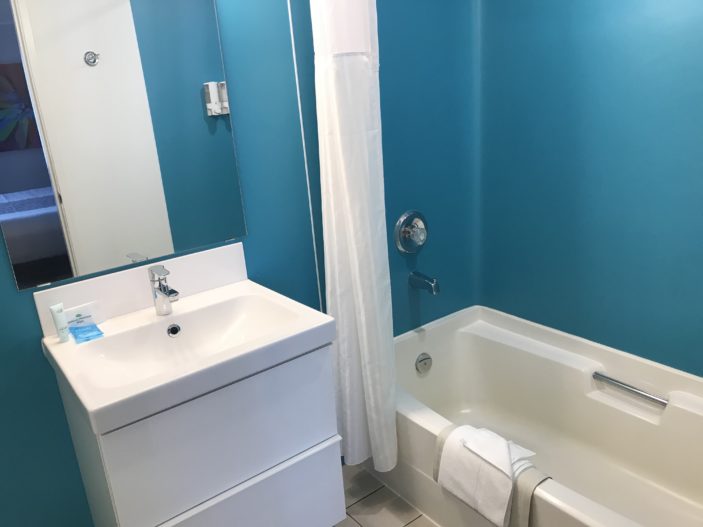 The massive smart TV was excellent though, and there was a comfy chair against its table so it doubled as a desk (though ironically I had to unplug the TV to use my laptop). You wonder if rather than having a stand-alone armchair in the corner of the room, they could have put a small desk there instead. The old rotary phone was a nice touch, as was the inclusion of a “How To” guide for said phone, on the cork bulletin board above the TV. 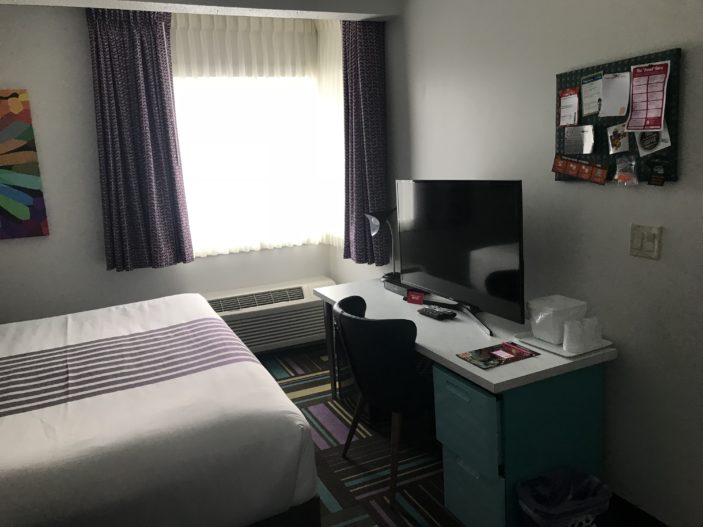 The highlight of the room though was its bed. It could not have been more comfortable, and I genuinely wanted to steal its pillows. I was surprised though to leave my room at 9.30am and not have the room serviced during the day. Surely they come through later than that? This is ultimately not a hotel room for people who want to spend a lot of time in the hotel room, but still want to comfortable rest. Thankfully they give you a lot to do in the hotel itself, and the surrounds are some of the best in all of Canada. 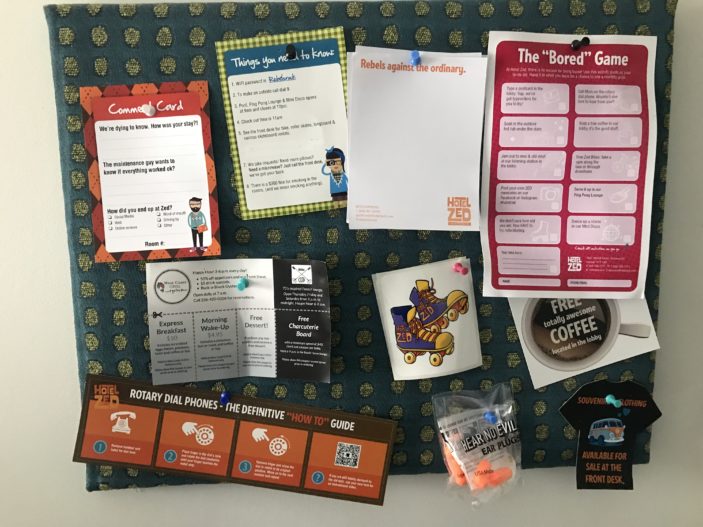 Speaking of the surrounds, also on the bulletin board were some discount cards for food nearby, plenty of tips about the hotel and some free ear plugs should you need them. And Kelowna and its surrounds are very much worth exploring (though it’s a pretty quiet place so I don’t think you’ll need to bring the ear plugs with you. The Hotel Zed is just around the corner from the city’s main strip – the aptly named Main Street – where you’ll find shopping, restaurants, late night eats and nightlife. I recommend Doc Willoughby’s Public House which serves all day $7 breakfasts – though doesn’t open until later in the morning. But Kelowna is in wine country – the Oakanagan Valley – and so no trip to the area would be complete without a visit to some wineries. 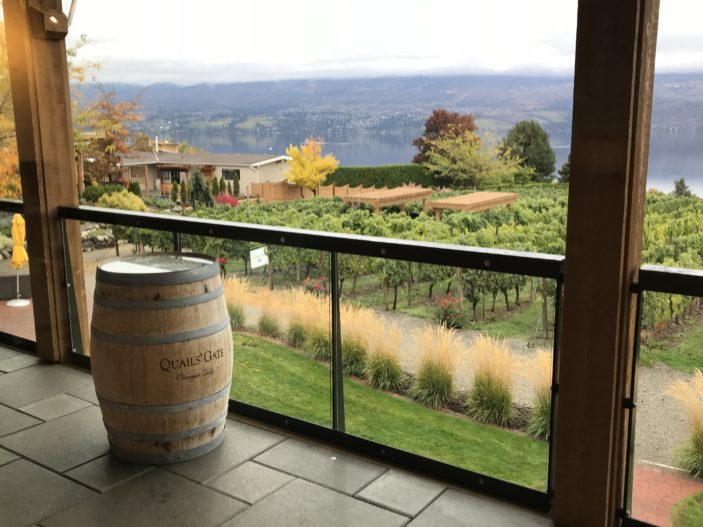 I hopped on with Experience Wine Tours during my stay, who took me to five wineries around the region. The destinations change regularly, though this tour started at Quail’s Gate, with a full facility tour of one of the older wineries in the region. Then at Hatch, one of the newest, where we enjoyed cheese, meats and fruits along with our tasting, the rare single vineyard Tantalus, had some blind tastings at Sandhill and ended things off at Cedar Creek. With some 300 wineries in BC, across 10,000 acres, and a large chunk of them in the Okanagan valley, this barely scratched the surface. 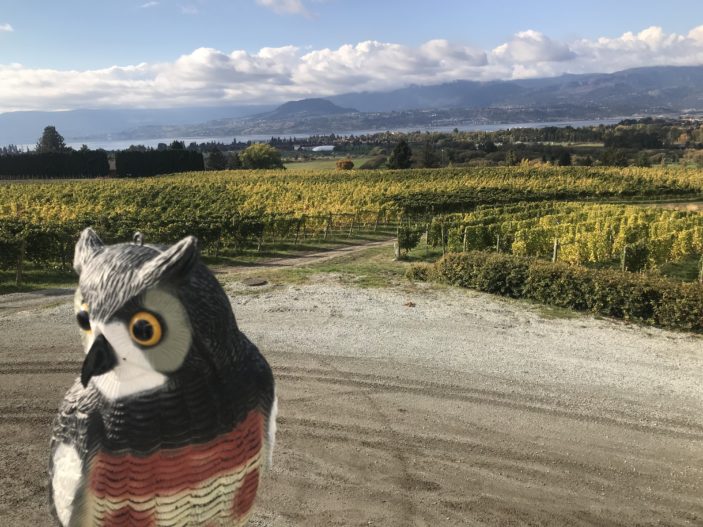 And when you’re all done, come back to town and head to Knox Mountain, walking distance from the Hotel. From here you can climb the mountain trails and enjoy a spectacular view of the city that no trip to Kelowna would be complete without. 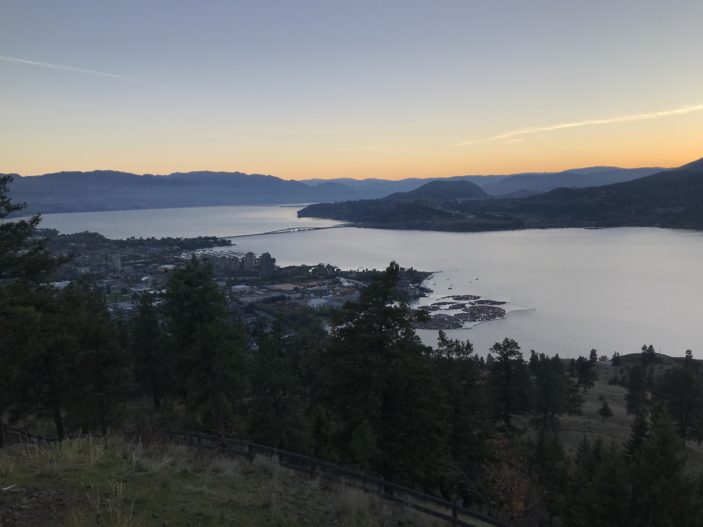 Kelowna is not just one of the most beautiful places in Canada, but around the world. And Hotel Zed sits at the heart of the city, giving you easy walking access to the city’s main strip, waterfront and surrounding parkland. The hotel itself is a unique product that blends its motel infrastructure with the playfulness of a hostel and the comforts of a hotel. Their beds are among the most comfortable I’ve ever slept in – though the smaller room sizes and the less-than-modern showers may not make this the hotel for everyone. Still, Hotel Zed provides such a wonderful experience it’s hard not to recommend it.

Air Canada flies daily from the East Coast of Australia to Vancouver, from where you can drive to Kelowna or jump on a short 45-minute or so flight. To get from the airport to Kelowna, we recommend booking in with Current Taxis, who exclusively drive you around Kelowna in Teslas. With a see-through rooftop, it’s a unique and environmentally friendly way to see the city and get where you need to be.

To book a stay at the hotel, head to their Official Website, or search for them via the hotel booking form below. To learn more about Experience Wine Tours, head HERE, and to book with Current Taxis, head HERE.