Having an address as iconic as 1 Leicester Square might lead one to expect to find another overpriced London Hotel, resting on the laurels of its location rather than on the experience it could provide its guests. Rest assured, Hotel Indigo‘s newest residence, which opened earlier this year, goes above and beyond to present one of the finest hotels you’ll find in all of London. But that’s if you can even find the location.

Arriving in the bustling Leicester Square straight from the airport (a nearby Underground station making this transit a breeze), I realised I walked right past the hotel a couple of times before I actually found the entrance; seemingly little more than a hole in the wall sitting opposite M&M’s World. But their staff quickly spotted me, coming out and bringing me into the cosy reception, through beautiful, art deco doors (which, to be fair, are pretty hard to miss), and into a room with decor to match; a theme that would run through the entire hotel.

Only open for two months when I stayed back in June, the hotel was built into the space of a former office building, which explains the low-key entrance; though the incredible rooftop bar that overlooks the Square and all of London, incredibly lay unused for the last decade, having been a nightclub in a previous life. Now the hotel uses it as their in house dining option, serving their breakfast buffet, lunch, dinner or just a sneaky cocktail to all their guests. All while offering an unparalleled panoramic view that will make you the envy of all your friends on the ‘Gram (just don’t forget the hashtag #hotelindigo1lsq).

The Hotel Indigo brand, part of the IHG Group, has made a name for itself paying homage to the surrounds. And in the case of the Leicester Square location, which sits next to London’s most famous cinemas and in the heart of the iconic West End theatre district, it’s unsurprising that the rooms and the hotel have drawn design inspiration from that world. From the art deco lettering and colours you’ll find in your hallways, to the spectacular entrance and the lighting fixtures, there is a staggering attention to detail thanks to interior designers Michaelis Boyd. But it’s really in the rooms where this all comes to life.

There are a number of different room designs throughout the hotel, and on level seven, I was in a balcony room (yes, this hotel is the only one in the Square to offer balconies), with what they call a “showtime” design. It’s a theatre influenced design where spot-lights hang above your bed, rigged up on ropes as they would be above a stage, while the bed itself sits against the back of old theatre seats. 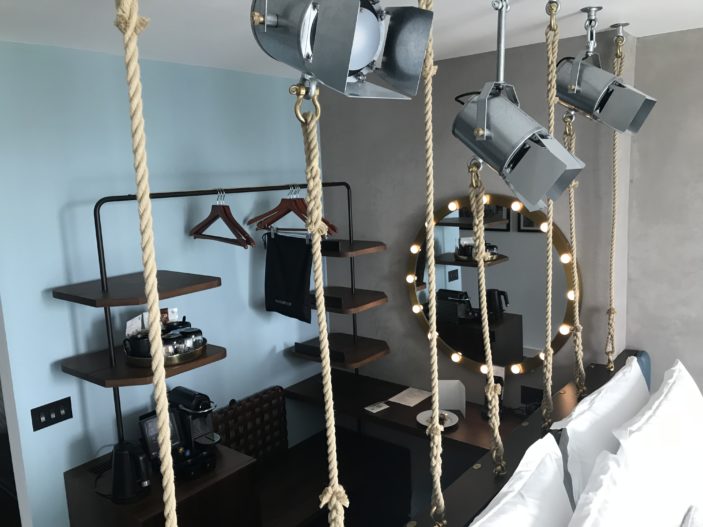 You can even still see the seat numbers below the ropes; whether or not that’s an added effect by the hotel, or these are actual saved seats from an old theatre I’m not sure – though I’d presume the former. The well lit mirror will also ensure you’re ready for your close up. 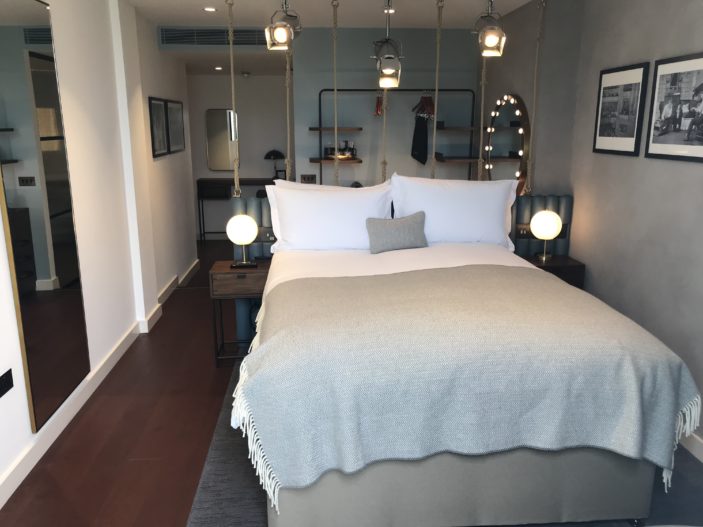 You’ll find with the art deco lights sitting on either side of the comfortable bed, and mirrors and black-and-white photos lining the walls. There’s also no shortage of light switches (including a master kill switch right next to the bed) and places to charge your devices, including USB slots, ensuring that the hotel offers all the modern amenities you’d expect of a hotel of this standard. 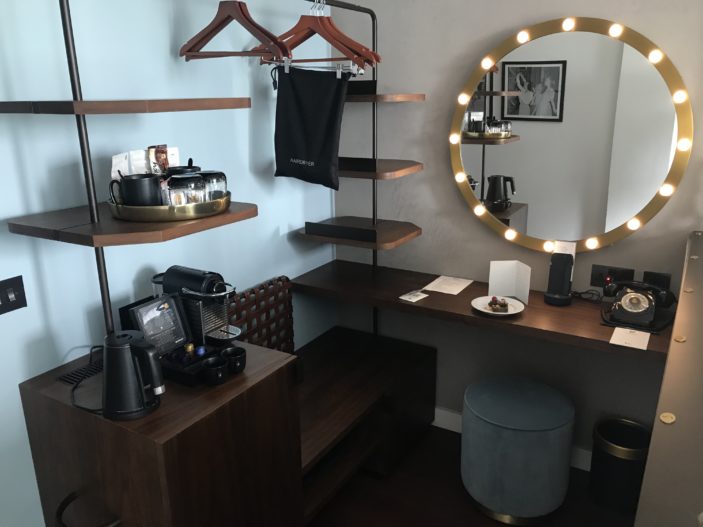 It’s a cosy room, with the designers making the most of limited square footage in the space, both to add to the experience of the space – such as in the design of the phone above – to its practicality; a place for your bag tucked away under what we’ll call an open plan cupboard, which also houses the tea and coffee facilities.

There’s also a “Handy” mobile phone you can use in lieu of a roaming device. It provides the guest with complimentary international calls, and data you can use to get around the city without needing a local SIM. This is quite a remarkable device that I’m seeing pop up more and more in hotels all over the world, particularly in Hotel Indigo locations. As I have a local SIM in London I didn’t make use of the device, but I have to imagine if you are just visiting the city briefly, it would be all you’d need in the city. 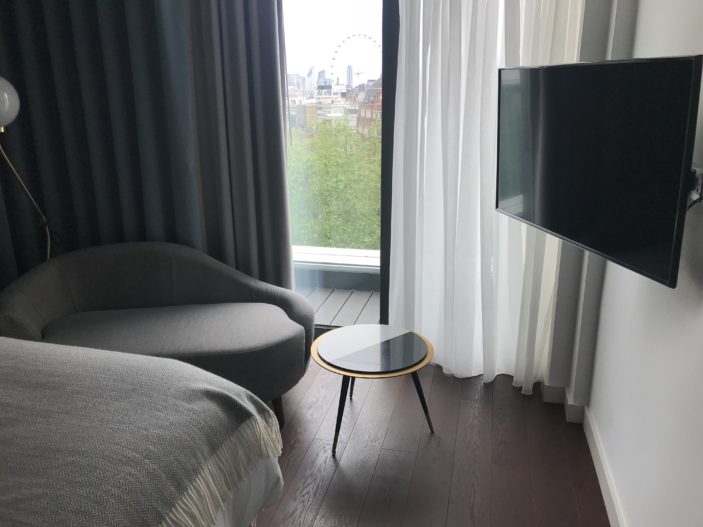 They even find room for a small sofa, table and a large flat screen TV, upon which you can access a tonne of information about the hotel and the surrounding area; though some of the channels didn’t work on the TV, it was an amazing TV all the same. It all sat against the balcony’s large glass windows, which offer a permanent view of the city; you’ll see the London Eye above, sneaking in between the theatre-style curtains. 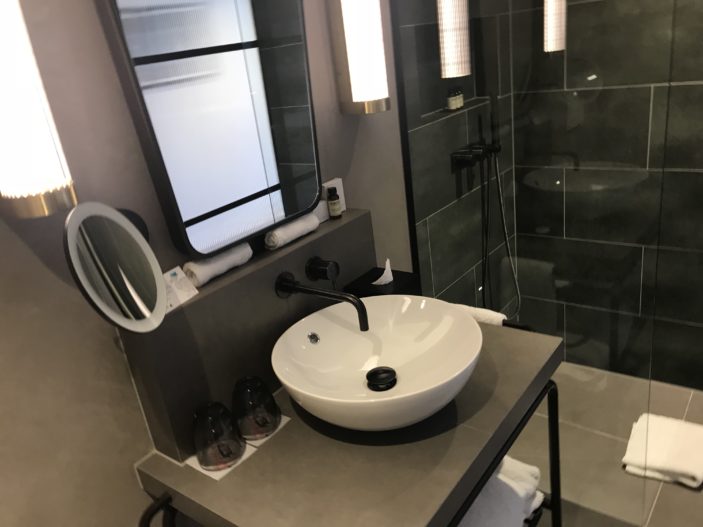 Even your bathroom fits the theme; the green walls of the shower a hallmark of any art deco building, as are the light fixtures that sit against the mirror; the beautiful bowl that acts as the sink proving a beautiful touch for the design, too. C.O. Bigelow – “The Oldest Apothecary in America” – supply the toiletries.

Not all the rooms have balconies of course. Their “theatre rooms”, for instance, don’t have windows and sit in the centre of the hotel. In the place of the windows though are massive TV screens, and the room is touted as a “hideaway”. You’ll also have “Scriptwriter rooms”, with old framed theatre scripts on the wall.

You’ll find the hotel’s dedicated food and beverage venue on the roof, with Leicester Square’s only rooftop outdoor terrace providing an unforgettable panoramic view of London. Breakfast is included for guests up here, from 630am to 1030am, with a continental buffet, and the option to choose one Hot à la carte option from a menu; and of course things like tea, coffee and juice.

After breakfast wraps up, they offer an à la carte menu that runs from 12noon through to 10pm, with an incredible selection of dishes, designed to be enjoyed as a three course meal, with plenty of sides to share. The meal was amazing, and it was all served with some of the best mojitos in town, all with a view to die for. 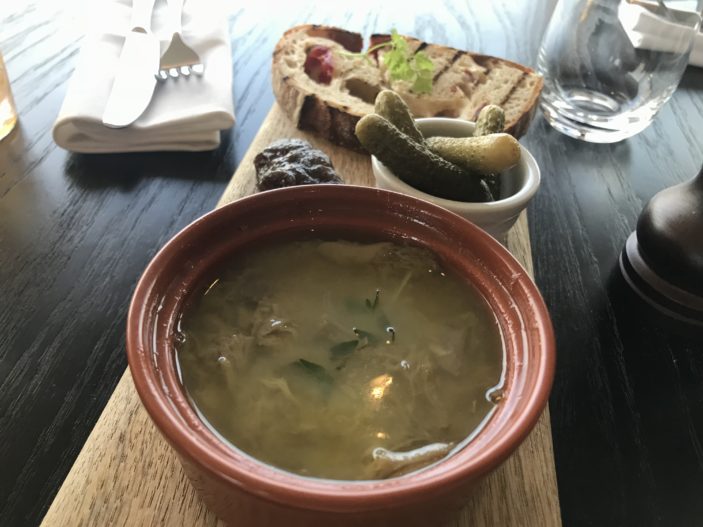 The above starter came rightly recommended – a pot of duck, red onions and orange marmalade, served with toasted sourdough and cornichons. And below, H. Forman’s London Smoked Salmon, with fresh crab, avocado and creme fraiche which was an inspired take on some classic seafood flavours. 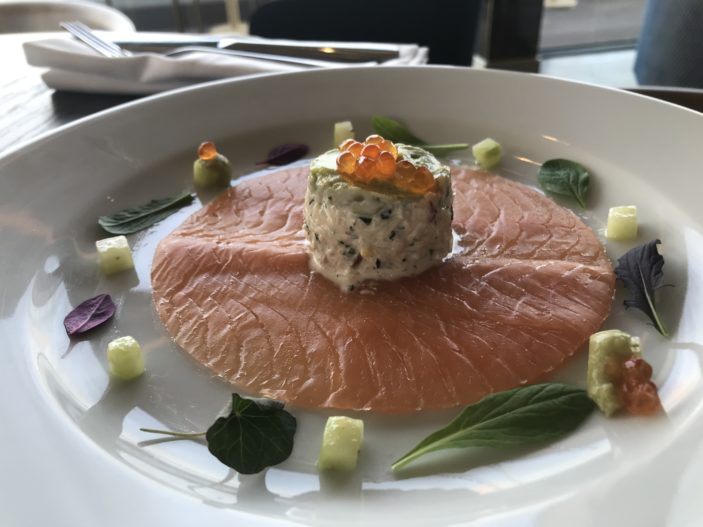 For the main course, there was everything from mussels to a 28 day aged rib eye steak, risotto and a burger. But it was the roast cornfed chicken breast, served with pressed thigh, herb gnocchi, shitake and peas, all with a tarragon dressing that served to be the highlight of the menu. 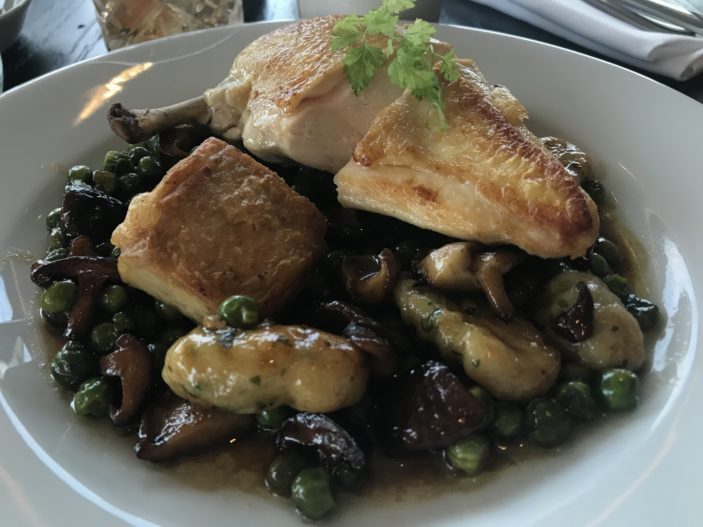 They also had their take on the most classic of London meals – the fish and chips – served in tempura, as the Market Catch of the Day, with pea puree, tartare sauce and lemon. And as for the chips, they came as a side, with every main offering either fries, new potatoes, buttered greens or salad. And with mains starting from 15 pounds, it’s quite a decent amount of food for the price; especially considering the area, its quality and let’s not forget the view. 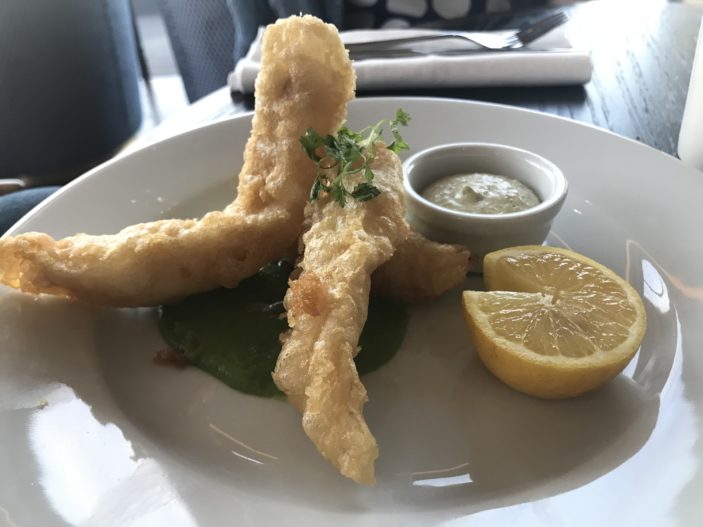 We polished it all off with a spectacular crème brûlée, with Madagascar vanilla, and a hot apple and cinnamon crumble. Other options included a dark chocolate pannacotta served with raspberries, or a selection of cheeses, sorbets and ice creams.

Tucked away, the rooftop also houses an event room, and there’s a gym that guests have access too, though it’s not an official part of the hotel. While on the rooftop I also discovered what would have to be my only complaint about the hotel; the lifts are not connected by one single button. So when you are waiting for a lift, you end up pressing the button for each lift. What that means, however, is that once one lift arrives and is filled up, the other lift will arrive as well, often unnecessarily. That meant that while you were in the lift making your way back down to your room or the lobby, you’d often be stopping unnecessarily. Since I visited the hotel in its infancy, they may have already fixed this issue… or maybe it’s just something they can’t work around due to the design of the original building. But it was a surprising, yet minor issue for an otherwise state-of-the-art facility.

You couldn’t be in a better location should you be in the mood for great food or small bars in Soho, theatre in the West End, some movies in the famed cinemas of Leicester Square or a flutter at the nearby casino. And then there’s everything and anything else that London has to offer, accessible by one of the many Underground stations within walking distance. Leicester Square is closest, but Charing Cross and Piccadilly Circus are only a minute or so further on foot in opposite directions. You’re also sitting right in the midst of China Town. A favourite of mine is Wong Kei, for some cheap and wonderful crispy duck pancakes.

Aside from the comment on the lifts (and in spite of it), it’s hard to find anything not to love about this hotel, from its rich inspiration of the surrounding theatre community, to its views, impeccable dining and one of the most comfortable rooms I’ve ever stayed in. This truly is a hotel that proves that you can have it all, by a hotel chain who seem to have become quite good at doing just that. But in their Leicester Square location, Hotel Indigo truly perfect their craft.

Hotel Indigo London – 1 Leicester Square. For more details about the hotel head to their official website or consider booking yourself an night via the booking form below!

The reviewer stayed and dined as a guest of the hotel. All photos by the author.