With 671 rooms/suites and an overall aesthetic that has been finessed by three different firms – Rocco Design Architects for the building, AFSO for three dining spaces and public areas, and Hirsh Bedner Associates for guest rooms – the stunning Hotel VIC on the Harbour is certainly an ambitious undertaking, even for Hong Kong. Operated by Sun Hung Kai Properties, it features on the same portfolio as some of the city’s most sought after hotels, including W Hong Kong, The Ritz-Carlton, and Four Seasons, so the standard is unquestionably high.

The bar is met for the most part. VIC sure is a fascinating luxury lifestyle hotel, especially when considering its surprisingly low average nightly rate and that it is perfectly located as part of just-open development Harbour North, which houses an endless array of retail and dining options. Guests are also a stone’s throw from both North Point station, giving direct access to all the typical stops on the HK island side (my personal favourite being Sai Ying Pun), and North Point Ferry Pier, where it’s just a matter of hopping on a New World First Ferry service to opposite Hung Hom. For those familiar with the city, it’s technically right across the water from Shangri-La’s trendy Kerry Hotel (which we reviewed here). 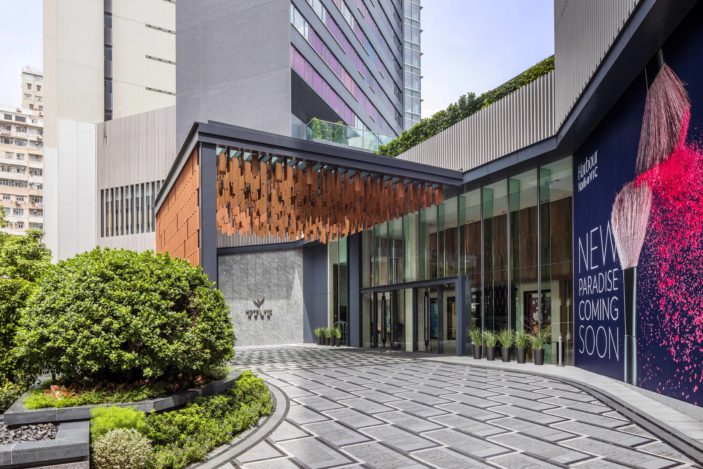 The hotel also runs a complimentary shuttle bus service to and from some of HK Island’s trendier neighbourhoods, although catching the MTR is probably a faster way to get around, given the traffic. However, one would be missing out if they don’t explore North Point a bit more. While there is a lot of development being done here, you can still find plenty of side streets with old-world charm and local foodie favourites, plus the hotel is only a 10 minute walk to the popular Chun Yeung Street wet market.

All the trimmings one would expect from a five-star hotel are here, including its elegant collection of art pieces. The large and admirable collection of public artworks helps give the interior its polished swagger, beginning with the stylish port cochere with numerous orange lights hanging down, and continued dramatically with AFSO’s notion of “Urban Reflections”, realised through a spectrum of interlocking marble screens paying homage to Hong Kong’s cityscape, as well as textured glass fittings that refract light to imitate shimmering water ripples. This includes a transfigured stainless steel sculpture by Peru-born artist Aldo Chaparro greeting guests as they elevate from the entrance to the main lobby upstairs. The piece, consistent with the artist’s love of bent steel structures, is surrounded by water, which again plays into that “Urban Reflections” theme. 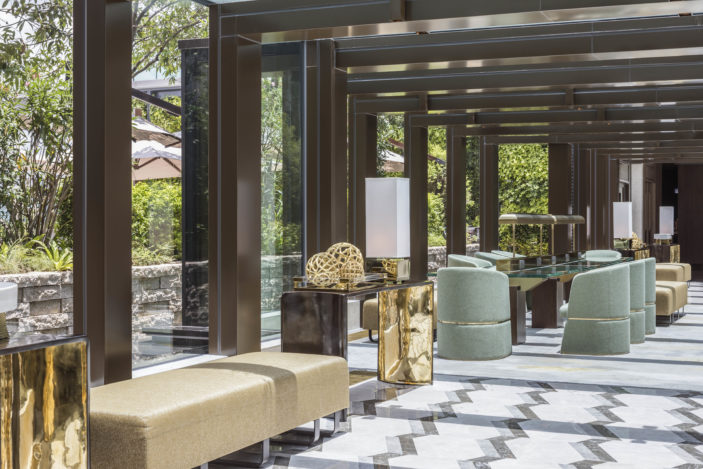 Two towers are linked by a narrow glass bridge, smartly designed as a co-working area with ample seating, light spilling in from all sides and illuminating the elegant fit-out. Some check-in/check-out kiosks are also located here, handy for rushed business travellers who may not have the time or patience to tackle reception during busier periods. Luckily, my visit was when the hotel was still in its first few weeks of opening, so reception was relaxed and unhurried with attentive, efficient and personable service. 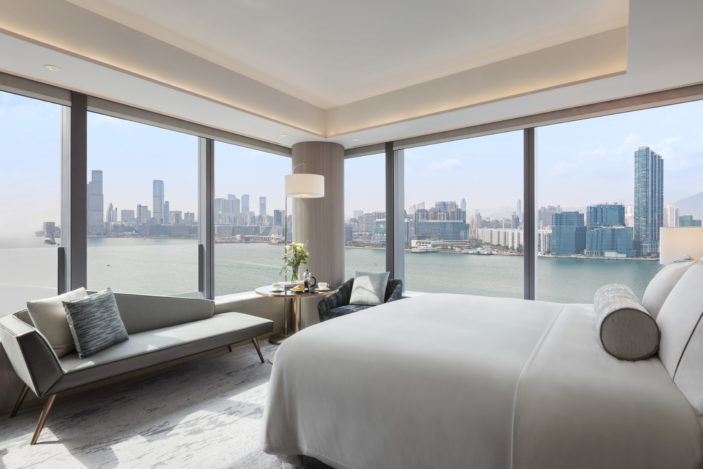 Whether you’re in the East or West Tower, immaculate and theatrical views of the wide harbour, which splits both sides of Hong Kong, are guaranteed. My Deluxe Harbourfront room is angled into a corner of the building with a bright and energetic design, helped by the wide and spotless windows that wrap around the 36sqm space. The exceedingly comfortable King Bed is the type you’d never want to leave, the free mini-bar (any restocks are charged to the room) is certainly an appreciated touch, and the jaw-dropping modern marble bathroom screams luxury from the high-end amenities, fitted neatly in a square near the twin sinks, to the snug bathtub which stands right next to a wet-room style rain shower and features its own TV on one end. 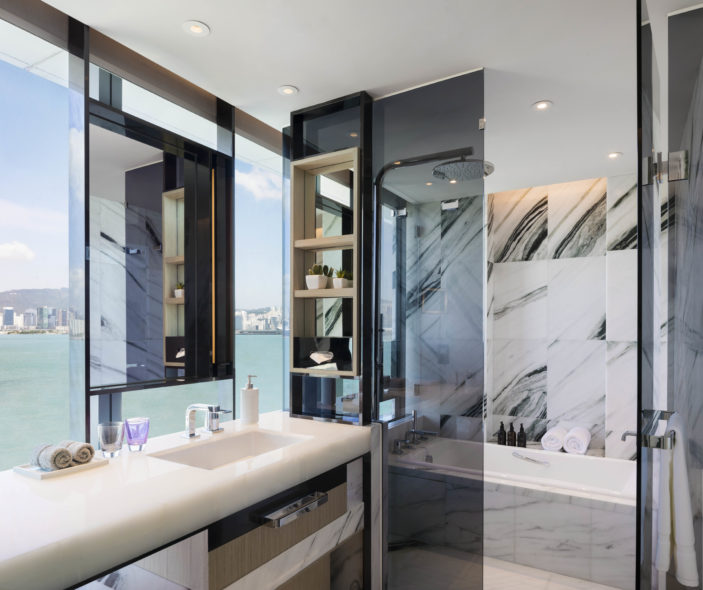 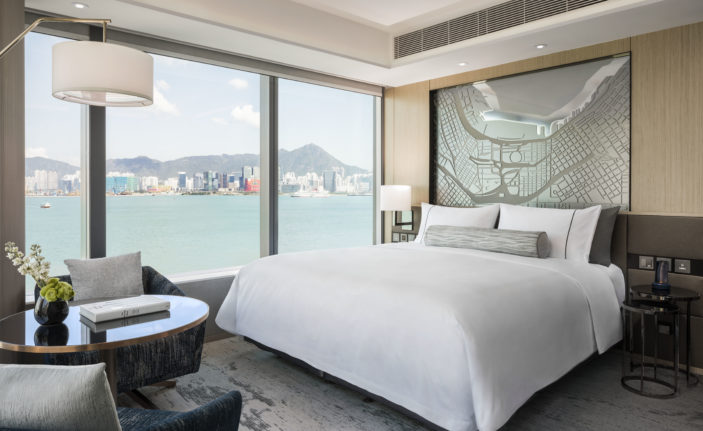 I’ve been a big fan of Hirsh Bedner Associates since staying at some of their other urban hotel projects, which include Four Seasons Kyoto (reviewed HERE) and Shangri-La, Tokyo (review HERE). Here they’ve gone light and bright, letting the grand view do most of the work while complementing with neutral tones and ultra-modern furnishings. Technology plays a huge part, with automatic blinds controlled from a panel beside the bed (and yes, there’s a master switch too) and a free-use smartphone with unlimited data so those on a quick trip can avoid buying local SIM. The phone, which guests can take with them while exploring Hong Kong, also gives you free international calls to Mainland China, Japan, South Korea, USA and UK. Though perhaps most telling of the desire for a tech-forward stay is the hotels very own smartphone app, which guests are encouraged to download, syncing their personal device to the room and the facilities. 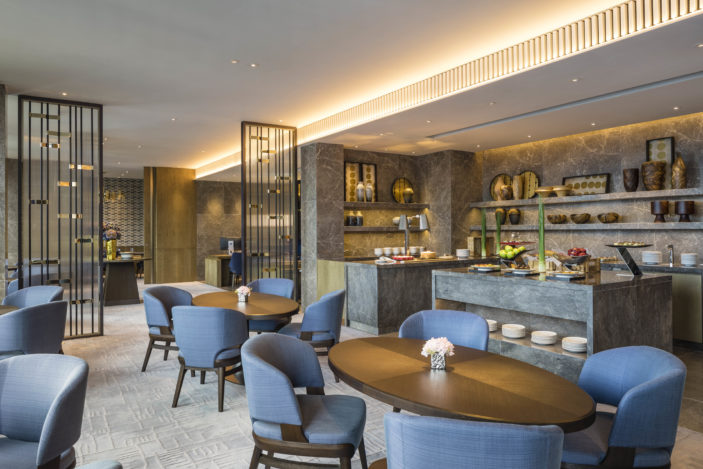 If you’ve got Club access attached to your room, then you’d be wise to make full use of it. The elegant space has some gorgeous fine wines up on the 22nd floor, as well as endlessly impressive views, comfortable seating, and a well curated selection of bite-sized eats. Those in Club rooms can also enjoy a breezy private check-in and check-out up here. 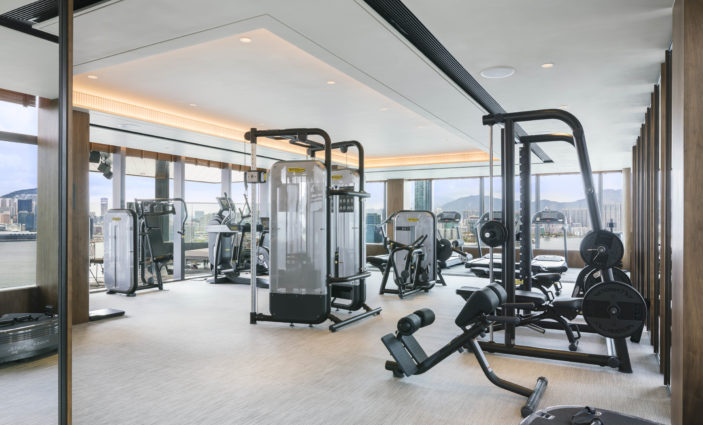 Clearly, consistent harbour views are a requisite at VIC, so expect the 24-7 gym in the East Tower to impress, with most of the equipment overlooking the postcard vista. Interestingly enough, the space also features the very first virtual reality cardio machine in a Hong Kong hotel, a futuristic looking device that gamifies a fairly intense core workout. You’ve also got the usual treadmills, free weights and exercise bikes in abundance, some facing the nearby infinity pool. 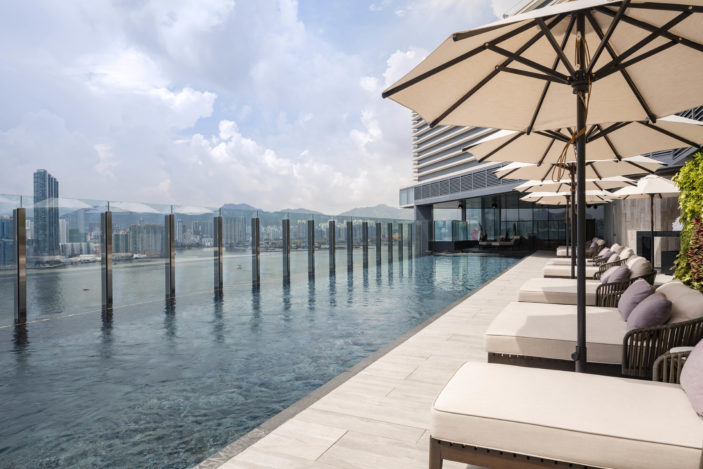 And the pool is definitely where you’ll want to hang out after a long day exploring Hong Kong’s many interesting neighbourhoods. At 25 metres, it’s not the largest, nor does it command much space, but once again the view plays a major part, and the undercover jacuzzi is exceptional while feeling open and well-connected to the pool: the type where even a shy solo guest would feel comfortable and welcome even if larger groups are using it. 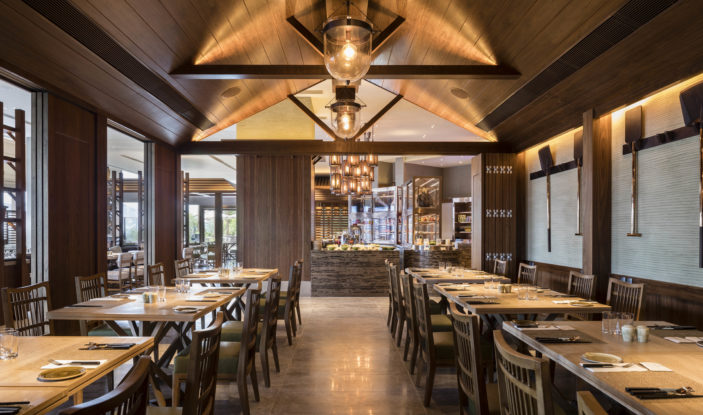 Back down to the lobby and across the bridge, the West Tower is where all three signature restaurants are located. All-day indoor-outdoor restaurant The Farmhouse is the go-to for the breakfast buffet, which operates with two large stations and offers an incredible amount of variety. Unfortunately, not everything is a hit here, but the quality produce, from the cold cuts and the artisan breads to the seafood, ensures an enjoyable start to the day. The space itself is a cute expression of the restaurant’s namesake, paying homage to a cosy farm cottage with a timber truss roof, gorgeous walnut timber and shades of aubergine purple and olive green that look spectacular when complemented by the rustic farm tools that hang on the walls. If weather permits, take your breakfast over to the luscious outdoor garden and start the day al fresco.

The Farmhouse Deli is a smaller off-shoot outside of the restaurant, staying open a bit later with a focus on to-go coffee and pastries. The sandwich I did have from there was rather bland, though I did get in closer to midnight, and the food may have been sitting there all day.

A bit on the higher end of the scale is 23rd floor restaurant Cruise, European in both approach and design with pastas, seafood dishes and a signature 90-day dry aged British porterhouse steak. I didn’t get around to dining there, but I did head on up for a nightcap, working through their excellent cocktail list while admiring the cityscape and panoramic harbour views. Big groups should nab a cosy lounge outdoors (if the weather is playing nice) in the impeccable outdoor area, which offers the hotel’s absolute best vista. 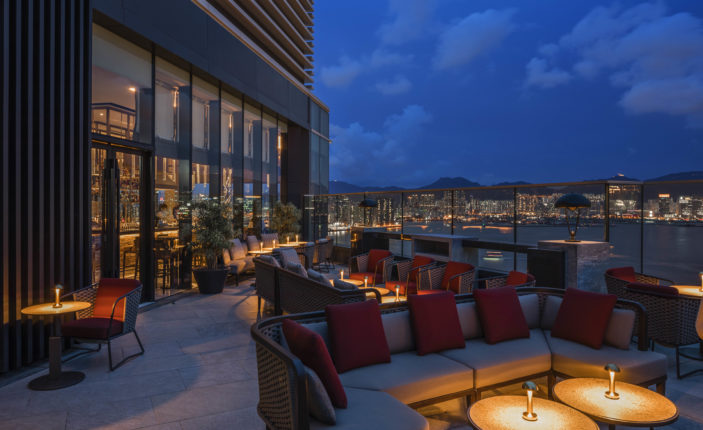 The warmth of Cruise is preceded by the hotel’s most cerebral artwork, that being Epoch by visionary Canadian artist David Spriggs. It’s a complex structure behind a large glass window, built to “give shape to time and perception” with numerous layered figures pointing towards a single vanishing point to experiment with the illusion of depth on flat surfaces. The shapes of layered anodized aluminium and metal beams almost looks like it’s imitating Hong Kong’s dense cityscape itself, looking up to a single point of sky which appears as an oval-shaped black hole.

There are many working parts which make Hotel VIC what it is. Most importantly, there’s a level of consistency that ties all those parts, again worked up by three different firms, together in an elegant, smooth, and impressive concert. The very reasonable price is just the cherry on top, and though the food that I did try was “good but not exceptional”, there’s much value to be found at Hotel VIC, no less due to the breezy North Point neighbourhood and its many substantial changes.

New five-star hotels in Hong Kong have a lot to live up to – the city has two Shangri-La’s amongst other high-end brands, as well as a fantastic scene of personality-driven boutiques (like The Fleming) – and it’s safe to say that VIC has strutted onto the scene with plenty of (justified) confidence, itching to make a grand statement and offer a refreshing perspective on just how luxurious affordable luxury can be.

The average nightly rate at Hotel VIC on the Harbour starts from AUD $258.