Peppers Docklands Review: One of Melbourne’s most convenient boutique hotels

The Peppers brand has always been a valuable player in Australia’s hotel industry, with a penchant for seeking out great locations and turning in interesting accommodations with distinct identities. From the mighty bright Peppers Soul on the Gold Coast, to the fascinating Peppers Silo Hotel in Launceston, which has converted disused silos into luxury accommodation (with an award-winning restaurant to boot), it’s always worth seeing what this Mantra-cum-Accor brand gets up to.

Though nowhere near as interesting and unique as the more recently opened Shadow Play by Peppers down in Southbank, the brand’s reputation is still very much in tact with Peppers Docklands. It just may very well be the city’s most conveniently located premium boutique, almost hugging the iconic Southern Cross Station which remains Melbourne’s most connected transport hub, both for trains and for those valuable airport buses. 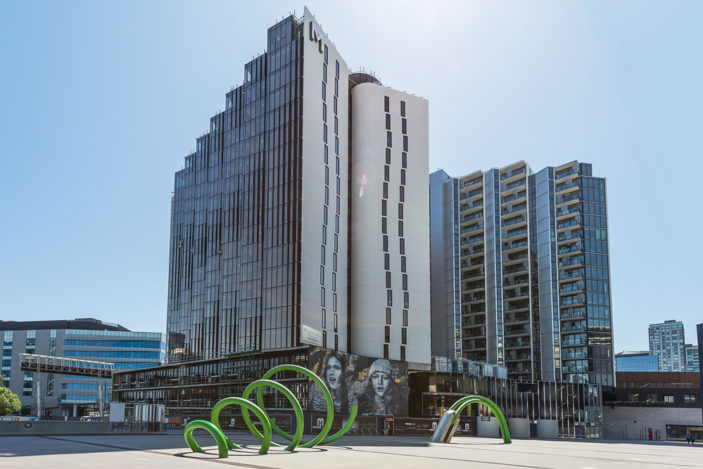 Proximity to Southern Cross also means guests have easy access to just about everything worth seeing, eating and doing in Melbourne’s CBD. Thanks to the free tram zone, zipping around and dining at hotspots like Flinders Lane and Spencer Street is as easy as hopping on and hopping off.

A block up from the Victoria Harbour precinct of restaurants, the hotel is most valuable for visiting guests hitting up an event at Marvel Stadium, which is so close it could almost be considered part of the hotel. Many of the 87 spacious guest rooms actually look out to the stadium (or the visually uninspired Bolte Bridge) and you need only step outside to find yourself on the concourse. 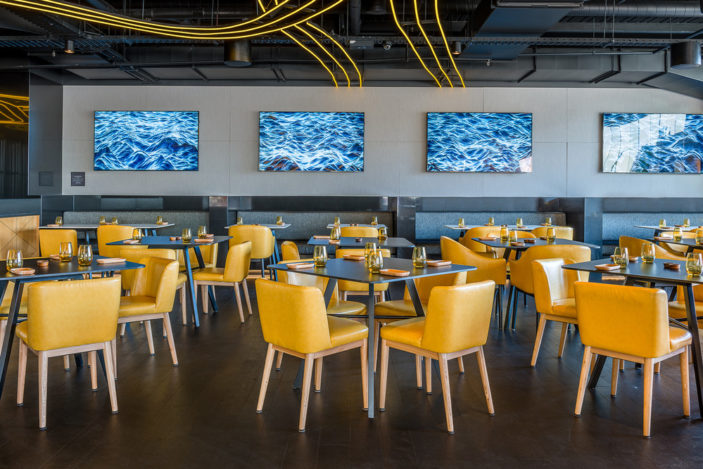 If you’re not in the mood to step outside and explore Melbourne’s celebrated all-hours dining scene, MOMAMI seems like a fine alternative. The hotel’s sole restaurant, taking up a large chunk of the lobby, is fuelled by St Ali coffee – some of the best in Melbourne – and a smart menu that should satisfy anyone regardless of personal taste.

For a la carte breakfast, the Maple Pecan Pancakes with honeycomb and salted caramel popcorn is divine, and the kitchen does up an outstanding Chilli Scramble with chorizo, brioche, onion jam and soft herb.

I wasn’t able to try the dinner, but come nightfall it seemed like it’s not only hotel guests making their way to MOMAMI – always a good sign for a hotel restaurant. The kitchen plays it safe here, but options like Braised Lamb Shoulder with kale, seasoned grains, tahini labneh and spiced pit, or Moroccan Half Chicken, can hardly ever go wrong. Especially with the restaurant’s love of local produce.

The reception desk extends into a bar with stool seating for anyone looking for a late-night tipple, rounding out the drinking and dining options here.

For anyone looking to step outside to eat. The proximity to Southern Cross Station makes it much easier to zip around to the city’s more far-flung suburbs, so I suggest heading on out to Box Hill and diving headfirst into one of the country’s best Asian dining scenes. 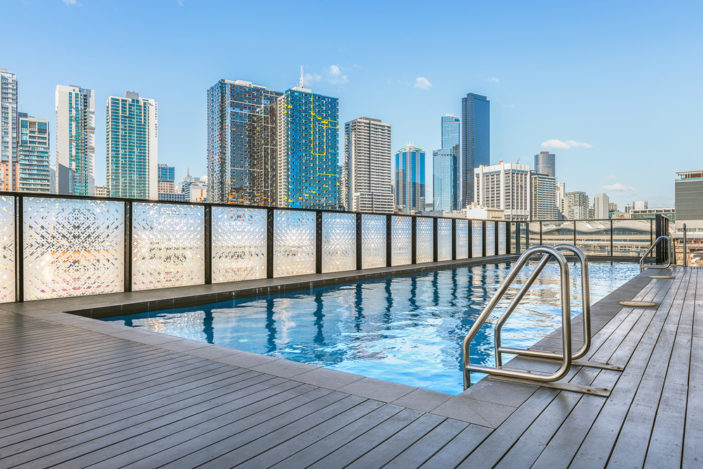 The hotel is attached to a mixed-use residential building with a few other businesses. This adjacent building is where you’ll find both the outdoor heated pool and generously sized fitness centre. Although that sums things up in terms of amenities, they certainly don’t feel like after-thoughts, and both offer city views. 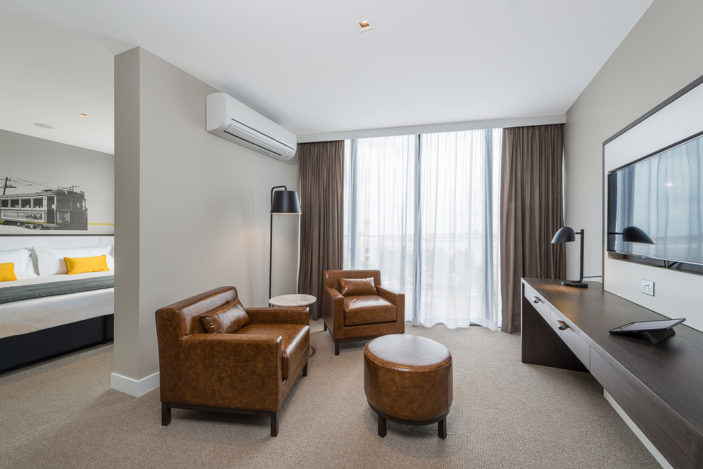 With 8 room categories across the 87 rooms, there are plenty of options for such a relatively small hotel. And although they trade character for safer, more pared back accommodations, these are generously appointed, very comfortable rooms with a welcome focus on living space. Do note that because of the building’s strange shape, a lot of these rooms differ within their category.

My Peppers Deluxe King Suite was nice and contemporary with small pops of sunny yellow fit into the black and white scheme to being a bit of individuality. Most notable, as far as visuals go, is the raw sketch of a tram above the bed, a nice nod to location and a small way to stamp the hotel’s sense of place.

A pair of antique looking leather chairs face a 40″ wall-fixed TV (with Foxtel) out in the lounge room, which stretches from entry past the pristine bathroom. There’s a lot of disused space in between, which is great to maximise space, but takes away from any character the room was going for.

An odd triangle shaped balcony is accessible from the bedroom, not necessarily looking out over anything impressive but Melbourne’s urban sprawl and the nearby stadium.

Families looking for a convenient place to stay in Melbourne should be more than happy here, seeing as many of these rooms can be linked up to create larger spaces.

It’s all quick and efficient here. Nothing particularly notable, but nothing at all to indicate anything but the usual great service you’d get at a Peppers property.

The hotel is quite expensive for what it is. Peppers Petite, the lowest category rooms, start from an average nightly rate of $289. Which is much more expensive than Melbourne’s best Peppers property (the aforementioned Shadow Play). Still, value is bumped up due to the location which is perfect for those attending any event at Marvel Stadium, as well as anyone needing to hang close to Southern Cross Station.

The writer stayed as a guest of Peppers Docklands