On a recent, starry night Melbourne’s reimagined retail icon Melbourne Emporium, created and hosted by creative visionary Baz Luhrmann, promised to be one of the biggest, most celebrated events on Melbourne’s calendar this year. We were lucky enough to head along to the launch, melting into the glitz and glamour as this lush shopping precinct spread itself over the city. 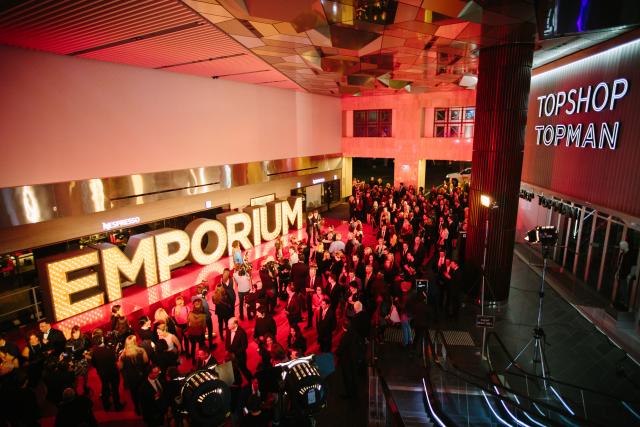 Imagine walking through the doors of the retail Emporium along a red carpet, celebrities and models to the right and us non celebs to the left. The huge wording of the EMPORIUM sign on our right designed for the night, screams out at us, and with the many light bulbs around each word, its pretty breathtaking. As I wander through the throng of people, I see about fifteen waiters in black and white uniform with trays of champagne, and don’t mind if I do, I take my glass and soak the atmosphere around me.

The Emporium is set like a Baz Luhrmann movie, plenty of colour and reimagined glamour incorporated into Melbourne stories. Very tall woman dressed in the most stunning outfits with uber hats are walking around with jockeys, strategically placed near stunning velvet horse statues. This represents the Melbourne Cup. A huge tennis ball hangs between a section of the levels and its all glitzy with a fairy-like lady spinning up and down from it, this pays homage to our Australian Open and all this creates a walking experience that tells the history of Melbourne. Apart from these features, there is plenty of action everywhere you look. A band is set up near L’occitane store and its belting out vintage tunes as people get their wiggle on or feast on the delightful food offerings. Three woman dressed in vintage 1920’s outfits mash grapes with their feet in a huge barrel dancing and laughing. Continue down the way and you’ll find five gorgeous gals in lingerie with strategically positioned large white feathers literally parading and dancing inside the Furla store. 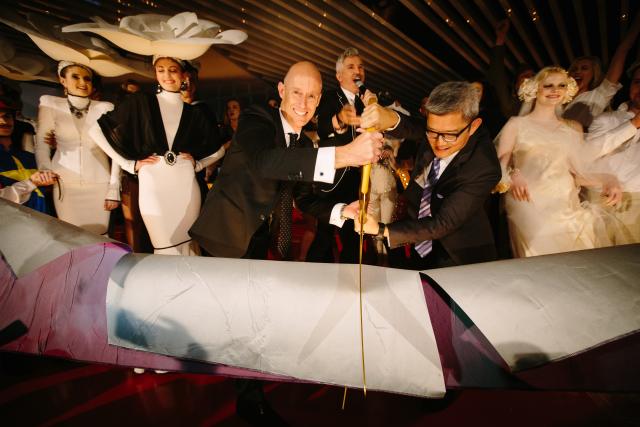 Around the Kate Spade New York store thousands of streamers are hanging from the ceiling and underneath on the dance floor, sailors in their white and blue uniforms and soldiers in their brown uniforms from back in the day are all coupled with ladies wearing female versions of the uniforms and they are dancing the charleston, inviting us to join them. Soaking up the energy in the room I continue around to outside the Aveda store area, and a kooky band is playing on a stage in amongst the gladiolas featuring a singer wearing Dame Edna glasses, paying homage to the star no doubt, and this set has many people stopped in their tracks.

As I keep moving on, imagine this; you’re walking around the retail precinct where your eyes follow the shimmery snow falling from the ceiling into the gaps below or perhaps you’re gazing at the gold round flakes gently falling from above or watching the smoke that floats down from the ceiling that make many people gasp at the amazing illusion. Reminiscent of waterfalls from an imaginary world, the world of Baz. The effect is sensational and you truly feel like you’re on a movie set.

As I continue I find a large sign on a second stage, similar to the Emporium sign, but this one says REIMAGINE and this is what Baz is commissioned to do as the creative director for the night’s opening to the Melbourne Emporium, to bring a touch of reimagined glamour to the launch. 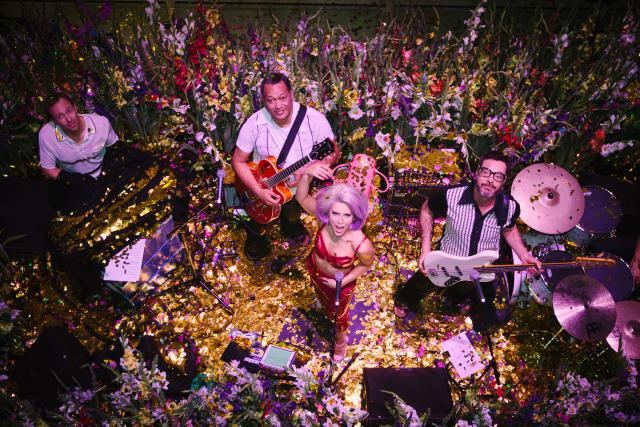 The stage starts to get busy and behind the white winged angels comes Baz, welcoming us and telling us we are all extras for the night; part of the event and that it’s time to party. Managing director Angus McNaughton and a GIC (Government of Singapore Investment Coorporation) representative welcome the juxtaposition of old and new history then they cut the ribbon to officially open the Melbourne Emporium. The crowds go wild and dancing ensues.

There are 220 stores from around the globe including the opening of Michael Kors, Dion Lee, Coach, Topshop, Calvin Klein, Victoria’s Secret, Ted Baker, Furla and Diesel. The launch of the Urban Kitchen precinct on the lower ground a few months ago will be joined by Supercharger Wholefoods along with Jones The Grocer, Alison Nelson’s Bar New York and Waffee, a waffle and coffee restaurant. 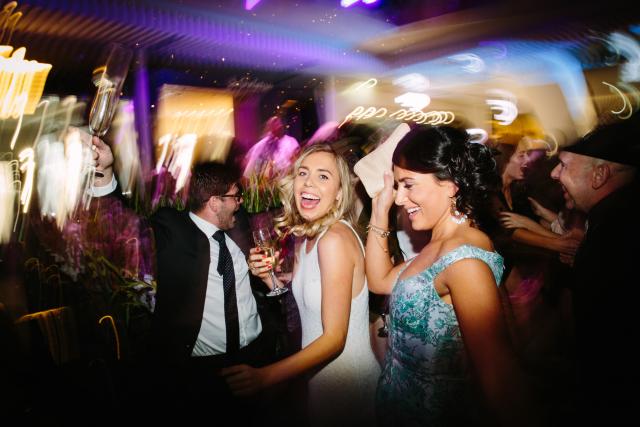 On this night of nights there are fifteen hundred people here and around one hundred performers and I managed to have a chat with Vince Colosimo, Harrison Craig, Drew from Big Brother and news presenter Jo Hall. Also spotted were swimmer Michael Klim, Timomatic with Talia Fowler, models Scherri-Lee Biggs and Samantha Harris.