L.A-originated Paligroup have officially stretched out of the Golden State and headed up coast, opening their first boutique hotel in Seattle in what is easily the city’s most valuable location.

The aged building, which can be found on the National Registry of Historic Places, has been reborn with a vigorous, and surprisingly aggressive, use of deep mossy greens, the colour which can be found all throughout the hotel and its guest rooms. This unique choice of palette defines the hotel’s affable design, along with a balance of the building’s original features with a modern chic brief made up of slick leather sofas, decorative vintage suitcases, cleverly positioned plant life, and a great selection of books.

Impeccably polished checkboard floors leading up to a highly ornate and eccentric lounge area are the first things you would see on entry. To your right, a beautiful polished wood desk where young, hip staff breeze through check-in. To your left, the hotel’s excellent The Hart & The Hunter, a retro-styled southern U.S.A diner that, on my visit shortly after the hotel’s opening late last year, already seemed like a local favourite.

The popularity of Hart & Hunter isn’t much of a surprise. It’s the same restaurant concept bought up from Pali Melrose, where Chef Kris Tominaga worked up a reliable reputation, particularly for his exceptional buttered biscuits. Here, the kitchen helps uphold that reputation, where those famous buttered biscuits sit on a menu alongside Southern staples like smoked BBQ chicken, collard greens, fried green tomatoes, and others, all elevated with produce direct from Pike Place Market.

The charming space, the only in the hotel that replaces green with creamy white-washed walls, also hosts a boutique coffee shop with its own street-facing takeaway window, and an elegant bar lined with plenty of worldly spirits and affable bartenders more than willing to suggest some very well-balanced cocktails. A night cap here is a must.

Of course the hotel needed a superb restaurant. Pali stands opposite what is perhaps some of the toughest competition in the country (that, of course, being the aforementioned Pike Place Market).

It’s reason enough to stay here, being so close to an icon that has long been regarded as one of the best and most historic open-air markets in the world, with businesses such as Russian bakery Peroshky Peroshky, cheese monger Beecher’s, and Pike Place Chowder – all superstars in their own right. There are also plenty of other things to do at Pike Place Market, including regular improv comedy nights, admiring/being grossed out by the famous Gum Wall, and the amusing flying fish of Pike Place Fish Market. There is perhaps nothing more thrilling than watching helplessly as a big fat fish comes flying at your face before you’re saved by a dextrous fishmonger.

While the hotel is far from the highly sought hipster hustle of Capitol Hill, guests are an easy walk to Seattle’s upscale shopping which includes a Nordstrom flagship and Barneys New York. Given the proximity to Pike Place Market, it’s also a matter of walking down some steps to reach Seattle’s vibrant waterfront district, where the city’s famous aquarium and fresh seafood houses can be found. 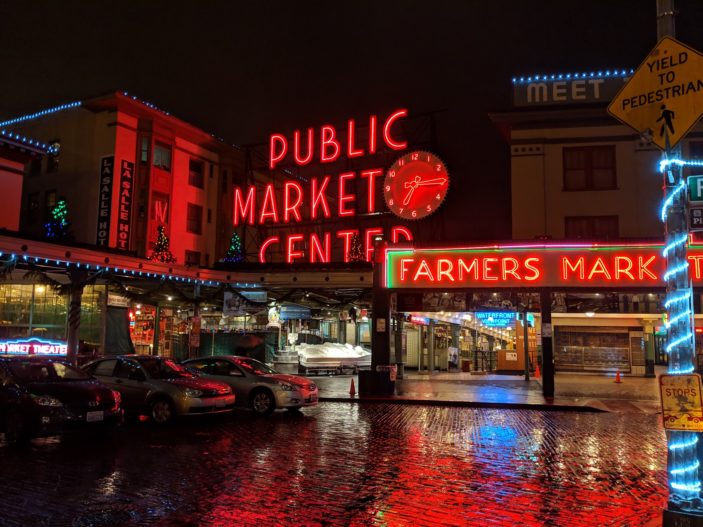 Walk a bit further towards the famed Space Needle and you’ll be at Seattle Centre, which is where the excellent and highly attractive Chihuly Garden and Glass museum and wondrous Museum of Pop Culture are located – both entirely worth the price of admission. 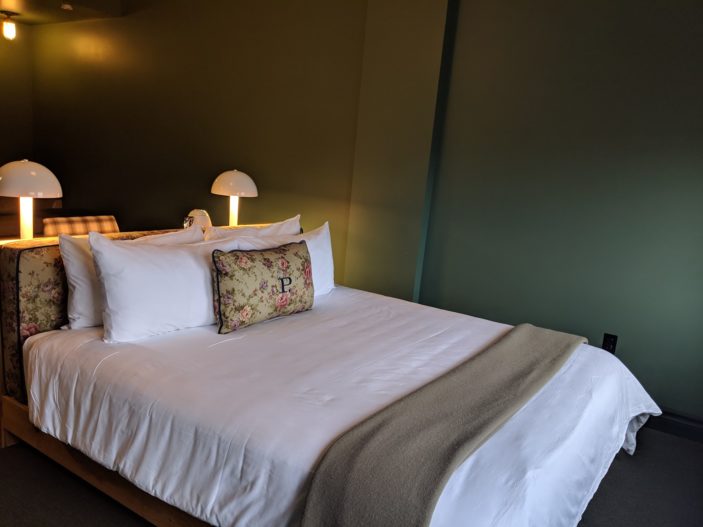 Palihotel wears the “Luxury-Boutique” tag proudly, and has a smart sense of practicality too. Several of the 96 guestrooms can be shut off from the rest of the hallway and adjoined for larger groups, and some even feature bunk beds, speaking to the large cohort of families that are regularly tempted by Seattle’s relaxed Pacific Northwest lifestyle. 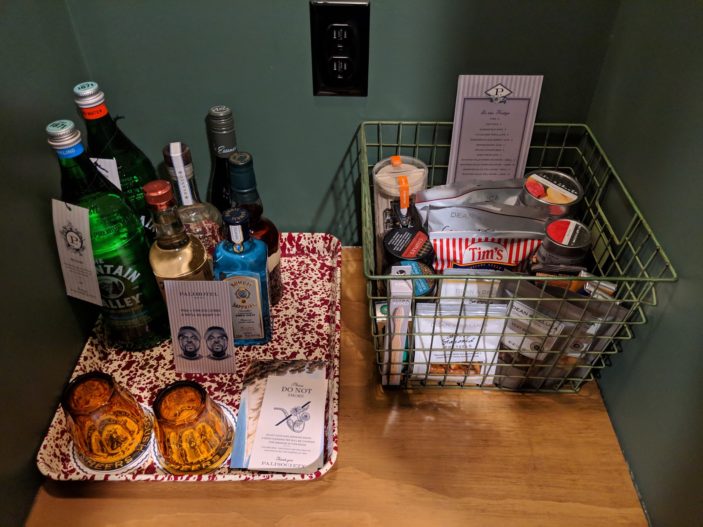 Much like the lobby, these rooms are fantastic expressions of Paligroup’s imagination. The love of retro features is obvious with the presence of Smeg bar fridges, which sit below wire baskets generously filled with snacks, flipping the traditional mini bar with a bigger focus on showcasing Seattle’s many artisans. 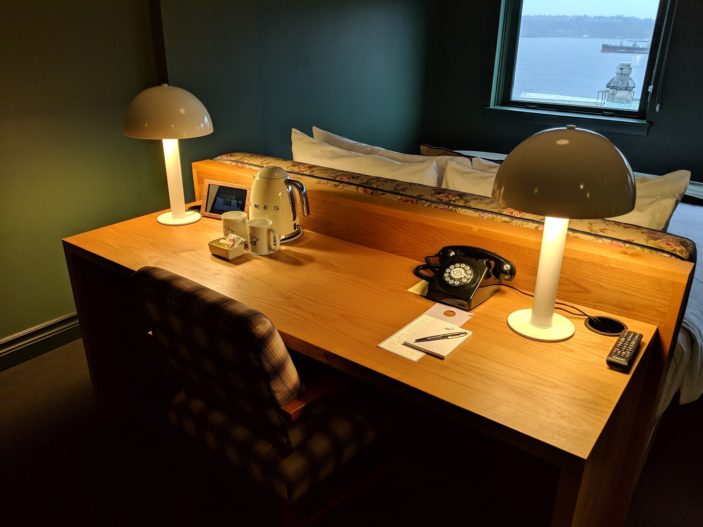 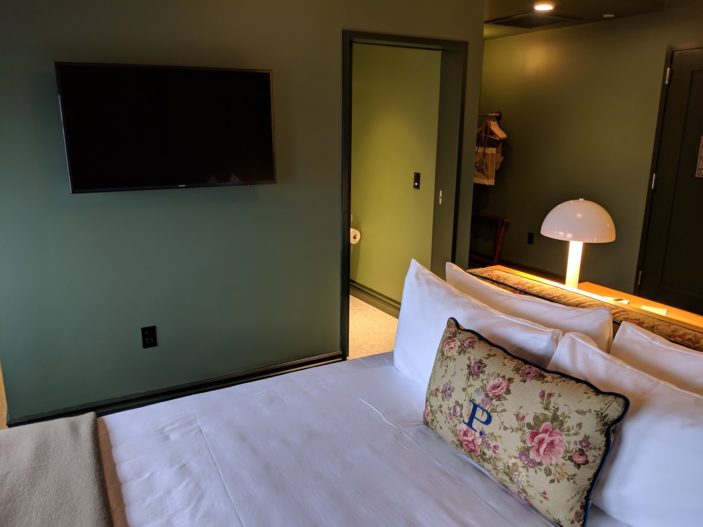 My King Studio had its exceedingly comfortable bed almost in the centre of the room, with a long working desk attached to its floral head board. Peering out over the energetic scene of Pike Place Market and the Elliot Bay Waterfront each morning eliminated the need for a morning coffee, reiterating just how valuable this location is – especially for first-time visitors to the city. 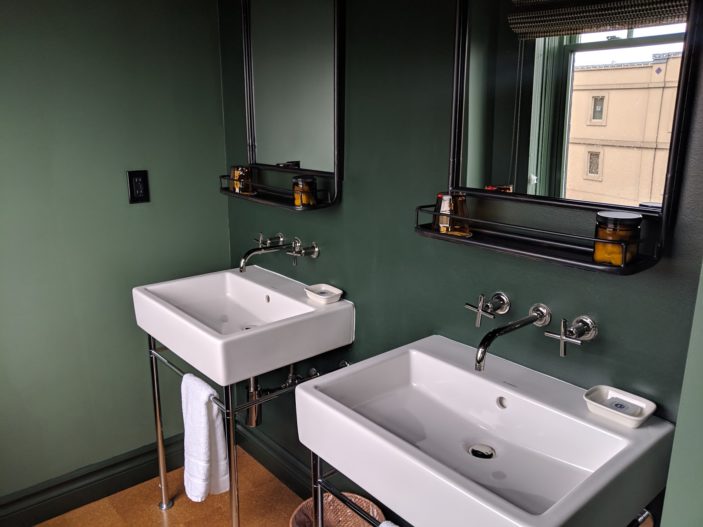 Hotels built into heritage listed buildings almost always have interesting design choices when it comes to their bathrooms. It comes with working with such an old, modern space, and here is no exception. While it may seem odd, the bathroom is separated into two distinct space, where towards the far wall is a wooden floored space just for twin sinks, standing apart from the more modern space dedicated just to the shower. While strange, it works rather well, giving the room a bit more character.

At around 31 sqm, it’s a comfortable, inviting space that fits in perfectly with the hotel’s casual atmosphere.

With limited space, there’s no pool or gym on-site. Though with the central location, alternatives to the latter are easy to find.

Paligroup evidently put a great deal of emphasise on personable, approachable service. Everything is all fast, breezy and efficient when it comes to crunch time, but there’s something infectiously relaxed.

You’ll be looking at an average nightly rate of around AU $280 for a room at Palihotel Seattle. Not quite pushing into the more expensive luxury hotels dotted around the city, but not too cheap either, considering there are very few amenities. Still, it’s worth paying that little bit extra to be in such a perfect location.

Though lacking the amenities of nearby full-service hotels, Pali gets by brilliantly with its comfort, design, food and service. Somehow, with the amount of growing hotel brands in the U.S, Paligroup have managed to find a distinctive little design groove that feels entirely modern, and that’s perfectly represented by this Seattle property. Plus, you really can’t get any closer to Pike Place Market – and that’s worth everything, especially for visiting foodies.

The writer stayed as a guest of Palihotel Seattle.

All photos by the writer unless otherwise noted.