In June 2017, one of the most influential and celebrated albums of all time – The Beatles‘ Sgt. Peppers Lonely Heart Club Band – celebrated its 50th Birthday in the USA. As a self-confessed Beatles obsessive, I took to the skies and headed to the permanent Cirque du Soleil production in Las Vegas, Love, which is set in a world of Beatles music. It was my third time seeing the show since it debuted more than a decade ago, though my first since the show enjoyed an major update in July 2016, to coincide with its ten year anniversary.

Since it debuted, Love has become a show loved by Beatles obsessives and the curious alike, due to the spectacular mix and excellent visuals, alongside the breathtaking acts of human strength and precision that the Cirque brand is known for. Even with Paul and Ringo still touring, it’s the closest you’ll get to seeing the Fab Four live, with the show made to feel as much as a concert as it is a acrobatic spectacle. 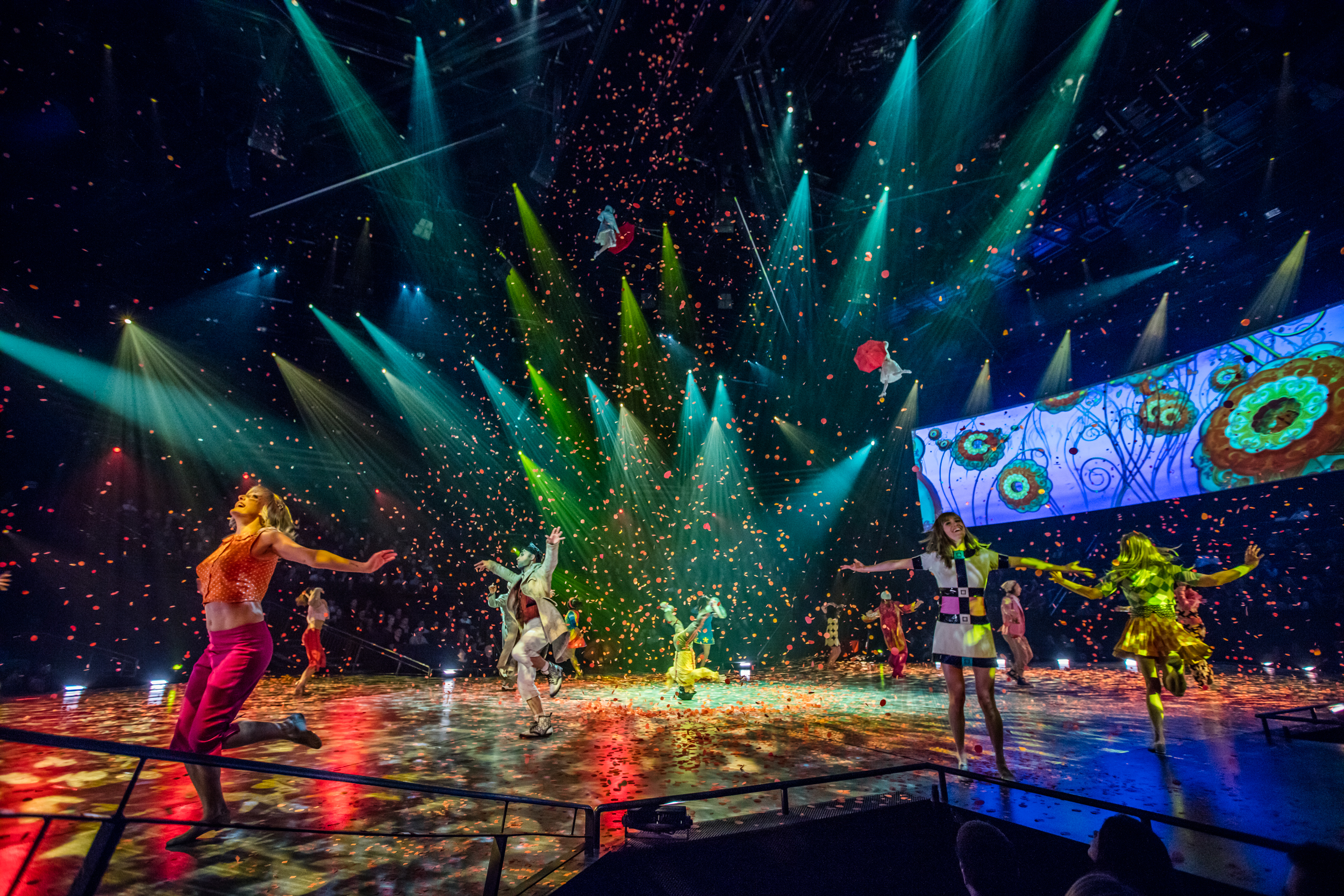 The 2016 update of the show made quite a few significant changes to the production. Firstly, and perhaps most importantly, there’s the updated soundtrack. George Martin’s son Giles Martin has remastered the mix, taking out “I Am The Walrus” and adding in “Twist and Shout”. The mix has never sounded better in the theatre, too, thanks to a refitted speaker system, that extends into your very seats. To say it sounds crisp and pristine doesn’t give it enough credit – this is something you have to experience for yourself.

Many of the show’s most memorable numbers remain virtually untouched, “Lucy in the Sky with Diamonds” and “Within You Without You” for starters. The former sees Lucy literally flying through a sky of diamonds which descend above you (I get goosebumps writing about this!), and the latter seeing children fly above the clouds in a bed, as a massive sheet covers the audience.

Elsewhere, new projection technologies have been added to “modernise” the show, which remains in a unique “In The Round” format. This is as immersive a Cirque show as you’ll ever see. And when you witness the production behind it, you’ll understand why it’s not a show capable of touring. The updates are mainly seen through new screens, videos and projections which the performers interact with. In “Lady Madonna”, where the performers turn lights into “paint”, we see augmented projections being used to their full potential. However this isn’t as striking as it is when transparent screens descend and bring to life Harrison’s hand drawn characters, as in “While My Guitar Gently Weeps”. Other additions, like mobile video screens, have also been added to bring extra immersion to proceedings.

The Beatles themselves appear more often, too. You’ll see Ringo’s face during “Octopus’s Garden”, Lennon during “All You Need Is Love”, footage of McCartney during “Yesterday” and more silhouettes and videos elsewhere. 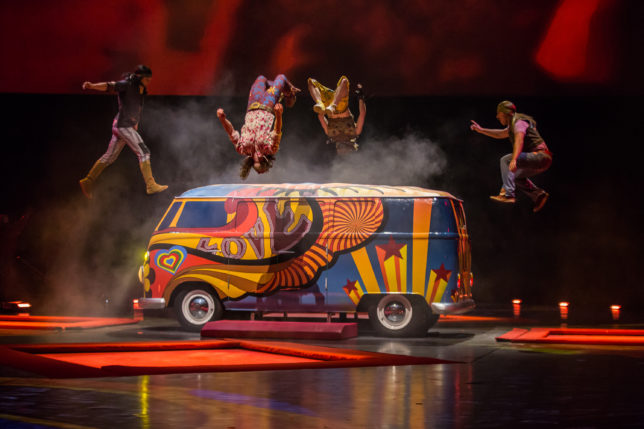 The only downside of this being that the spectacle of the technology itself means the impact of the performers is slightly reduced. And after all, at the end of the day, you are here to see them in action. Nonetheless, they embark on some pretty amazing feats of human precision and talent as the Beatles soundtrack plays – as they fly above the audience on ropes and fabrics, on rollerskates and on flying beds. They dance with extreme flexibility and skill, and seduce one and other, as they embark on revolutions and free love, travel through Octopus’s Gardens and meet Lonely Heart Club bands. There’s plenty of new choreography to be seen in the updated production, too, especially in “Here Comes the Sun.” It’s fair to say they explore a lot of material in just 90 minutes. 90 minutes which go by way too fast.

Considering “I Am The Walrus” is my favourite Beatles song, I was sad to see it move out of the set, but beyond personal bias it’s hard to fault this spectacular show. Though it’s not the most awe-inspiring Cirque show in Vegas, you’re not here for that – you’re here to witness some of the best songs of all time, interpreted from a production level by the world’s greatest Circus, in collaboration with The Beatles themselves. And the fact that there are some awe-inspiring moments along the way is a welcomed bonus. All of this combines to make Love one of the best shows you’ll ever see, anywhere in the world – and I’m including the real Paul McCartney in that comparison. Love is worth the trip to Las Vegas alone; believe me when I say I’ll be going back for a fourth time.

The Beatles Love by Cirque du Soleil usually enjoys ten performances a week at the Love Theatre in the Las Vegas hotel The Mirage. For tickets and more details, head HERE. And as of last year, guests are invited to take a behind-the-scenes look at the show in the free “Magical Technical Tour”. 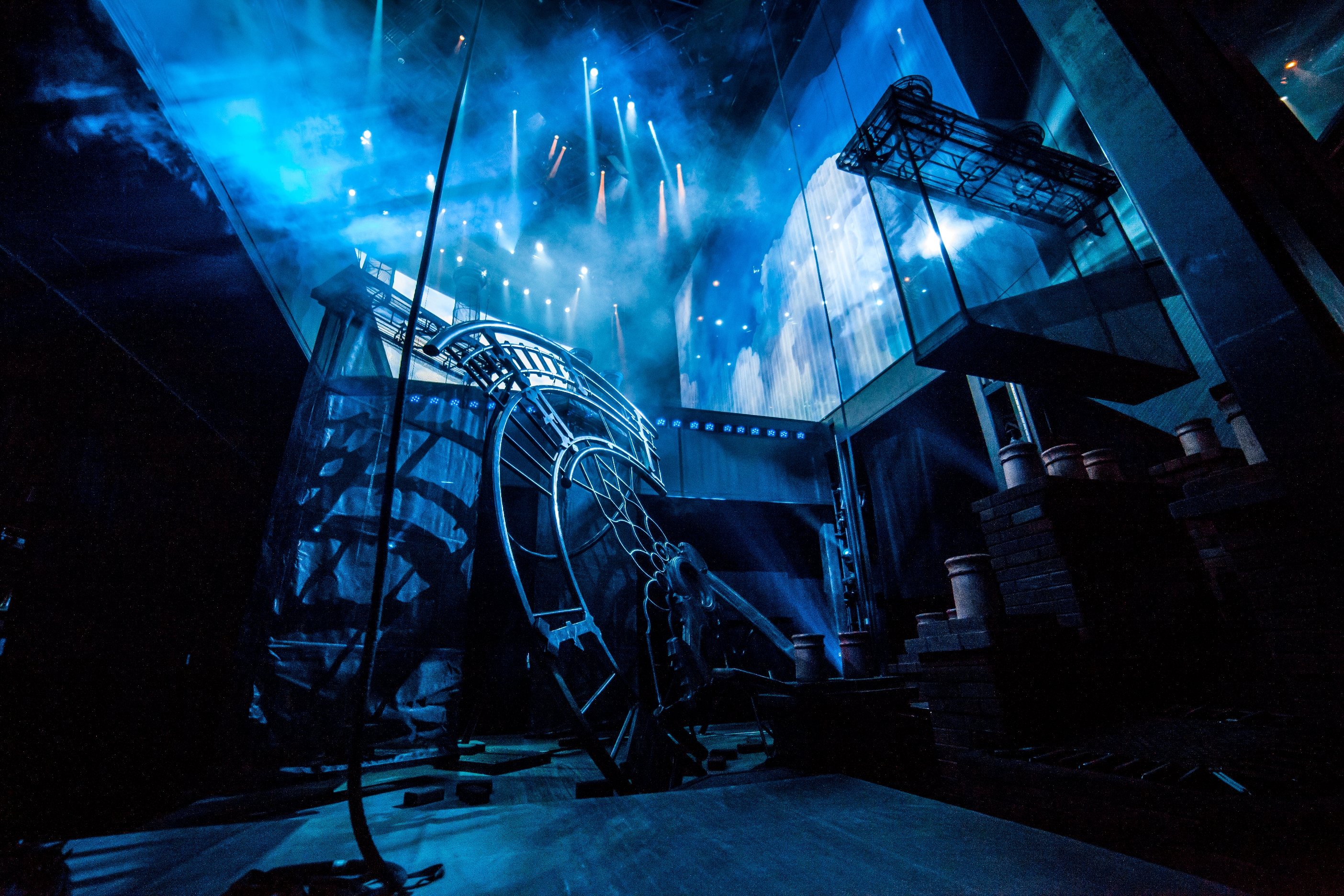 This complimentary open house showcases the production’s state-of-the-art technology, one-of-a-kind set pieces and more. As part of the presentation, attendees will enjoy a demonstration of the show’s powerhouse opening number “Get Back” – removing artists from the equation to highlight the production’s immense capabilities.

The Magical Technical Tour is held inside the LOVE Theatre at The Mirage Hotel & Casino every Saturday from 1 p.m. to 1:30 p.m. Guests will receive an exclusive ticket offer, which may be redeemed at the box office. All ages are welcome.

Photos provided by Cirque du Soleil and used with permission.