From Politics to Parties: The History of Mambo Surf De Luxe 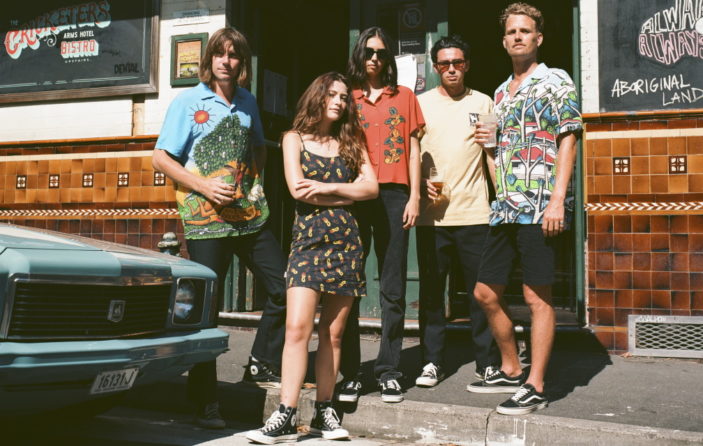 In case you missed it, iconic Aussie brand Mambo has returned to its roots with the launch of Mambo Surf De Luxe. Merging old and new, the brand will celebrate iconic heritage artics such as Reg Mombassa and welcome a new era of talent, including Nathan Seahan and Chloe Kovska.

Aussies everywhere have a memory of the brand; this is why we wanted to take a little walk down memory. Going back to the OG, Mambo was born in the ’80s and quickly became a symbol for Australian culture, with art, surfing culture, humour, and music synonymous with the brand.

You may not hear much about Mambo anymore, but this integral Aussie fashion brand has a fascinating history that dates back to 1984. To give you a bit-sized idea, here’s a bit of a chronology to give you an idea just how epic this evolution has been.

If nothing else, consider this a primer should Mambo ever come up in your local pub trivia. Like, did you know the brand designed the official Australian team uniforms for the 2000 Olympics? You do now.

1984:
Mambo was founded beneath a Cinzano beach umbrella in the beer garden of the Cauliflower Hotel in Redfern, armed with only a mission, beer, and some cheese cubes.

1986:
Reg Mombassa, a former member of famed Sydney rock group Mental As Anything, joined the team at Mambo in 1986.

1991:
An exhibition of original artwork by Mambo artists, “Freeze Art Lovers,” was held at the Ray Hughes Gallery in Sydney. Police arrived shortly after the bar opened to break up the crowd three times larger than the gallery’s capacity.

1994:
In 1994, Mambo released its self-congratulatory 120-page graphic-packed, typo-littered history book “Art Irritates Life.” According to one reviewer, he knew even less about the corporation after reading the book than he had previously.⁠

1995:
In 1995, Mambo created the “Chirac” t-shirt to protest the French government’s resumption of nuclear weapons testing in the Pacific. $40,000 was donated to Greenpeace from the sales.

1998:
In 1998, Mambo unveiled its “Pauline Hanson Redneck” t-shirt with $15 of each shirt donated to the National Aboriginal and Islander State Development Association (NAISDA), raising $110,000.

1999:
Mambo received a phone call from the Australian Monarchist League, which demanded that the firm stop selling its new “Queen of Australia” shirt, claiming it was “extremely offensive to the majesty of our Queen and sovereign.” The caller is left on hold for twenty minutes before hanging up.

2000:
The year 2000 was a big year for Mambo – designing the official Australian team uniforms for the Sydney Olympic Games. ⁠

2003:
Mambo released the “What, me sorry?” t-shirt in 2003 in response to PM John Howard’s stubborn refusal to issue an apology to the stolen generations.

2004:
Mambo launched the Abuse of Power Party.⁠ Its policies included; closing down Australia’s detention centres, and extending the Australian national anthem to include references to pig shooting, dwarf throwing and jelly wrestling. ⁠The party signed up 5000 members during the annual City to Surf.

2007:
Mambo sends a letter to the Pope, inviting him to join as a brand ambassador during his planned visit to Australia.

2008:
Mambo collaborated with The Chaser in 2008. Their first t-shirt, “Hat In A Cat,” – identified by The Chaser as ‘Dr Sue Us’ – sold well… and attracted a cease and desist letter from Dr Seuss’s attorneys.

2010:
Mambo was named “one of the most influential brands” by UK publication Cult Streetwear in 2010. ⁠

2015:
Mambo celebrated its legendary 30-year existence by showcasing the “30 years of Shelf-Indulgence” – an exhibition on show in Melbourne.

Once again, here to support the little guy, the brand is also looking forward to supporting artists, musicians and charities through various initiatives throughout the year. In 2022 they are also dedicated to going above and beyond best practices, committed to supporting and working towards a fully sustainable and eco-friendly product.

You can check out Mambo Surf De Luxe HERE.